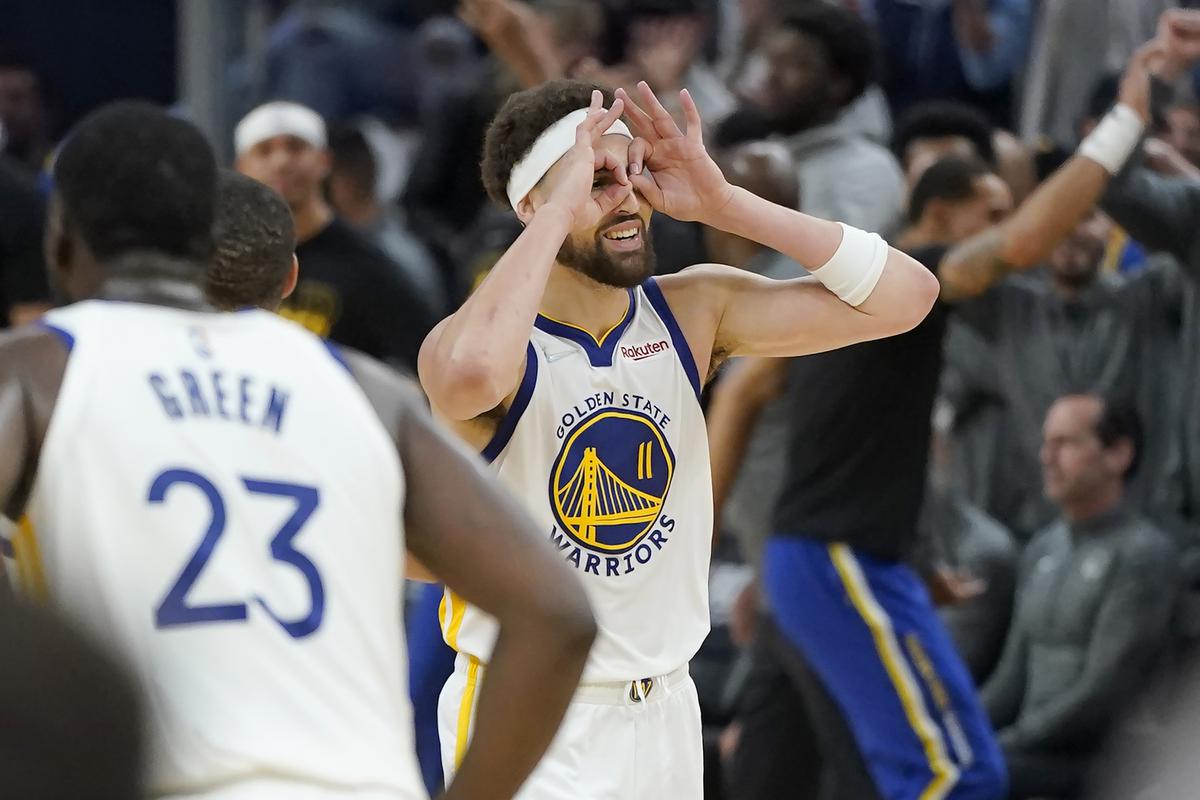 SAN FRANCISCO — Stephen Curry came off the bench for a second straight game and showed he’s healthy at last, scoring 34 points to lead the Golden State Warriors past the Denver Nuggets 126-106 on Monday night for a 2-0 lead in their best-of-seven playoff series.

Nikola Jokic had 26 points and 11 rebounds before being ejected with 7 minutes left following a second technical and was held back from a referee, after his first technical came with 2:31 to go in the third. The MVP candidate’s emotions ran high all night. In the first quarter, Golden State guard Gary Payton II patted Jokic on the backside and the big man turned and came toward Payton when Curry stepped in and held the 7-footer back and Poole came in to help.

Jordan Poole started for Curry again and contributed 29 points — just missing a chance to become the first Warriors player ever to score 30 in his first two playoff games.

Klay Thompson added 21 points, while Curry shot 12 for 17 with five 3s as Denver again had no answer defensively for all of the Warriors’ dangerous perimeter threats.

The series shifts to Denver for Game 3 on Thursday night.

The Warriors are rolling with the backing of a raucous home crowd, winning their seventh in a row overall after a five-game winning streak to close the regular season.

Golden State used runs of 16-0 and 23-4 late in the second quarter to erase a 43-31 deficit and take a 57-51 lead at the break. On one particularly dazzling sequence, Draymond Green bounced a pass to Poole who threw it behind his back to Thompson for a layup that made it 54-47. Green’s defense flustered Jokic again.

Austin Rivers grabbed at his left hip and went down hard after getting hurt on a drive then Thompson hit a jumper on the other end in the 5-on-4 advantage before Rivers exited with 10:04 left in the second quarter. He returned with 46.7 seconds to go in the half.

The Nuggets went ahead 43-31 on Monte Morris’ layup at the 7:25 mark of the second quarter and the Warriors answered with 16 straight points. The Chase Center crowd went crazy on Poole’s 3 with 3:38 remaining.

Curry entered for the first time at the 6:32 mark of the first to a roaring ovation and immediately hit a jumper. With 16 first-half points he became the 27th player in NBA history to score 3,000 career postseason points.

He showed a full range of moves including driving to the basket with a fervor and making a 3-pointer while falling to the ground.

Denver took a 7-0 lead 90 seconds into the game as Jokic made four quick free throws. But the teams combined to start 6 for 21 with three field goals apiece — and the Warriors were 1 for 7 on 3s.

Golden State missed veteran Andre Iguodala, the 2015 NBA Finals MVP who sat out with neck spasms after playing just more than 13 minutes in the series opener.

It marked the first time he, Curry, Green and Thompson played together all season.

Nuggets: Jokic shot 9 for 20 and has missed all eight of his 3-point tries in two games. … Denver had intended to inquire to the NBA about DeMarcus Cousins’ back-to-back technicals in Game 1 that led to his ejection with 10:28 left in the game, though coach Michael Malone wouldn’t provide details about whether the Nuggets had indeed spoken to the league and said he would keep any such discussions private. Cousins scored five straight points during one second-quarter sequence. … Denver committed costly turnovers once more, 18 of them leading to 25 Warriors points — something Malone stressed couldn’t happen.

Warriors: Curry, Poole and Thompson combined to go 31 for 52 from the floor with 13 3s. … While the Warriors held a 41-35 rebounding advantage in the series opener, Denver led 47-35 on Monday. … Golden State is 17-4 in Game 2 of the playoffs dating to the 2015 title run when the franchise captured its first championship in 40 years. … The Warriors planned to take Tuesday off then practice in San Francisco on Wednesday before flying to Denver.

Malone on the Nuggets needing to improve communication in Game 2: “It was definitely addressed during the game, yesterday, this morning. The good thing is when it is horrendous it usually can’t get any more horrendous so there’s only one way for it to go.”