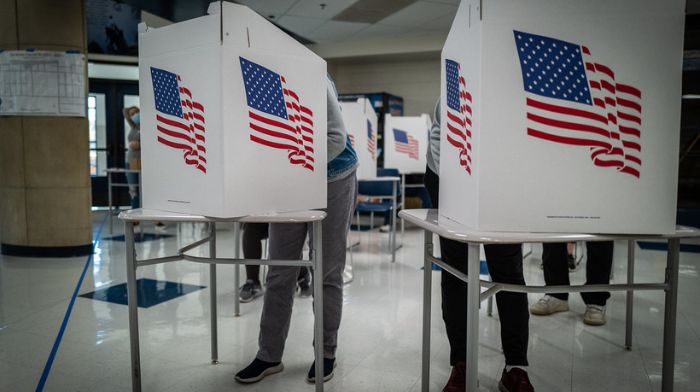 The battle to determine what exactly is “misinformation” before the November midterm election is on.

But the even bigger question is, who gets to decide what is or isn’t misinformation?

The state of Connecticut thinks they have an answer: a “security analyst” whose job it will be to monitor and “address” online information.

Connecticut’s Ministry of Truth
CT Office of Secretary of State has requested $150,000 to hire a full-time security analyst to “monitor and combat election misinformation

The New York Times reports that the security analyst will go to sites such as 4-chan, Gettr, and Rumble which are described as “fringe,” and “far right.”

The analyst will then snitch on any problematic memes or rumors they find to other social media companies. Think of the whiniest little brother in a crowded back-of-the-car, but this one gets paid $150,000.

The money comes from a set-aside in the state budget, which explains: “Over the last few election cycles, malicious foreign actors have demonstrated the motivation and capability to significantly disrupt election activities, thus undermining public confidence in the fairness and accuracy of election results.”

So in addition to surfing “far-right” websites, the “security analyst” will also presumably be on the lookout for well-known hacker Vladimir Putin.

Why suddenly Twitter pads my feed with leftist trash and blue checks slanted left? Big tech winding up for more election misinformation influencing. Fight back. Support lawsuits against these publishing houses that live off of government perks.

Connecticut isn’t the first state either. Colorado has a “Rapid Response Election Security Cyber Unit.” It not only oversees what goes on online, but also identifies “cyber-attacks, foreign interference, and disinformation campaigns.”

Other states like Arizona, California, Idaho, and Oregon are looking for ways to counter what they view as online misinformation.

Of course, ostensibly private social media companies have already been deciding what people are allowed to see.

Twitter said it would be giving labels to certain candidates, and releasing something Orwellianly termed “pre-bunks” in order to “pre-debunk” alleged “disinformation.”

In other words, all put together, the internet will be even more policed and less free than the last few years.

Has Stacey Abrams ever conceded? She insists that the election was rigged against her. Why isn’t she attacked for misinformation?

RELATED: After U.S. Soldiers Were Told To Go On Food Stamps, Congress Finds Another $12 Billion For Ukraine

Who Gets To Decide?

While the majority of Americans regardless of political affiliation only want fair and honest elections, the entire premise of “misinformation,” “disinformation,” and who gets to determine what is what is an extremely unsettling one.

The Biden administration has already tried it in the form of something called the “Disinformation Governance Board.” Back in April, a woman named Nina Jancowicz was tapped to be its Executive Director.

Just one problem. Jancowicz herself had spread disinformation by giving credence to the false claims that Hunter Biden’s laptop was “Russian disinformation.”

She also said of an effort by the RNC to recruit poll watchers for the 2020 presidential election, “These sorts of national-level calls for people to show up are a recipe, frankly, for intimidation and violence.”

If Twitter is so worried about “misinformation” why is CNN still here?