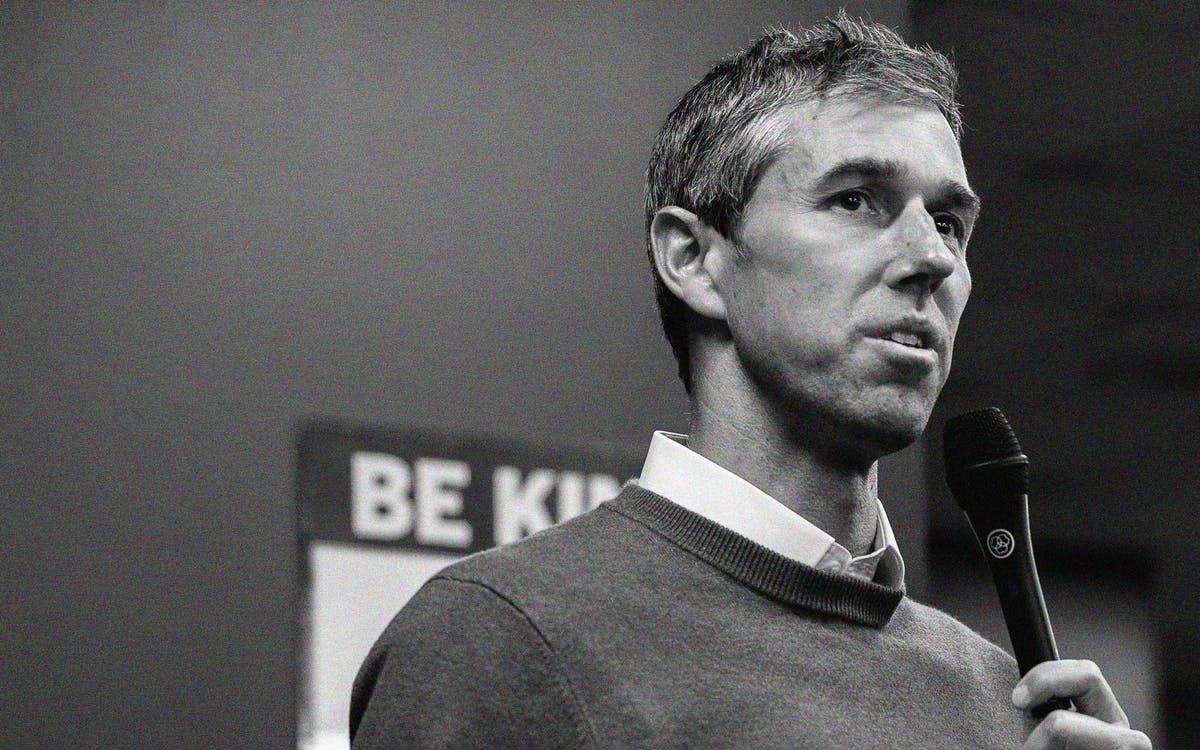 When Democratic candidates for statewide office tour Texas, an atmosphere of doom and despair typically haunts their campaigns, like a pack of wolves shadowing a wounded elk. In 2014, I rode on state senator Leticia Van de Putte’s campaign bus as she embarked on a multiday expedition to South Texas toward the end of her race for lieutenant governor. The bus, which departed from San Antonio, ran for two hours before breaking down around Falfurrias. A few weeks later, she lost by nearly twenty points.

Beto O’Rourke’s first statewide campaign, when he challenged Ted Cruz for a U.S. Senate seat, by contrast, felt enchanted—the political equivalent of a Disney-animated romp with singing woodland creatures. For a year and a half, O’Rourke roamed the state, putting thousands of miles on a truck and a minivan that did not break down, visiting towns other statewide politicians of both parties wouldn’t waste time in. He played with dogs, livestreamed even the smallest events, and had (sometimes awkward) meetings with local elected officials in conservative parts of Texas, trying to find areas of agreement. He spoke often, and in a pretty idealistic manner, about his hope that Democrats he fired up in small red towns would be empowered to create lasting change in their communities.

It felt wrong, somehow. I chatted with O’Rourke about how smoothly things seemed to be going after a picture-perfect event at the hip tent-hotel El Cosmico in 2017, in the decidedly not red town of Marfa, on one of those summer nights in West Texas when the sun sets in a peach-colored sky a little after nine. When I asked him what he would do if protesters—anti-abortion, pro-gun, whatever—started actively disrupting his events, denying him space in the public square and threatening the premise of his campaign, he said he would engage them in dialogue. That struck me as naive, but to my surprise those protests never materialized in the 2018 election. He seemed, in all things, charmed. Of course, he still lost, but by an unexpectedly small margin, all the while boosting down-ballot candidates in suburban districts he helped to flip.

Since then, O’Rourke has had an eventful few years, as has the nation, and his second campaign for statewide office has been more difficult. Gun-rights protesters and open carriers have been showing up at his events since well before he launched his bid for governor, drawn by O’Rourke’s rash proclamation, during his brief 2020 presidential campaign, that he favored confiscation of semiautomatic weapons. And this past weekend, in a small community an hour north of San Antonio, the O’Rourke campaign, hoping to hold a town hall, tried and failed to secure the use of four different event venues and was effectively run out of town.

This debacle took place in Comal County, the southernmost of the two counties in the Interstate 35 corridor between San Antonio and Austin, which ranks as one of the most Republican areas of the state. But there’s still reason for Democrats to think they can do better here. In 2016, Trump won Comal by fifty points; in 2020, he won by a little more than forty. The county’s major population center, New Braunfels, is one of the fastest-growing cities in the nation.

When O’Rourke’s gubernatorial campaign set out to hold a town hall in Comal County, it aimed not for New Braunfels but for Canyon Lake, population around 30,000. That community, remote and deeply conservative, was the kind O’Rourke had made a special effort to visit in 2018. This time, however, news that O’Rourke would be coming set off agitation in Canyon Lake, especially on social media.

The campaign first announced that O’Rourke would speak at Maven’s Inn & Grill. Some locals threatened to boycott the restaurant if it hosted the event, according to the local news website My Canyon Lake. On Facebook, the restaurant’s patrons made clear their displeasure. “So I heard y’all are hosting Texas’s most famous drunk driver on Saturday,” one wrote, referencing O’Rourke’s 1998 arrest for driving while intoxicated. Maven’s soon canceled the event. Another woman, voicing what clearly was a minority view, objected. “Knuckling under to bullies,” she wrote. “This is how democracy dies and autocrats rise.”

The campaign then announced that it would hold the town hall at Canyon Lake High School. (It’s not uncommon for politicians to rent out school gyms and auditoriums to hold events.) Shortly thereafter, officials with the Comal Independent School District quickly reassured county residents that the event had not been “fully and properly vetted internally,” that the campaign had prematurely announced the town hall, and that the district did not, as a rule, allow rallies to take place on school grounds. Facebook commenters believed they now had Beto on the run. “DON’T BE SURPRISED TJAT BETO WON’T STEAL SOMETHING OUT OF COMAL CTY. OR BIRGLARIZE SOME BUSINESS,” wrote one man, with the tone that’s typical among users of the social network.

The campaign looked for a third venue. It believed it had found one in the Canyon Lake Resource and Recreation Center. But the center, too, backtracked. The head of the nonprofit group that runs it said his team was worried about “safety” at the event and that O’Rourke was polarizing. The campaign then briefly planned to hold an event at the nearby Whitewater Amphitheater, but that offer was rescinded too.

Finally, the campaign gave up plans for the Canyon Lake event and instead held a rally on private property in New Braunfels. Guests could learn the address of the event only when they RSVP’d. On Saturday, O’Rourke appeared on a pastoral Hill Country lot to speak with a few hundred supporters who had hung with him through the turmoil. (On Monday, O’Rourke tested positive for COVID-19; the event was held outdoors.)

He began by hitting a familiar note: that his campaign was going to go visit every corner of Texas and engage with everyone. Many parts of the state are “so often written off or taken for granted,” he said. “This campaign is different. We’re going everywhere, talking to, listening to everyone, writing nobody off, taking no one for granted. And we’re especially interested in places where folks have not had their voices heard.”

Then, for some twenty minutes, O’Rourke ran through his platform. While an image of O’Rourke as a left-wing crusader predominates in parts of the left and right, when he speaks in Texas he focuses on broadly popular and moderate policies. Paying to train nurses to ease the state’s shortage of those essential professionals; giving schoolteachers a raise; fixing the electrical grid; expanding Medicaid; fighting political corruption; reducing property taxes. He dreamed of a government that was “not so interested in the culture wars” and more interested in making Texans’ lives better.

But to paraphrase Leon Trotsky: O’Rourke may not be interested in the culture war, but the culture war is interested in him. It was striking that O’Rourke was extolling the benefits of reaching out to Texans of all political persuasions before a crowd made up almost entirely of his loyal supporters—having been unable to deliver his address in a community of folks he had yet to persuade.

During the question-and-answer period following O’Rourke’s address, a man told the candidate that he “just wanted to apologize to your campaign for the fiasco it took to get you here.” The man said the experience was familiar. “This happens to all of us as Democrats living in this county.” He urged his fellow party members to assert their presence and to say forcefully that “we live here and we have a different point of view than other people do.”

O’Rourke agreed. “There’s real power in what the gentleman just said,” he noted. He added that he had seen the shock on some Texans’ faces at rallies when they saw that so many of their neighbors were Democrats. When the stigma against being one wears down, he said, “that will give people permission to believe.”

For Democrats, it’s a hopeful and optimistic message. But is it a realistic one? The stigma against the Democratic party in many parts of the state seems to be even stronger than when O’Rourke ran just four years ago. How much listening can a politician do among folks who don’t care whether he hears them?