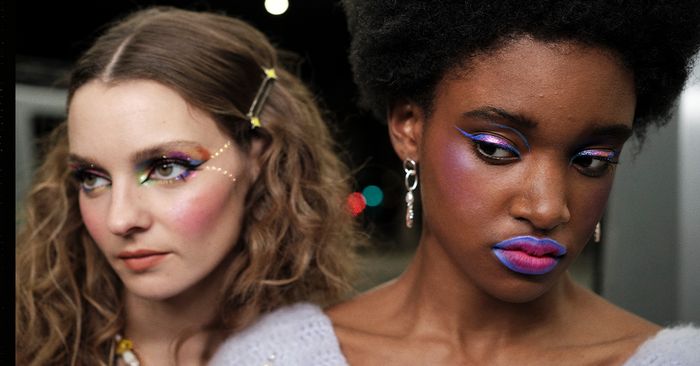 When Euphoria premiered in 2019, one of the biggest breakout stars was the makeup created by the show’s makeup department head, Doniella Davy. A showstopping array of crystal-studded lids, glitter tears, neon graphic eyeliner, and other ocular adornments seen on its young stars became a game-changing inspiration for the beauty industry. That’s why it wasn’t too surprising when Davy launched her own makeup brand, Half Magic. Though the brand is supported by A24, the studio that produces Euphoria, it’s all from Davy’s brilliant mind. The glitter eyeliner, lush eye pigments, and stick-on rhinestones all represent her signature aesthetic. That being said, there are also plenty of neutral options, and the line appeals to practically any type of makeup preference or mood.

The brand launched with an impressive assortment of color products. There’s the Chromaddiction Eye Paint + Liner ($24), which comes in matte and shimmer finishes and eight shades. The Glitter Pill Eye Paint + Liner ($20), which might bring Urban Decay Heavy Metal liner to mind, comes in four shades. Face Gems ($12), which are self-adhesive, are available in packs of iridescent crystals rhinestones, neon jewels, and cone-shaped studs for a punk-inspired look.

Lip products include Mouth Cloud ($18), a velvet-soft lip cream that comes in nine shades, and Sculptitude ($14), a handy dual-ended lip liner (you can also purchase them together via the Liptrik kits).

Being a makeup maximalist, I was more than excited to try the brand. From the whimsical fairytale-esque packaging to the rainbow-hued products, I knew Half Magic was made for me. I started with Chromeaddiction in Sky Juice (a rich periwinkle) all over my lid, and then used the Wing Magician to create a wing (shaped in the Half-Magic logo—aka the sparkles emoji). I was immediately impressed with how easy it was to apply the eye paint and how pigmented it appeared on my lids in just one swipe.

Next, I outlined the shadow with Glitterpill in Goblin (love the name) for a contrasting green-and-blue look and applied a small dab of Light Trap in Spiritually Complex on the middle of my lid.

For my lips, I lined them with Sculptitude in Up and At ‘Em and filled them in with Mouth Cloud in Invoice Attached. The lip color was an immediate win—not only for the perfect hot-pink shade but also for the formula. It was super pigmented from the jump (some pinks require a second or third application on me), and it felt smooth, moveable, and lightweight.

I was a ’90s teen, so I’ve always been a fan of face gems, thanks to Gwen Stefani and Bjork, who both wore them, the movie Josie and the Pussycats, and, of course, the underrated classic known as Showgirls. I decided to go small for my first go-round, and apply three small iridescent gems to the inner corner of my eyes and lash line.

When it came to application, I was pleased by how quickly it went, thanks to the tweezers and the self-adhesive aspect of the gems. Some might prefer to just buy regular face gems and stick to lash glue for application, but you can’t deny that this is a great option to have in a pinch. You don’t have to fiddle around with sticky glue, and I didn’t have any issues with the gems not staying in place over the eye shadow or glitter.

Overall, I was impressed by everything from the pigments to the gorgeous colors, and especially by the fact that I was able to quickly create a Euphoria-ready look in a matter of minutes. I’m also interested in what the brand might come out with next. I think a lid primer would be a great addition, as well as a colored mascara. I think this is a great brand for anyone—maximalist makeup pros, people who are curious about color or using face gems, and even neutral makeup lovers who can appreciate a legit formula.

29 Cool Fall Shopping Finds That Are Set to Be Huge

29 Pieces of Embellished Underwear That Are So Stylish