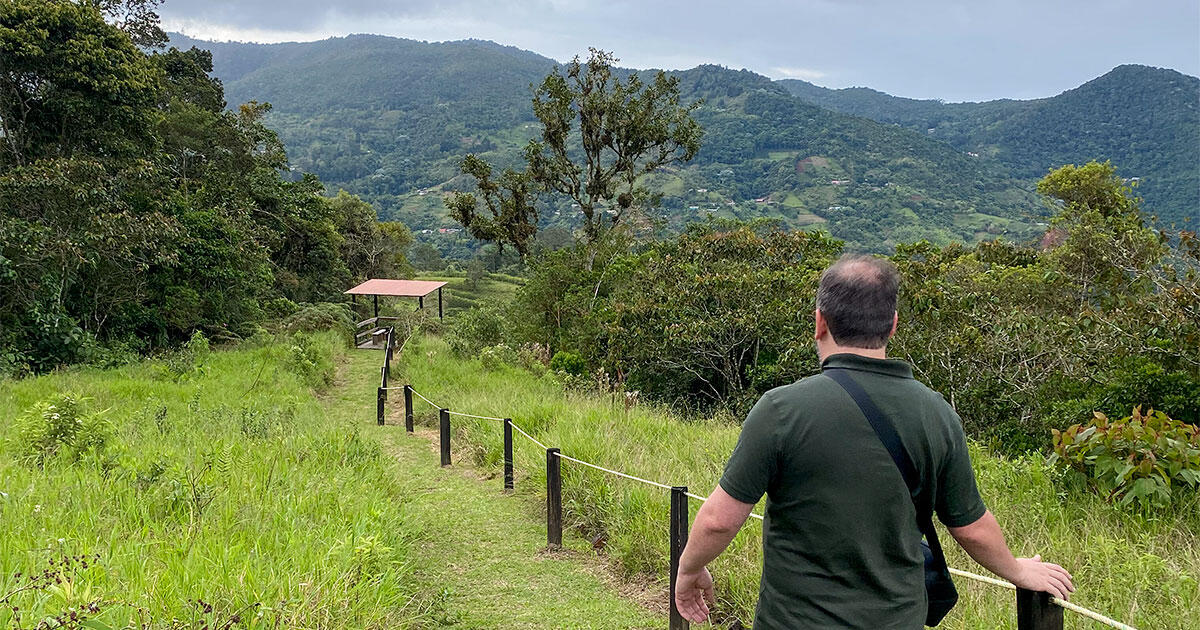 The tropical cloud forest of the Western Andes in Colombia is one of long-time nature recordist Juan Pablo Culasso’s favorite places in the world. He likes the cool sensation of rain and clouds passing through the vegetation. He enjoys the musical calls of a wide diversity of birds, such as the flute-like song of the Chestnut-breasted Wren, the elaborate melody of the Sepia-brown Wren, and the kazoo-like resonance of the Golden-crowned Flycatcher. He loves that the songs and chirps he records are crisp and clean, without the insect noises that are so common in other nearby regions like the Amazon rainforest.

Born blind, Culasso pays attention to the sounds of nature more than most birders; in fact, he can identify more than 2,000 birds by their song. Now he and his partners in Colombia have developed birding trails that are helping others who are blind or have low vision visit the cloud forest of San Antonio and enjoy the birds of the region.

The route consists of six separate locations in the popular Kilometro 18 district, named for its location along a highway that connects Cali with the port city of Buenaventura. The locations offer accessible paths and tours with specially trained guides, supplemented by an audio guide with recordings of 50 common birds in the region and partnerships with several landowners to preserve the cloud forest ecosystem. The region, an important bird area, is home to 300 avian species, and Culasso says it is the first birding tourism route for people with visual disabilities in the Americas. “There is no other example of a similar program in Latin America or the world,” says Culasso, who is from Uruguay and wants to see improved access to nature throughout the Americas.

Visitor Juan Gabriel Soto, who was also born blind, took his first-ever bird outing on one of the trails at San Felipe earlier this year. “It’s wonderful, because it gives you, as a blind person, autonomy,” he says. He went home that day with a new interest in birds, and now he tries to identify the sounds of birds from his home. “When you can identify them, you enjoy them a lot more,” he says.

The initiative arose from Culasso’s collaboration with Carlos Mario Wagner, the director of the annual birding festival Colombia Birdfair and the conservation nonprofit Asociación Río Cali. Wagner’s wife, Luz Adiana Márquez, had seen bird tours for the blind in Spain, and the pair were eager to try them in Colombia, hoping to expand opportunities for inclusive tourism and get more people interested in the region’s birds. But it was not until Wagner met Culasso, that the project became a reality. They won funding from USAID’s Natural Wealth Award, which supports the Colombian government in protecting ecosystem.

Wagner and his wife led efforts to identify locations and local community partners for the route. Using his knowledge of birdsong and inclusive tourism, Culasso trained local guides and tourist operators. In trainings, he asks for guides to try to experience nature as he does, challenging them to describe ecosystems without sight—for example, the feeling of humidity or fog. What also makes the project unique is that the tours can be arranged at any time, not just as scheduled special events. When inclusive tourism has limited availability, says Culasso, it hinders participation.

Training with Culasso, San Felipe Birding guide José Gregorio Hernández learned to take blind individuals through paths, teach them how to identify birds by their calls, and describe birds and their ecosystems to best help visitors form a mental image. Many of Hernández’s typical clients are photographers who he helps to find rare and colorful birds. He says the training has boosted his own birding abilities. “As a birder your ear is already in tune, but this experience has improved it a lot,” he says.

The route’s accessible infrastructure is also a critical component. Clara Cabarcas, owner of San Felipe Birding, says they identified and upgraded a 500-meter path within the cloud forest to remove walking obstacles and make it easy to access. They added a rope on the side to help visitors with disabilities move independently, and several poles feature QR codes that provide short audio descriptions of the birds of the region through a specialized app. So far, she says, five groups of individuals with visual disabilities have visited San Felipe Birding. When Soto stopped by with the Turismo Con Sentido, which promotes tourism for people with visual disabilities, he was especially impressed with the trail’s accommodations.

Motivated by the route’s success, the team is training guides and tourist operators in three new locations in Colombia, one in an Indigenous community in Guainía and in two rural communities in Cesar and Casanare. If they receive more funding, they hope to further expand. Culasso notes that this project is inspired by the many experiences and opportunities he has had in nature as a birder. “I considered [them] a privilege,” he says. “But it shouldn’t be.”

For the tour operators at Kilometro 18, the initiative is also an investment in increasing the number of overall visitors. According to the 2018 Colombian census there are almost 2 million people with visual disabilities in Colombia, around 4 percent of the population. But Cabarcas, the owner of San Felipe Birding, says having paths that are safer and accessible makes nature more approachable to a lot of people—not only those with visual impairments. Hernandez, the tour guide, said “right now birding is booming in Colombia. Everybody wants to do it.”

Wagner hopes that encouraging bird tourism can have a positive impact on conservation of this unique ecosystem. For example, the Multicolored Tanager, his spark bird, was a “ghost,” just four years ago at Kilometro 18. Thanks to local conservation efforts, today this beautiful bird is often seen—and heard—at locations like San Felipe Birding, he says. For the community, investing in birding and conservation is an economic investment. When nature is accessible, Culasso says, everyone wins.