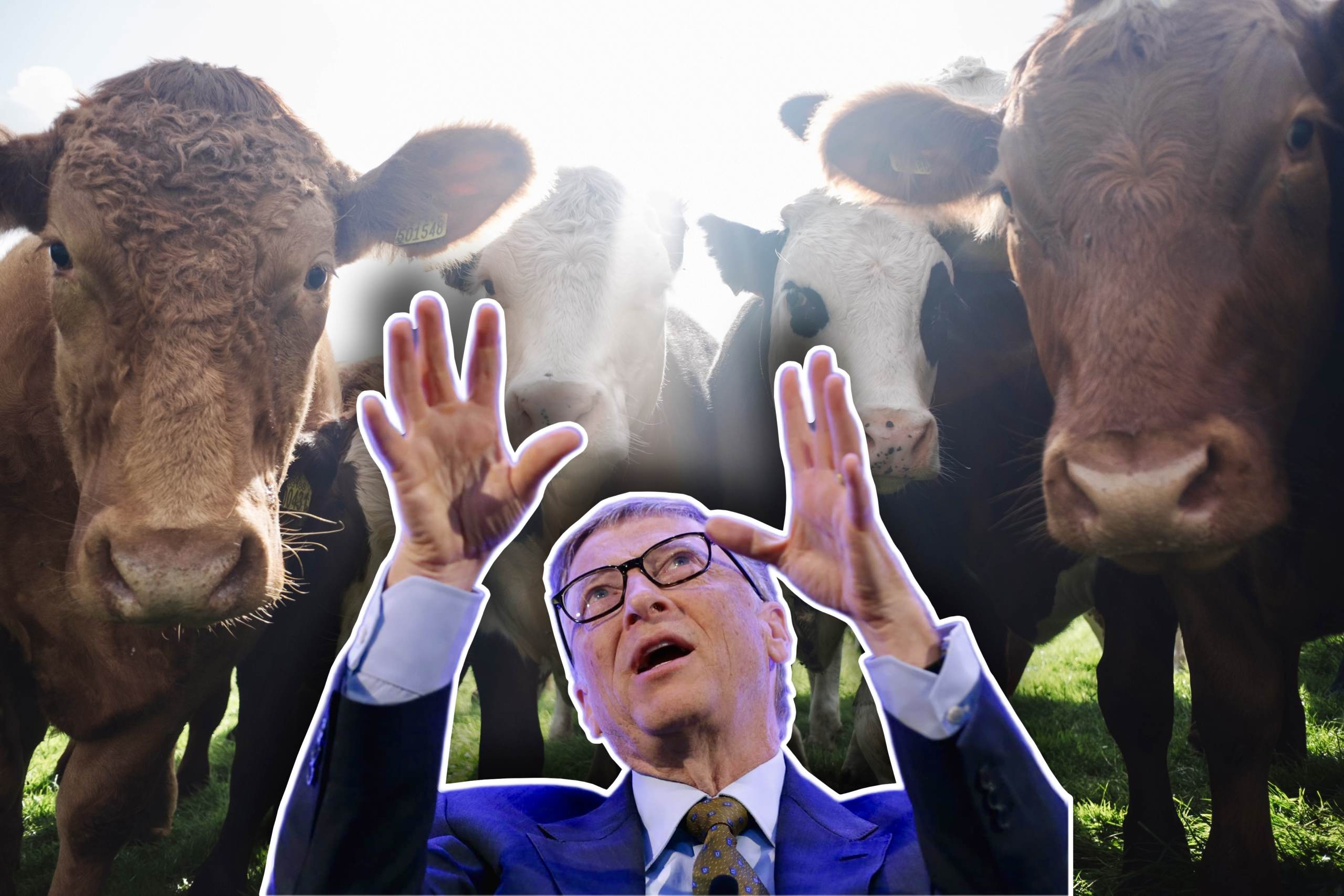 Microsoft co-founder and billionaire Bill Gates believes one of the solutions to combat climate change is to stop cows from burping.

Gates invested in a startup company in Australia that is exploring dietary supplements for cows in an effort to contain ‘greenhouse gas emissions.’

The funding will be used to accelerate the process of bringing Rumin8’s product to market.

TRENDING: RAY EPPS EXCLUSIVE!! Never-Before-Seen Leaked VIDEO of RAY EPPS Breach! Is the Government Doctoring Video to COVER FOR EPPS & Incriminate the Proud Boys at their Show Trial? THIS IS PART OF THE 14,000 Hours the Government Is Hiding! MUST SEE!!

“The Company conducted a Phase 2 seed round of funding, raising US$12 million to be spent on commercial trials in Australia, New Zealand, Brazil and the USA, product brand development, and pilot manufacturing plant development as Rumin8 moves towards commercialization of its methane busting feed additives.  Funds from both seed rounds totaled approximately A$25m,” the company said.

Rumin8 is an Australian climate technology company developing the next generation of feed supplements to reduce methane emissions from livestock.

According to Bloomberg, the feed supplement is made from synthetically-replicated bromoform, an active ingredient in red seaweed. This substance successfully reduces the formation of methane.

From the news release:

Rumin8’s most advanced product reproduces the bioactive contained in red seaweed (Asparagopsis) and has been shown to reduce methane production in livestock rumen by up to 95%, whether in liquid, solid or slow-release dose formats.

Rumin8 Managing Director David Messina said the laboratory results of Rumin8’s lead product replicated the methane reductions of red seaweed (Asparagopsis), but instead of harvesting from the marine ecosystem, the plant’s methane busting bioactive was manufactured and transformed into a stable feed supplement in our quality controlled laboratories.

“This breakthrough provides Rumin8 with the ability to develop a scaleable, consistent, cost-effective livestock supplements, which are inspired by nature, but have the potential to decarbonize the global livestock industry while providing productivity benefits,” Mr Messina said.

“The identification of Asparagopsis’s anti-methanogenic properties was a game changer in terms of reducing methane emissions from ruminants. Rumin8’s product will be able to be produced in a consistent, repeatable, manufacturing process which will be effective at reducing methane production and is expected to be significantly cheaper to produce and provide much more reliable dosing and outcomes.”

Trials of Rumin8’s first product at the University of Western Australia reduced methane production by more than 90% by Day 3, with almost total elimination by Day 5. The trials were also used to identify optimal dosing rates to achieve the required reductions in methane emissions.

“We acknowledge the diversity of farming systems used to grow animals does prove a challenge for methane reduction which has proven difficult to solve. We are developing a range of formulations which can be delivered to both feedlot and grazing animals,” Mr Messina said.

Last November, Rumin8 announced its methane-reducing feed additive will be introduced to the American market with a new location in San Francisco, Northern California.

“It’s an exciting time to be in the US with growing interest from the private sector to develop these technologies, as well as producers being open to trying new solutions that will help reduce livestock greenhouse gas emissions,” Rumin8 Chief Commercial Officer Kosta Stavreas said.

“The appetite for methane reducing solutions is astounding in the US market and participants in both dairy and beef have pushed open a door for us to enter the market,” he said.

Rumin8 has also begun two trials in New Zealand to test the efficacy and safety of its feed supplements in lowering methane production.

Two experiments, one with beef cattle and one with dairy cattle, will evaluate the efficacy of Rumin8’s product integration into New Zealand’s pasture-based systems.

The Gateway Pundit previously reported that New Zealand is the first country to have farmers pay for gas emissions from livestock by 2025, the Ministry for Environment announced. The proposed plan also includes “incentives” for farmers who reduce these emissions through feed additives.

The new proposal will likely affect food prices including beef, mutton, and dairy.

From Livestock to Laughing Stock: New Zealand Plans to Tax Cow and Sheep Burps in an Effort to Stop Climate Change

153 Years Ago, the 15th Amendment Was Ratified Granting Black Males Right to Vote