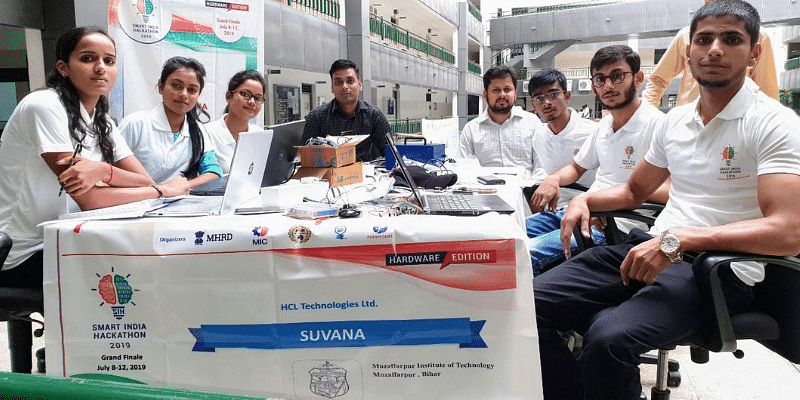 The Smart India Hackathon 2019 – hardware edition might have brought respite to an Indian city’s abject water problems. To conserve water and keep a check on its usage, Team Suvana, comprising of B.Tech students from the Muzaffarpur Institute of Technology, Bihar, built an ultrasonic residential water flow meter to monitor the usage of water, winning a cash prize of Rs 1 lakh.

Team Suvana was among 16 other teams competing for the hackathon held at REVA University, Bengaluru, which was one of the 19 nodal centres for the final round.

With water scarcity reaching its peak, this innovative water meter will help cities like Bengaluru and Chennai, which are predicted to go dry by 2020, to conserve water.

To start with, team Suvana tackled water usage at apartments, where each flat has a separate electricity meter, yet no water meter. The team realised that some tenants consume more water then others (employed tenants use less than families that stay at home).

Inevitably, some end up paying higher water bills than what is consumed. Further, if leakages are not fixed, the water bill escalates. Fitting a water meter is also a laborious process with the current strap-on design being un-affordable.

Their solution was an ultrasonic residential water flow meter to monitor the usage of water.

According to the team, they came up with the idea while working on a different problem statement for a college project.

How the meter works?

The meter uses energy conversion technology to convert vibrations into electrical energy, which then displays water flow as output in litres.

The device consists of a radio frequency module, which transmits data up to 800 m, and sends an alert to the user in case of malfunction.

“The cost of an ultrasonic water meter (currently in the market) is up to Rs 70,000. Although it is helpful, most people in India cannot afford it. Our model costs up to Rs 1,500, and is portable. You can install it wherever you want,” says Ankit.

Most devices available in the market must be installed in between a pipe, which involves cutting the pipe to make space for the meter. The diameter of the pipe and the meter also should match. The team claims that their product is affordable, and can be used in houses, apartments, and industries. With no cutting involved, Team Suvana’s meter can be installed on any pipe, irrespective of diameter.

“Most homes, especially apartments have a clubbed water bill. It does not matter how much one uses, the amount to be paid is the same. This meter allows the user to record the exact amount of water consumed, and pay accordingly,” adds another team member, Aditya.

With an unbeatable price point, the meter also makes one aware of water usage, therefore conservation too. The team’s main aim was to design a product which was easy to use, and affordable.

Now, Team Suvana’s project has been undertaken by the incubation centre of the Ministry of Human Resource Department (MHRD), to be launched as a startup.

What goes into your business gas bill?