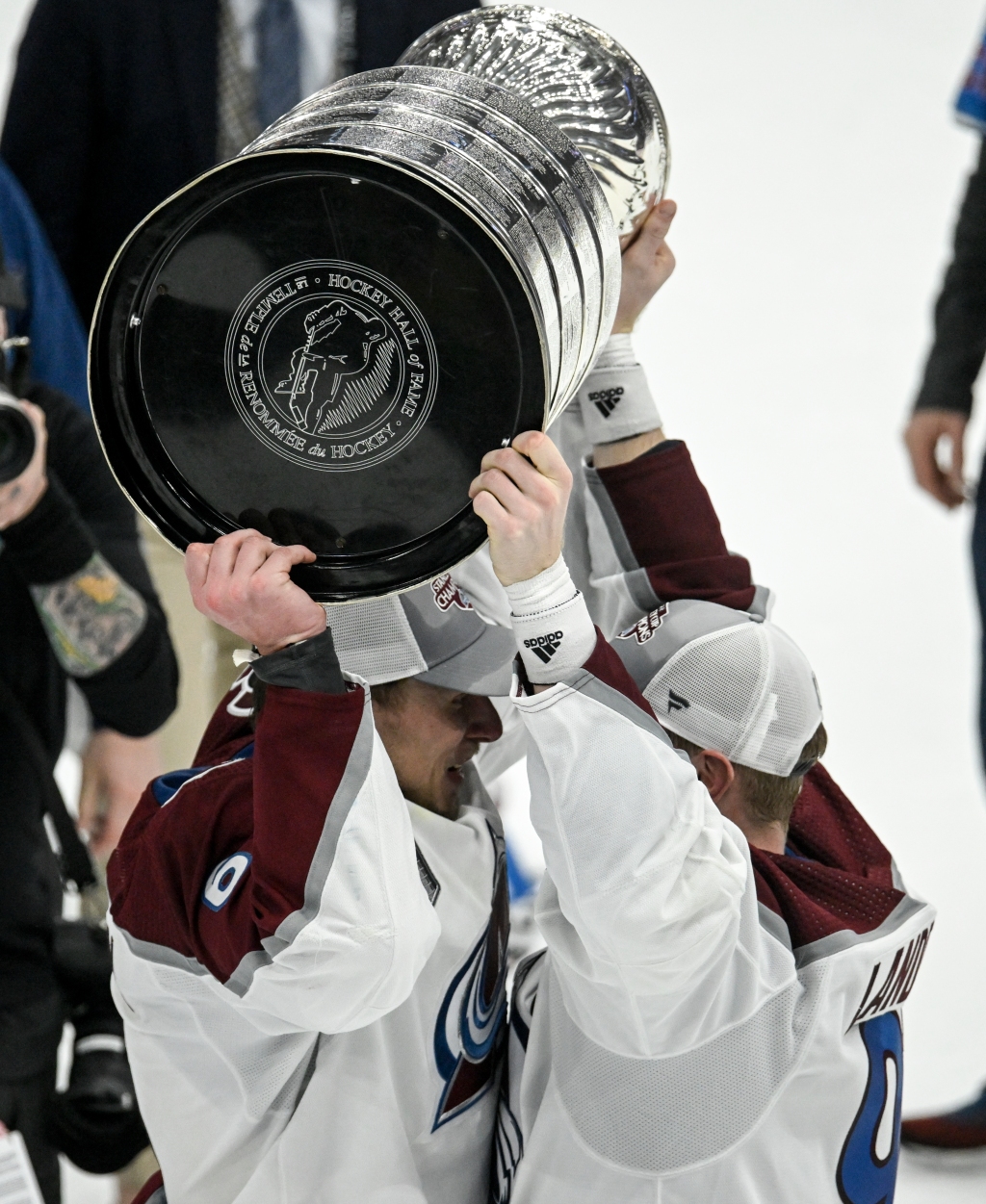 TAMPA, Fla. – The only thing better than winning the NHL championship? Sharing a big hockey hug with your best friend.

Before they went dancing with the Stanley Cup, Avalanche captain Gabe Landeskog and Erik Johnson carved out a little piece of ice amid the celebration of a 2-1 victory against Tampa Bay and embraced like brothers from different mothers.

“We were crying, telling each other how much we loved each other. How proud we were of each other. We’ve been teammates for 11 years. We finally climbed the mountain,” Johnson told me late Sunday, after Colorado beat the Lightning in Game 6 of the Stanley Cup Final to claim the franchise’s first championship since 2001.

It was worth the wait, because there is no more beautiful dance in sports than the one Landeskog took with a 139-year-old beauty. Landeskog lifted the 34.5-pound silver chalice over his head, welcoming the Cup back home to Colorado with a kiss.

And then? Landeskog handed the Cup to Johnson. Hockey besties. Sharing the greatest prize in the game. Atop the mountain. Together.

“To win it with E.J. is just so special. He has been my best friend since Day 1 … He was the first guy to reach out to me after I got drafted,” Landeskog told me. “I’ve been following my big brother for all these last 11 years. To be able to hand off that Stanley Cup and watch him skate away with it …”

Landy and E.J. have given heart and soul to this team, not to mention teeth and assorted body other parts, from years when the Avs weren’t easy to love through this crowning glory. Between them, Johnson and Landeskog have played 1,509 games, scored 344 goals and contributed 551 assists to the Burgundy and Blue.

A child led the Avs to their first championship since 2001. OK, check that. At 23 years old, baby-faced defenseman Cale Makar only looks like the kid that takes your hamburger order at the drive-through window. On a star-studded roster, Makar was the man, richly deserving of the Conn Smythe trophy as the playoff MVP.

But did you see Landeskog crawling off the ice to the Avs bench in the final desperate minutes of the Cup-clinching contest, in obvious pain after blocking a wicked hard shot by Tampa Bay forward Nikita Kucherov?

Landeskog “might be the most important person in this whole organization,”  Johnson said before this championship series began. “The demeanor he has, the type of player he is. Just a critical piece. He’s the cog that makes this machine go. The heartbeat of this team.”

And know what’s wild to think?

If not for kind twists of fate, both Landeskog and Johnson might not have shared a sweet hug they’ll cherish until their final breaths on this earth.

His NHL career could’ve ended when Johnson’s face hit the ice with a sick thud on Jan. 30, 2021, the result of a clean hit by Minnesota winger Jordan Greenway. Nearly five months after suffering a concussion, Johnson moved in a fog, from one uncertain day to the next.

“I was frankly sick of being injured. It was very disheartening,” Johnson told me.

“With a concussion, it can be a week for some guys and a month for others. Or it can be career-ending. And I didn’t really know where I fell in that spectrum … I wasn’t totally sure I was going to come back and play this year, to be honest.”

A phone call cemented the resolve of an often-injured player to give a quest for the Cup one more shot, at age 34.

Joe Sakic, the front-office exec that put this championship puzzle together, reached out to Johnson and said: “We’re going to need you if you’re feeling well enough to play.”

Landeskog was born in Sweden, but he proudly calls Denver his hockey home, because this is where he grew up as a hockey player after joining the Avalanche as a teenager in 2011. But after a decade run with the team, he was forced by the cruel business side of hockey to contemplate leaving in the wake of a disheartening playoff loss to Las Vegas.

Last summer, less than 60 minutes before he was scheduled to become a free agent, Landeskog agreed to a new 8-year, $56 million deal to remain with the Avalanche.

“It did go down to the wire, that’s for sure,” Sakic said.

“Maybe near the end I was a little worried, but I was hopeful we’d get it done. Both sides were really happy with the deal. He can finish his career as an Avalanche. That’s how it should be.”

Fighting back tears while standing on the ice of Amalie Arena, amid a celebration with family and friends, Landeskog said: “Management didn’t blow things up after losing in the second round for the third year in a row. They kept believing in us.”

Every championship dream is born of faith, earned through sweat and the strength to be there for your best friend in the locker room, to apply glue to a broken heart in defeat and share the tears of joy in victory.

“Gabe. Me. We won a championship. Finally. After 11 years,” Johnson said. “It’s amazing. But we did. And we did it together.”

And now? The names of Landeskog and Johnson will be engraved on the Stanley Cup. Together. Best hockey friends. Forever.