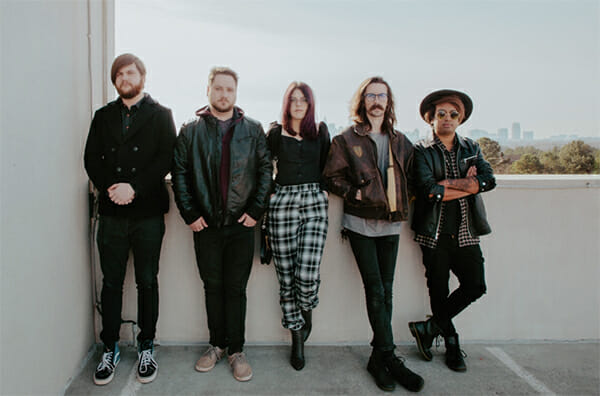 Is there anything more summer-y than a lovesick pop-punk song? With this latest release from relative newcomers to the scene, five-piece rock group glimmers, you can practically smell the sunscreen wafting up from a music festival lawn. Along with lead vocalist and keyboardist Maggie Schneider, glimmers includes lead guitarist Alex Downtain, rhythm guitarist and backup vocalist Alex Norrell, bassist Ari Patwary and drummer Jeremy Russell.

These close-knit musicians, who first met — in true ATL fashion — at the Masquerade, started in 2019 as backing band for Schneider. But within a year, after playing multiple gigs together, it no longer felt like a solo project to Schneider; it felt like a band.

In a “behind the lyrics” video clip on the band’s Instagram, Schneider said that this single is about her “own personal struggle between wanting to share my feelings and express how I feel for someone, but also being afraid that I’m going to lose that friendship. I think it’s a constant battle that we all as humans kind of go through.”

As for the library aesthetic, they’re following in a storied (pun intended) tradition — from Toto to Tears for Fears to Taylor Swift, libraries have served up many a visual feast of literary, musical storytelling. Since Schneider is also a massive fan of the rom coms of John Hughes, it’s easy to trace a silhouette of The Breakfast Club here, too.

After flavoring last year’s summer with Life You Choose, Yani Mo, the Lithonia-raised progenitor of a genre she calls “Country Queer Soul Music,” is back with another slice of refreshment for the sweltering solstice. It’s a grounded-in-subtle-wonders love song. Lyrically, she crafts a mixture of winking fondness and playful bravado into an ode to the quirks that make someone uniquely captivating — using food to get there, ala Prince’s “Starfish and Coffee.”

On the music scene for a decade, Yani Mo cites some of her biggest inspirations as Toni Morrison, J. Dilla, and TLC, specifically Lisa “Left Eye” Lopez. In August last year, she told Atlanta magazine that “‘Rap poetry’ didn’t stick, so I threw that away. I thought, is it trap soul? I just wanted something that was mine, that I could say I created, that felt like home.”

In 1987, the sadly short-lived Follow For Now was less an example of a bunch of talented musicians coming together as it was a fiery fusion of red-hot rockstar magma — flowing from a volcanic eruption of rap, metal and soul. They were punky and, boy, were they also funky. Rolling Stone gave their debut (and tragically only) album a rave, declaring that “the black-rock revolution is at hand, and FFN is helping to lead the charge.”

When they hooked up with producer Brendan O’Brien (of Pearl Jam/Red Hot Chili Peppers/Rage Against the Machine fame), and Chrysalis Records signed them in 1991, their ascent into mainstream breakout status seemed all but guaranteed. But unfortunately, it sounds like the studio wasn’t ready to contend with what gave them their fire in the first place. It came out slicker and more boxed in than the band’s fans — or the band — may have wanted.

They broke up three years later, in 1994, setting off a sequence of “what if” scenarios. What if the studio had just let Enrique play the drums in his usual off-kilter style? What if they’d had free license to stay rougher around the edges? But the industry was not in that place.

As Harris told the Baltimore Sun in 1991, “It seems like radio and MTV sometimes sell the public short. None of my friends who really like heavy metal have just heavy metal records in their record collection. They have all different kinds of things. It’s not a strange thing to have Sly Stone and Black Sabbath and Cream and Funkadelic in the same record collection. That’s sort of where we’re coming from.”

Although Harris went on to make his home base Los Angeles, his Atlanta connection lives on in his superstar daughter (with singer/former Arrested Development member Dionne Farris), Atlanta Soundtrack favorite Baby Tate. “Holy Moses” is our Vintage Track of the Week.