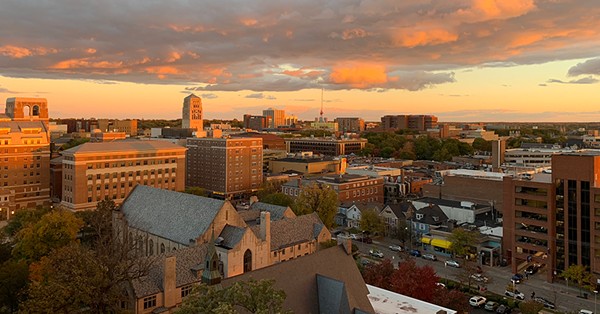 Michigan cities are among those working to curb the devastating impacts of climate change, by reducing their carbon footprints and expanding resiliency and mitigation efforts.

The most recent Intergovernmental Panel on Climate Change report focused on the ways the world can reduce emissions today. The authors have pointed to the Race to Zero initiative, an effort of more than 1,000 cities around the world to achieve net-zero emissions by 2050 at the latest.

Christopher Taylor, mayor of Ann Arbor, said his city is one of them, and is committed to achieving community-wide carbon-neutrality by 2030.

“We know that we in Ann Arbor are not going to solve the climate crisis,” Taylor acknowledged. “But we know that we — in alliance with so many other jurisdictions throughout the state, country, and world — that we all have to do our part because none of us will be unaffected.”

Taylor pointed out strategies range from deploying solar energy to building out electric vehicles in city fleets and improving pedestrian and cycling safety. He added as more affordable housing is built, they are also working to make it as efficient as possible.

According to a report last year from ICLEI Local Governments for Sustainability USA, cities and counties need to reduce their greenhouse-gas emissions by 63% by 2030 in order to stay on track for the goals set out in the Paris Climate Agreement.

Angie Fyfe, executive director of ICLEI Local Governments for Sustainability USA, said the number can seem pretty daunting, especially with just eight years left until the end of the decade.

“We then started looking at the pathways to achieve that and realized that we don’t have to invent new technology,” Fyfe observed. “All of the technologies are already here. The policy instruments that need to be put in place, again, already exist and in many communities are already in place. So that was hopeful.”

Taylor added there will be costs associated with climate change whether governments take action or not. If they do not invest now, the costs will come later with the increased severity of storms and rapid changes in weather patterns.

He explained in November, residents of Ann Arbor will have the opportunity to vote for or against a 20-year millage to support climate action programs.

“These are programs like sustainable energy utility, improvements of bicycle and pedestrian infrastructure, electrification support, resilience centers,” Taylor outlined. “Moving towards our zero-waste efforts with expanded recycling and composting.”