A Weekend of Great Eats 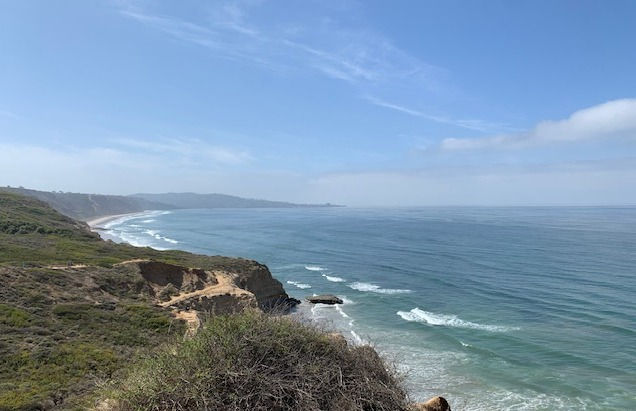 As travel starts to pick back up amid more people being able to get vaccinated, weekend getaways that can be accessed by a quick plane or car ride are becoming more and more popular. Looking for an easy vacation that also happens to be one of our favorite spots, my boyfriend and I recently headed to San Diego. We were taking a few days off and celebrating our third anniversary (it was also the site of our first anniversary as well). Each time I have visited San Diego, the experience has been fantastic but all different (depending on where I stay, who I meet up with, etc.). One thing that always remains the same is the delicious grub. We are big foodies who love to read through countless menus to pick out the ultimate spots to go to, and this might have been the best combination of restaurants yet. Here’s a breakdown of where we went plus a guide to some fun things to do in the city.

We started out with a hike at Torrey Pines. If you haven’t been there, it’s a 2,000 acre state nature reserve and remains one of the wildest stretches of land on the Southern California coast. There are many trails to choose from with cliffs that overlook the beautiful beach below. Truly stunning and a great way to get outside and get some exercise! We did the Beach Trail and Guy Fleming Trail. Next, it was time for some coffee since I hadn’t had any yet that morning (Ah!). One of the things I love to do in a new place is check out local coffee shops and try interesting drinks. We ended up at Bird Rock Coffee Roasters nearby which has other locations throughout the SD area. I had an iced Honey B Latte that is one of their specialities. It’s a mixture of honey, cinnamon and their Monkey Bite Espresso. My boyfriend who is not a coffee drinker got a pomegranate green tea. Both were great, and I also got a jalapeño galette for a snack since we weren’t planning to eat until dinnertime. It was a flaky pastry covered in sesame seeds and filled with cheese.

The friends that we were staying with in the San Diego State area invited us out to dinner with some other of their friends that were in town visiting. It was so nice to get out and enjoy a meal together! Our buddy Adrianne had been to Piacere Mio before at their location in South Park and told us it was super authentically Italian and intimate. It certainly did not disappoint and kicked off night one of our amazing dinners in San Diego! For an appetizer, the two of us shared Melazane Saporita or baked eggplant with mozzarella, ricotta cheese and tomato sauce. For a main meal, I got the homemade tagliatelle pasta with chicken, bell peppers and kalamata olives in a saffron cream sauce (so good that I finished the leftovers when we got back) while the bf had lamb shank osso-buco with veggies, red wine, tomato and demi glacé sauce served with a creamy risotto. Others at the table got chicken piccata and two make-your-own pasta dishes — one with bolognese sauce and the other with nuziale, a mixture of pesto and tomato sauce. I’d be remiss too not to mention the fresh bread and oil that came with the order. Scrumptious!

The next morning, we headed to Pacific Beach. I’m a big beach girl and grew up in New Jersey going down the shore every summer, so getting some time in the sun and sand is always important to me. Afterwards, we grabbed a later brunch at Breakfast Republic. There are multiple locations throughout the city, but the one we went to was right off the boardwalk and just blocks from where we parked. Keep in mind, we had narrowed down our brunch choices from more than five options to this one and were very excited for what was in store! I had been to Breakfast Republic with girlfriends on a previous trip but was trying mostly new menu items this time. I started off with a spicy Bloody Mary that really hit the spot while my boyfriend got a French Toast On The Rocks which was just as good it sounds. We then shared a turkey meatloaf hash with pesto sauce topped with fried egg and served with an English muffin; the breakfast bacon mac ‘n’ cheese (also topped with fried egg); and the French Toast Sampler. You get to select three of their toasts for that, and we chose s’mores, banana split and Mr. Presley, a play on Elvis Presley’s favorite sandwich with bacon and peanut butter. Everything was delicious, and we had more than enough leftovers that we ended up finishing on Monday for lunch before the airport. We also tried the guava mimosa which was super refreshing.

After that big of a meal, we weren’t planning on a large meal for dinner but were happily roped into meeting up with our friends who were over their buddies’ house. This trip was full of meeting new people and making new friends, something I have sorely missed during the pandemic! They had already picked up takeout from Lucha Libre Taco Shop, another staple in the area. The tortilla chips were hard not to snack on when paired with the fresh cucumber salsa and guacamole. I also sampled some chicken tacos while my boyfriend had a seafood burrito, and others had a mixture of other plates.

In the morning, we made breakfast for our hosts, a savory oatmeal dish built from items from their fridge! It ended up being super good, with the hosts eating the leftovers for dinner. We used steel cut oats flavored with artichoke, sun dried tomatoes and fig goat cheese and topped with a spiced Greek yogurt, hummus, olive tapenade, a fried egg and cracker crumble. We then met one of my best friends from college at Liberty Station, the home of San Diego’s old Naval Training Center. It’s now home to an array of eateries, boutiques and even a public market which i’m hoping to do a full story on in the future since we didn’t get to sample it this time. We did however grab a drink at Moniker General, a super cool combination clothing and home goods store, bar and coffee shop. I got a drink of the month featuring coffee and mint while my friend got iced tea and my boyfriend had a coconut cream white tea.

Now comes our actual anniversary dinner and the last night of our trip. We dressed up and made our way over to Juniper and Ivy on the northern edge of Little Italy. We are big fans of Richard Blais who was the founding chef of the restaurant, so it’s been on our list of places to go for a bit. Every single dish was more delicious than the next, and there wasn’t one thing we didn’t like! We started out with Pan’s Absinthe and Berry the Hatchet cocktails followed by English pea hummus, a buttermilk biscuit with strawberry jam, sugar snap peas, beets and burrata salad with frozen strawberry vinaigrette, carrot tagliatelle and a cast iron quinoa bowl. Dessert was an amazing strawberry chocolate yodel. We shared everything except our entrees. It’s hard to pick one, but my favorite dish may have been the peas tossed in house ricotta with a fresno buttermilk dressing.

And so ended the best few days away with absolutely fabulous food. Already planning our next trip!