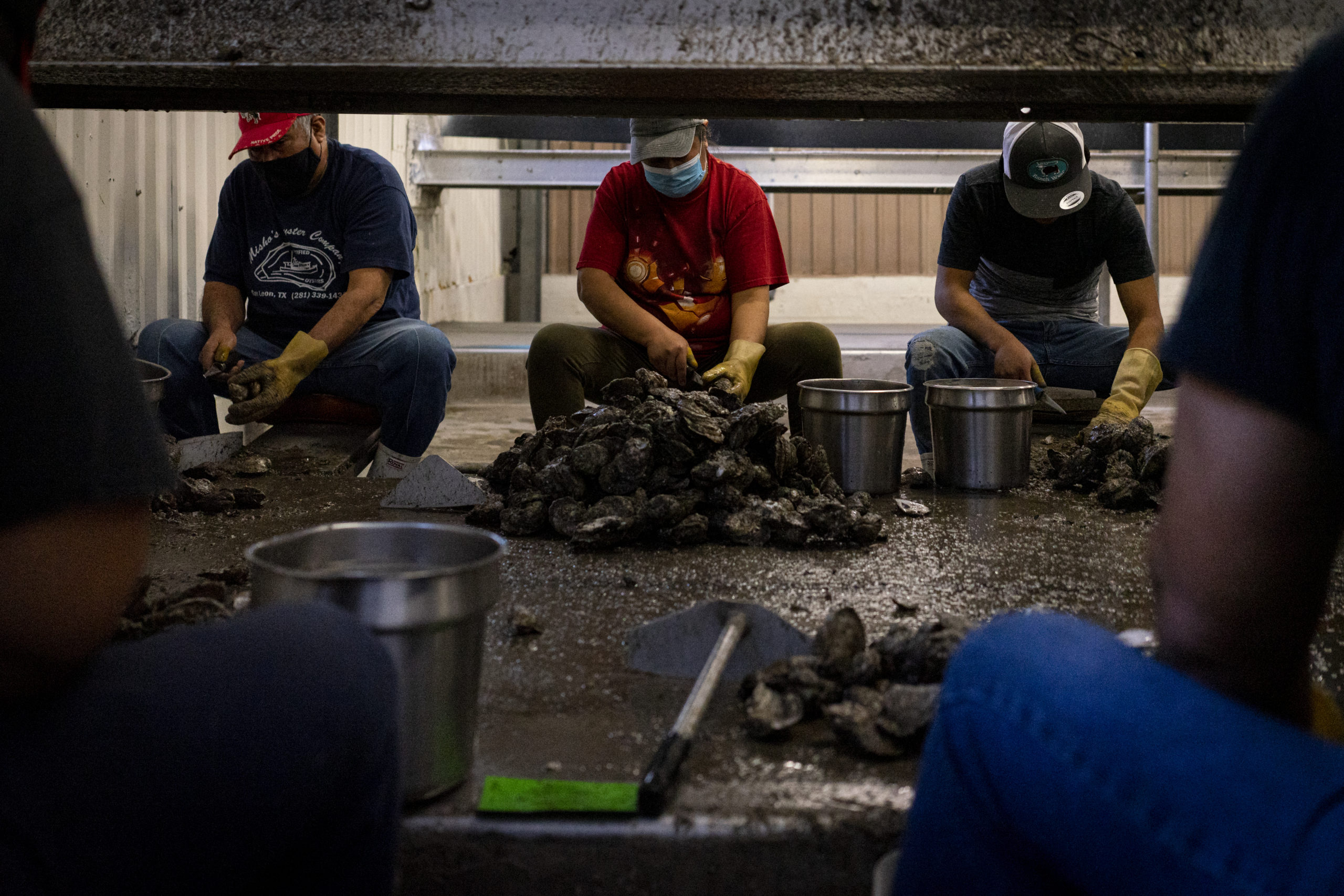 On Thursday before dawn, about 50 people from oyster fishing families piled into charter buses in Galveston, Port Lavaca, and Seadrift, then drove to the headquarters of the Texas Parks and Wildlife Department in Austin to protest at a meeting of the agency’s commissioners. There, they held signs and chanted in English and Spanish: “Open the bays!,” “Justicia!,” and “We want to work!”

The Parks and Wildlife Commission was set to vote on prohibiting oyster harvesting in a chunk  of Ayres, Carlos, and Mesquite Bays near the Gulf Coast town of Rockport, making the area a wildlife sanctuary. After listening to hours of contentious public testimony for and against the proposal, the commissioners ultimately postponed their vote. Chairman Arch “Beaver” Aplin, who’s also the CEO of Buc-ee’s, called for a task force including both conservationists and industry representatives to further study the issue.

“This is not kicking the can down the road,” Alpin said. “We need to get it right.”

Alpin wants the Commission to reach a decision before the next oyster harvest season begins in November.

Johny Jurisich, a fourth-generation commercial fisher, said that while the postponement was “a victory in one sense,” his industry still desperately needed help. He’s tired of fighting but proud of the oyster fishers who showed up to the meeting, and he said the community would continue to organize and protest.

Texas’ Gulf Coast is home to some of the world’s last wild oyster reefs, and these ecosystems—along with the commercial fishers who depend on them—have been ailing for years. Hurricanes Ike and Harvey both damaged the reefs, but scientists and conservationists say overharvesting also plays a big role. In response, Parks and Wildlife officials have imposed more regulations, culminating in closing nearly all the state’s bays to commercial fishing boats before the 2022 oyster season was even halfway over.

“We’ve had ups and downs, but nothing like this,” said Mauricio Blanco, who’s been catching oysters and shrimp in Texas waters for 35 years.

After fleeing war in El Salvador and coming to the United States alone at age 17, Blanco found work as a deckhand. In the years since, he’s built a successful shrimping and oystering business with a fleet of 10 boats and 30 employees. Right now, those employees are doing odd jobs around Blanco’s family ranch to stay busy, but that stopgap solution can’t last. “The bills don’t stop,” he said.

Blanco, Jurisich, and others are protesting not just this latest proposal but the whole oyster reef management system the Parks and Wildlife Department has created, which they say threatens the livelihoods of about 2,000 families.

During the marathon meeting, however, conservationists and scientists pointed out that the reefs themselves also need help. “They serve our land, our wildlife, and our people in myriad ways,” said Amanda Fuller, director of the National Wildlife Federation’s Texas Coast and Water program.

Oyster reefs are increasingly rare ecosystems that serve as crucial habitat for fish and many other marine species. Importantly for Texas, which has a coast littered with polluting industrial facilities, oysters filter water as they feed, improving the water quality around them. Reefs also blunt the force of hurricanes, Fuller explained, and help prevent the coastline from eroding—an urgent concern as climate change raises sea levels and fuels increasingly powerful storms.

At the same time, oyster fishing families have reason to fear the loss of an industry that’s historically provided a pathway to the middle class. A young woman from Calhoun County named Veronica (whose last name was hard to hear during the meeting) spoke on behalf of her late father.

“My father has oystered cold winters and shrimped hot summers to give his four children a college education,” she said, adding that today many younger fishers fear they won’t be able to do the same for their children.

In fact, one 13-year-old, also the child of a commercial oyster fisher, skipped school to attend the meeting. “Since this is affecting us real bad, I’m here,” he said.

Many conservationists and scientists did express sympathy for these families. Fuller suggested that the state should get creative, employing fishers to help restore oyster reefs or work in oyster farming.

Ultimately, the Parks and Wildlife Commission’s decision may not have been influenced so much by public testimony as by the threat of lawsuits.

Jennifer Richards, a lawyer with Texas RioGrande Legal Aid, said that the way the Parks and Wildlife Department hastily drew up its proposal was illegal. State law requires the agency to consider the economic consequences for rural communities, and Richards doesn’t think officials fully studied the economic impact of closing the bays. “As you have heard multiple times today, there will be such adverse impacts,” she said.

Richards also pointed out that the agency has not explained the proposal in Spanish, the primary language of most commercial oyster fishers, either at public hearings or in writing—which she says amounts to discrimination based on national origin. (The EPA recently investigated the Texas Council on Environmental Quality for the same language barrier issues.)

Terrence Courtney, director of cooperative development with the Federation of Southern Cooperatives, who’s helping a group of independent oyster fishers form a collective business, put a finer point on things. “This process itself has indeed reeked of racism,” Courtney said. “The words and the dignity of mostly Latino fishermen have not been respected.”

The meeting went on so long that most of the oyster fishers had gone home when the commission decided to postpone its decision. In the meantime, the three bays under discussion are temporarily closed anyway, and the current oyster harvest season is functionally over. The commission meets again at the end of May.