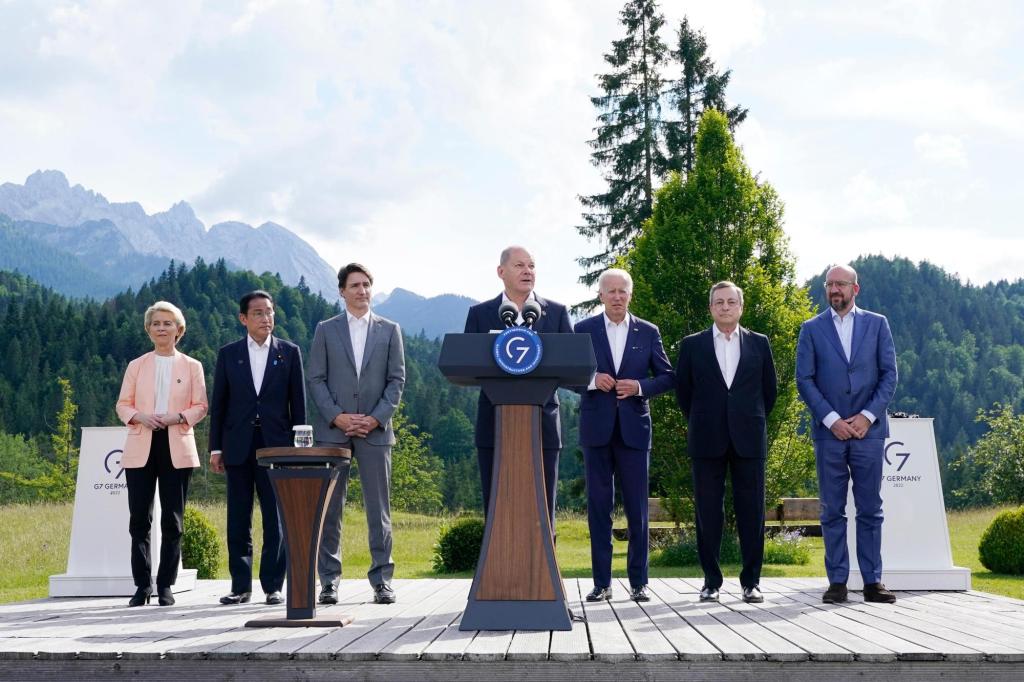 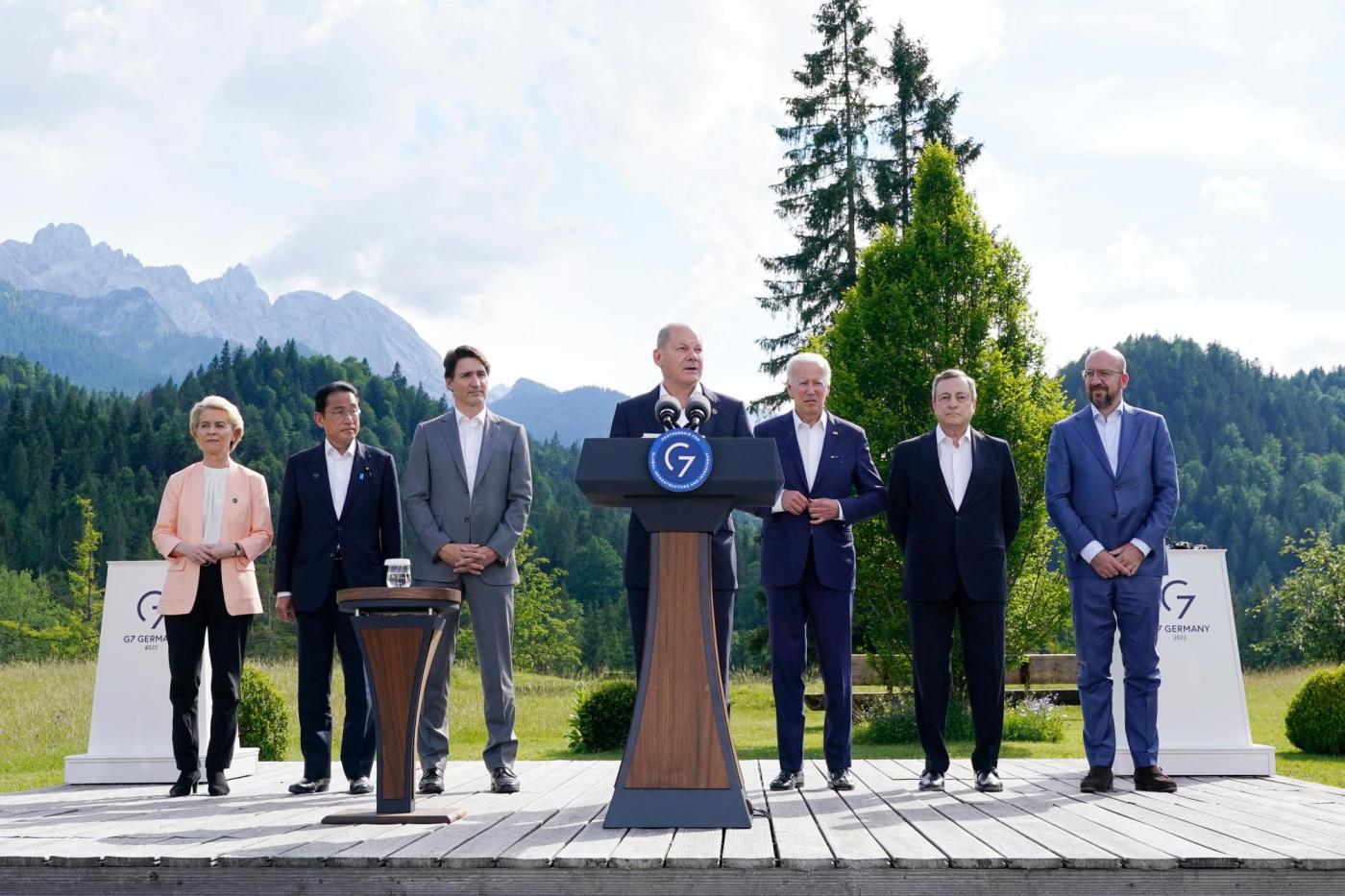 ELMAU, Germany (AP) — Ukrainian President Volodymyr Zelenskyy on Monday underscored the urgency of helping his country’s military improve its position against Russia in the coming months during a video meeting with leading economic powers, who in turn pledged to support Ukraine “for as long as it takes.”

Zelenskyy addressed the delicacy of the moment for Ukraine in its war with Russia to the Group of Seven summit, as the leaders of the major economies prepared to unveil plans to pursue a price cap on Russian oil, raise tariffs on Russian goods and impose other new sanctions.

In addition, the U.S. was preparing to announce the purchase of an advanced surface-to-air missile system for Kyiv to help Ukraine fight back against Vladimir Putin’s aggression, a day after Russian missiles hit the Ukrainian capital of Kyiv for the first time in weeks and as its military was continued a full-on assault on the last remaining Ukrainian redoubt in the Luhansk region.

The new aid and efforts by the G-7 leaders to punish Moscow come as Zelenskyy has openly worried that the West has become fatigued by the cost of a war that is contributing to soaring energy costs and price hikes on essential goods around the globe. The Ukrainian leader discussed his strategy for the course of the war, which has transformed into a bloody artillery battle in the country’s west and east.

U.S. national security adviser Jake Sullivan said Zelenskyy’s top request was for further air defense systems, followed by economic support to assist his government in meeting its financial obligations. Sullivan said most of the conversation was “about the way forward and how President Zelenskyy sees the course of the war.” Zelenskyy also briefed the G—7 leaders on how his administration is using the assistance he’s received to date ”to maximize Ukraine’s capacity both to resist Russian advances, and to pursue counter attacks where possible,” Sullivan said.

Sullivan added that the Ukrainian leader was “very much focused on trying to ensure that Ukraine is in as advantageous a position on the battlefield as possible” in coming months because “he believes that a grinding conflict is not in the interest of the Ukrainian people.”

Zelenskyy also told the leaders that now is not a time for negotiation with Russia because he needs to be in stronger position first, according to a senior French diplomat. The Ukrainian leader said “he will negotiate when he will be in a position to do so,” said the diplomat, who speaking under condition of anonymity in line with the French presidency’s customary practices.

“His goal is to end the war as quickly as possible and to get out of it in the best possible position, so that he can negotiate from a position of strength,” the diplomat said, adding that Zelenskyy told the summit leaders that he needs economic, financial and military support.

After hearing from Zelenskyy, the leaders pledged in a statement to support Ukraine “for as long as it takes.” They underlined their “unwavering commitment to support the government and people of Ukraine” in the battle for their country’s sovereignty and territorial integrity.

They said it is up to Ukraine to decide on a future peace settlement.

Leaders were finalizing the deal to seek a price cap during their three-day G-7 summit in the German Alps. The details of how a price cap would work, as well as its impact on the Russian economy, were to be resolved by G-7 finance ministers, according to a senior administration official who spoke on the condition of anonymity to preview announcements from the summit.

Zelenskyy did not raise the issue of price caps, Sullivan said, but called on G-7 countries to work to stem Russian energy profits.

Some market analysts have doubts about how effective a price cap on Russian oil would be, as enforcement by the G-7 would likely depend on cooperation from India and China.

“It is questionable whether countries like India and China will agree to cease purchasing Russian oil, especially as it is trading at a significant discount on the global market price,” said Carsten Fritsch, a commodities analyst at Commerzbank.

The largest democratic economies will also commit to raising tariffs on Russian imports to their countries, with the U.S. announcing new tariffs on 570 categories of goods, as well as use of sanctions to target Russia’s defense supply chains that support its effort to rearm during the war.

Biden is expected to soon announce the U.S. is purchasing NASAMS, a Norwegian-developed anti-aircraft system, to provide medium- to long-range defense, according to a person familiar with the matter, who spoke on the condition of anonymity. NASAMS is the same system used by the U.S. to protect the sensitive airspace around the White House and U.S. Capitol in Washington.

Additional aid includes more ammunition for Ukrainian artillery, as well as counter-battery radars, to support its efforts against the Russian assault in the Donbas, the person said. Biden is also announcing a $7.5 billion commitment to help Ukraine’s government meet its expenses, as part of a drawdown of the $40 billion military and economic aid package he signed into law last month.

The G-7 leaders opened Monday’s session with a focus on Ukraine. They were later joined by the leaders of five democratic emerging economies — India, Indonesia, South Africa, Senegal and Argentina — for a discussion of climate change, energy and other issues.

German Chancellor Olaf Scholz, the summit host, said the G-7 countries’ policies on Ukraine are “very much aligned,” and that they see the need to be both tough and cautious.

Scholz said after meeting with Canadian Prime Minister Justin Trudeau on Monday that “we are taking tough decisions, that we are also cautious, that we will help … Ukraine as much as possible but that we also avoid that there will be a big conflict between Russia and NATO.”

Britain’s Boris Johnson said that under the circumstances the G-7 has to “continue to help the Ukrainians to rebuild their economy, to get their grain out, to export their grain, and, of course, we have to help them to protect themselves. And that’s what we’re going to continue to do.”

In Brussels, NATO secretary general Jens Stoltenberg said Monday that the military alliance will increase the size of its rapid reaction forces nearly eightfold to 300,000 troops as part of its response to an “era of strategic competition.” The NATO response force currently has about 40,000 soldiers which can deploy quickly when needed.

Stoltenberg made the remarks ahead of a NATO summit later this week in Madrid when the organization’s 30 allies are expected to also agree on further support for Ukraine in its war against Russia.

Scholz said last week that he wants the G-7 to discuss the outlines of a “Marshall plan for Ukraine,” referring to the U.S.-sponsored plan that helped revive European economies after World War II.

With the war still in progress and destruction mounting by the day, it’s unlikely to be a detailed plan at this stage. Scholz has said “rebuilding Ukraine will be a task for generations.”

A senior U.S. administration official, speaking on condition of anonymity to discuss private conversations between the G-7 leaders, said the U.S. and Europe are aligned in their aims for a negotiated end to the conflict, even if their roles sometimes appear different.

Scholz and French President Emmanuel Macron have tried to facilitate that through active conversations with Putin and Zelenskyy, while also supplying weapons to Ukraine. The U.S. has largely cut off significant talks with Russia and aims to bolster Ukraine’s battlefield capacity as much as possible so that its eventual position at the negotiating table is stronger.

Follow AP’s coverage of the Russia-Ukraine war at https://apnews.com/hub/russia-ukraine