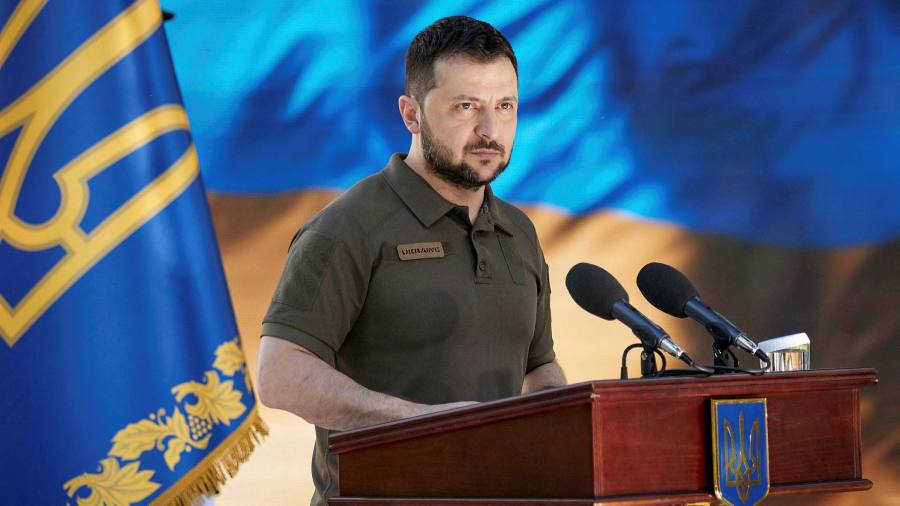 Ukraine’s president Volodymyr Zelensky has hailed the survival of his country, one hundred days into a Russian invasion that has devastated the nation, claimed thousands of lives and rocked global food supplies.

When Russia launched its full-scale invasion of Ukraine on February 24, western leaders expected the capital to fall within days. More than three months into the invasion, Russia occupies 20 per cent of Ukrainian territory — up from seven per cent previously — and while millions of Ukrainians have become refugees, Zelensky remains in control of the capital.

“The president is here . . . the Armed Forces of Ukraine are here. And most importantly our people are here,” Zelensky said in an Instagram video from outside his office as top aides stood by his side. “We have been defending Ukraine for 100 days. Victory is ours,” he added. The video is a deliberate echo of the one posted by Zelensky after the first day of the war.

His bravado on Friday in part reflects fresh supplies of heavier and longer range weaponry from the US and European countries. Ukraine is now braced for a grinding and drawn out war with its northern neighbour’s larger army.

The conflict between two countries which are large agricultural exporters has roiled global grain and vegetable oil markets. Ukraine accounts for about 10 per cent of the international wheat trade, and the Russian naval blockade of Ukraine’s Black Sea ports has virtually halted grain exports.

Macky Sall, Senegal’s president and head of the African Union, met Russian president Vladimir Putin on Friday to discuss the impact of food shortages caused by the invasion of Ukraine. In a video conference with EU leaders this week, Sall complained that the west’s sanctions on Moscow made it almost impossible for African countries to purchase grain from Russia.

Kremlin spokesman Dmitry Peskov said before the meeting that Putin would give Sall a “detailed explanation of its vision of the situation with Ukrainian grain” and “explain again what’s going on there, who mined the ports, what is necessary to do to allow the grain flow to resume”. Peskov insisted again that Russia was not blocking the ports.

UN officials on Friday warned that a protracted war could exacerbate the global food crisis. Amin Awad, a UN crisis co-ordinator, on Friday said that more than 15.7mn people in Ukraine were in urgent need of aid and that the conflict risked triggering starvation globally. “One hundred days of war, 100 days of suffering, devastation, destruction on a massive scale . . . the lives of millions have been shattered,” he said, according to wire reports. “Failure to open those ports will result in famine, destabilisation and mass migration around the world.”

The Office of the UN High Commissioner for Human Rights on Friday said it had so far recorded 4,183 civilian deaths but warned that “actual figures are considerably higher”. This figure does not include combatant casualties. Zelensky has in recent days said that his country is losing up to 100 soldiers per day, with more than 400 wounded on a daily basis. His army estimates more than 30,000 Russian soldiers have been killed, a figure that Russian officials have not confirmed and which could not be independently verified.

After failing to swiftly capture Ukraine’s capital city Kyiv, Russian forces have concentrated on gaining more ground in the eastern Donbas region as well as southern coastal territory forming a land bridge to Crimea, the peninsula it occupied in 2014.

Russian troops this week came closer to capturing Sievierdonetsk, the provincial capital of Luhansk region which is mostly Russian occupied. It is one of two provinces that Putin, in justifying the war, pledged to “liberate”.