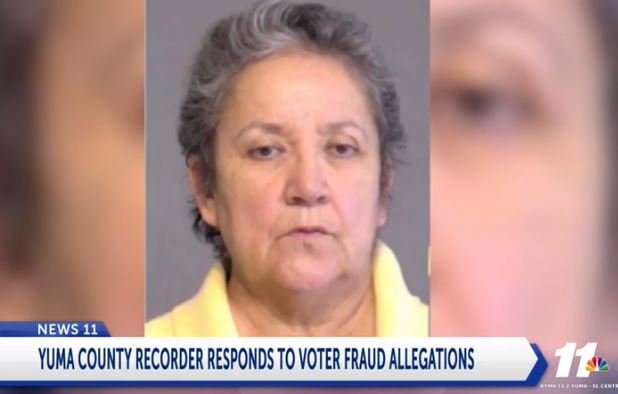 Gadsden Elementary School Board Member and former Mayor of San Luis Guillermina Fuentes has pleaded guilty to her role in a sophisticated ballot trafficking ring that stole the 2020 Presidential election from President Trump in Arizona.

According to Arizona State Senate candidate Gary Snyder, her next sentencing hearing is on June 30th at 1:30 pm.

The Gateway Pundit reported that Guillermina Fuentes was set to plead guilty today for illegally harvesting ballots for Democrats in Arizona.

A second accomplice, Alma Yadira Juarez, also pleaded guilty for her role in a local ballot trafficking operation during the 2020 primary election long after this evidence was delivered to law enforcement. Juarez, who was indicted in December 2020, admitted to authorities that Fuentes gave her the ballots to stuff into ballot boxes. Fuentes was later indicted for multiple felonies.

David Lara and Gary Snyder busted this ballot trafficking ring — which was further investigated and exposed by True the Vote and “2000 Mules” — using undercover cameras in August 2020. The Gateway Pundit reported that Mark Brnovich received this evidence before the General election, but he waited for months and certified a rigged election.

Hopefully, she gave more information about her accomplices. As The Gateway Pundit reported, search warrants were recently served for Gloria Torres, another member of the Gadsden Elementary School Board, at the Comité De Bien Estar nonprofit in connection to this criminal organization.

An Arizona woman accused of illegally collecting early ballots in the 2020 primary election pleaded guilty Thursday in an agreement with state prosecutors that saw the more serious forgery and conspiracy charges dismissed and limited any potential for a lengthy prison sentence.

Guillermina Fuentes, 66, could get probation for running what Arizona attorney general’s office investigators said was a sophisticated operation using her status as a well-known Democratic operative in the border city of San Luis to persuade voters to let her gather and in some cases fill out their ballots.

Prosecutors were apparently unable to prove the most serious charges, dropping three felony counts alleging that Fuentes filled out one voter’s ballot and forged signatures on some of the four ballots she illegally returned for people who were not family members.

Fuentes received the lowest charge possible. It was a “slap on the wrist.”

“She left laughing her a** off,” said Gary Snyder.

RINO Attorney General Mark Brnovich did not even show up to the hearing, despite being in Yuma this morning. Instead, he was posturing at the border and interviewing with Fox News’ Sandra Smith, who claims that “2000 Mules” has been debunked.

TUNE IN: I’m about to join @AmericaRpts with @johnrobertsFox and @SandraSmithFox to talk about my visit to the U.S.-Mexico border in Yuma, Arizona. https://t.co/MOJT73iVsI pic.twitter.com/s0UbLoTJlt

It looks like Mark Brnovich dropped the ball again. He has always been weak on election integrity.

Contact Mark Brnovich to demand real action against these criminals.