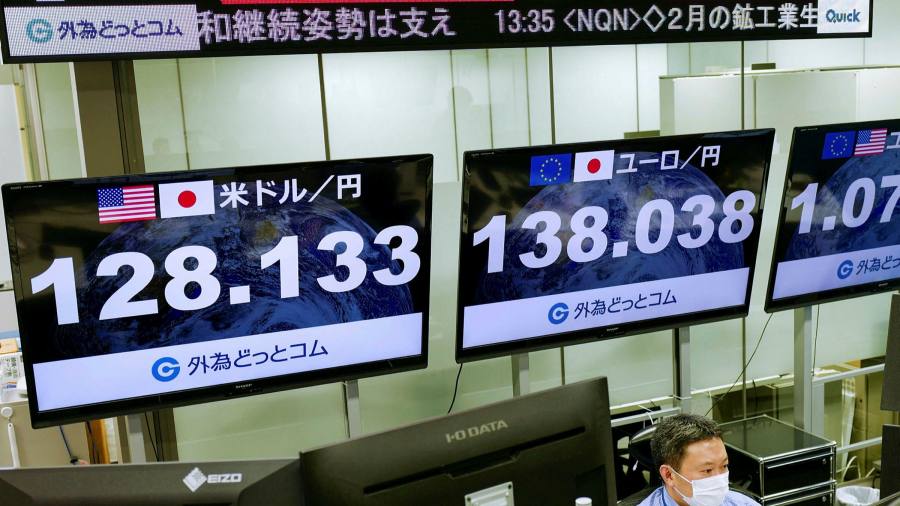 The yen extended its unbroken slide into a 13th day on Tuesday, moving past ¥128 against the dollar and ratcheting up the stakes at next week’s Bank of Japan policy meeting as officials weigh the continuation of the country’s ultra-loose monetary stance.

The sharp slump in the yen to a new 20-year low came as a Tokyo Shoko Research survey of nearly 5,400 companies across the spectrum of Japanese industry found that approximately 40 per cent said that yen weakness had a “negative impact” on their business. Just 29 per cent had taken that view in December when the yen was at ¥113 against the dollar.

The highest proportion of those hurt by the stronger yen was in the clothing and textile industries, followed by food and furniture equipment manufacturers. Tadashi Yanai, chief executive of Asia’s largest clothing retailer Fast Retailing said in a press conference last week that the weak yen had “no merit whatsoever”, arguing it only brought disadvantages to the Japanese economy.

Foreign exchange analysts said that with the yen at ¥128.25 against the dollar it had become “inevitable” that speculators would now test the ¥130 line in the coming days, particularly because the market appeared to be taking little notice of remarks from Japanese authorities designed to calm the yen’s descent.

The market reaction to recent comments from the BoJ and the Ministry of Finance was likely to remain limited as long as US rates continued to march higher and Japan’s ultra loose monetary policy remained in place, said JPMorgan forex strategist Benjamin Shatil.

As the yen fell on Tuesday, Japan’s finance minister Shunichi Suzuki adopted a marginally stronger tone than in previous days, declaring the speed and abruptness of the yen’s move “undesirable”.

While acknowledging the reality that for Japan’s trade-dependent economy there were positive aspects to a weaker currency, he said that “there are strong negative aspects in the current economic climate”.

Echoing previous comments, Suzuki added that the government was watching forex moves with a strong sense of vigilance. His remarks came ahead of his departure later on Tuesday to the US where both he and the BoJ governor Haruhiko Kuroda are attending G7 and G20 meetings. 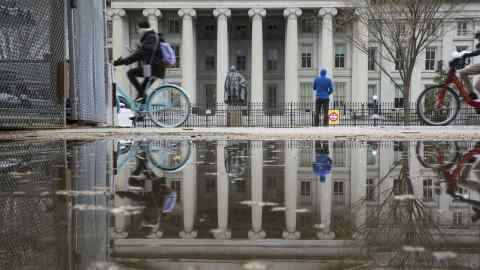 Forex traders in Tokyo said that while there was a possibility that bilateral sessions between the Japanese and US sides could produce a statement intended to calm markets, it was unlikely to have much effect given that it would not address the fundamental issue that the BoJ’s monetary policy was so clearly dislocated from the normalisation moves elsewhere in the world.

The policy split has widened the gap in yields on Japanese and US government bonds, with those on 10-year US Treasuries now more than 2.6 percentage points higher than those on the equivalent Japanese sovereign bonds.

The yen’s steady losses have made it by far the worst-performing major currency this year in dollar terms. The drop of almost 1 per cent on Tuesday took the yen’s exchange rate to ¥128.15, the lowest level since May 2002.

BoJ officials have so far shown no sign of flinching at the currency’s weakness, publicly welcoming the yen’s fall as a boon for exporters. But analysts believe that the administration of prime minister Fumio Kishida could come under political pressure if the yen weakens past the ¥130 mark and begins to weigh more heavily on Japan’s domestic economy.

Analysts at Citigroup expect the BoJ to maintain its so-called yield curve control policy through to the end of Kuroda’s tenure in April 2023, but have forecast a policy rate rise of 0.1 percentage points in September next year.