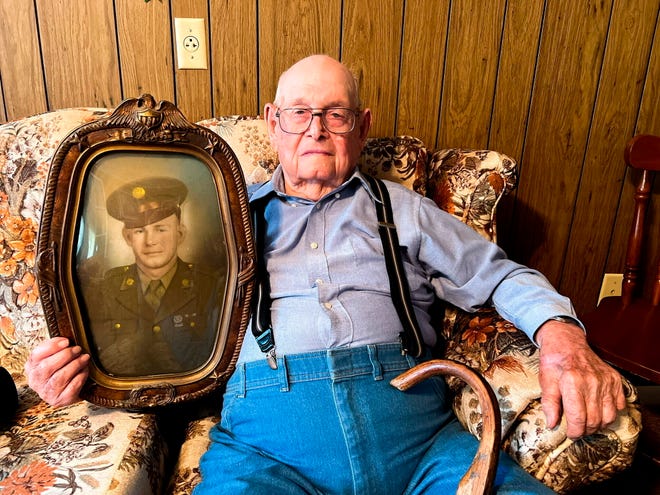 POWERS, Miss. — Burly Register had much to celebrate on Memorial Day.

Family and friends gathered in Powers to recognize his military service and the fact that he marked 100 years old.

Register, born May 30, 1922, is a World War II veteran who served during the war’s Battle of the Bulge in 1944. He grew up in Morton in Scott County. At age 20, he joined the Army as the nation was in the throes of the war. After basic training at Fort McClellan in Alabama, he went to Camp McElroy in Wisconsin and then to England.

“We went from England and crossed the English Channel to Le Havre, France, drove from there to Luxembourg, and that’s where we joined combat,” Register recalled. “That was the Battle of the Bulge.”

More:Miss. woman hopes father’s legacy will ‘continue to inspire others for generations’

Register had missed fighting in the D-Day invasion in June 1944, although he has friends who were deployed to storm the beaches at Normandy, France, the greatest military assault in history. Register did serve through the Battle of the Bulge, also known as Adolf Hitler’s last great offensive against the Allies.

There, Register was a truck driver that hauled communication equipment and telephone wire. He had to cross the Sauer River near Bastogne, a key site in the Battle of the Bulge, every few days for a couple of weeks, but the Germans would blow out the bridges, he said.

He recalled a time near the end of the war when he and one other solder were driving when 12 German soldiers approached their vehicle.

There were only two guns in the truck.

“With the 12 of them, there was no telling what kind of automatic guns they had — we wouldn’t have had a chance,” Register said. “There wasn’t nothing to do but drive up there and stop.”

Then he saw something that stunned him.

“(They) walked out in front of the truck, but they had their hands over their heads — they were surrendering — but I didn’t know what they had under their coats,” Register said. “There was nothing I could do but stop.”

Register married his wife Ruby Williams Register while on furlough on Nov. 1, 1943. Less than two years later, he came home from the war just before it ended and was packed onto the ship, the Queen Mary, with more than 15,000 other soldiers headed home.

After the war, he moved to Laurel and had three children, Patricia Register on June 2, 1946, and twins Alvin and Alton Register on Feb. 8, 1949.

He went to diesel mechanic school to work on planes and eventually started working at Masonite, retiring from there.

The best part of his life, he said, was having a good marriage and a good family. Ruby Register died in 2017 after 73 years of marriage.