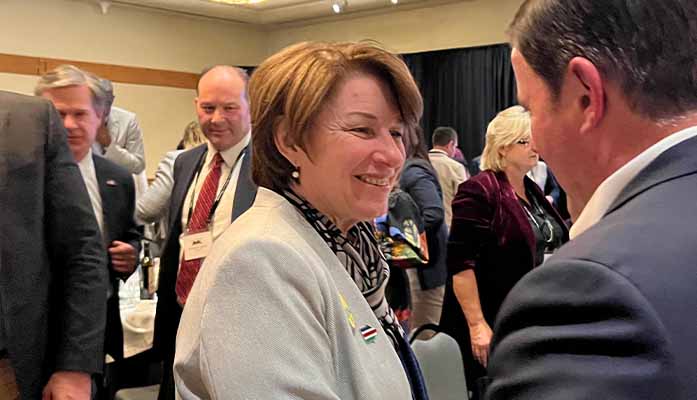 The Washington Post served as the “media partner” at the McCain Institute’s signature annual event, the Sedona Forum, this weekend. The theme of this year’s event was “Strategic Competition.”

The rich and powerful of the United States and world leaders gathered “to have informal, face-to-face discussions about real solutions to the problems facing our world today,” according to the organization.

For the first time, the 2022 Sedona Forum is being held both virtually and in-person, virtual panels started Thursday, April 28.

Friday at the @McCainInstitute‘s #SedonaForum2022, #FBI Director Christopher Wray addressed domestic and international leaders from the public and private sectors about the array of threats facing U.S. national security. pic.twitter.com/P9zkiSg6jq

When an astronaut asks you if you want a lift, you figure if he commanded the space shuttle he can probably land the plane. https://t.co/ZBJyrdWIpC

Senators Mark Kelly and Amy Klobuchar travelled, like other world leaders to the event, in a private plane.

A lot of the folks who will come into Congress as a result of this deeply polarized electorate…they’re not going to be joining the Problem Solvers Caucus. They ARE the problem” —Rick Davis ⁦@McCainInstitute⁩ #2022SedonaForum pic.twitter.com/pbe50x48xa

“We’re thrilled to work with The Washington Post to provide an inside look at the consequential conversations that will take place in Sedona. As world leaders, high-ranking officials, journalists, humanitarians and other newsmakers gather for this one-of-a-kind event, we look forward to fostering discussions that will produce actionable solutions to our world’s most pressing challenges and honor the legacy of Senator John McCain,” said Director of the Sedona Forum, Davis White, in a press release.

Interviewed former President of Ukraine Petro @poroshenko for the #mccain Sedona Forum. The #Ukrainian people fight for us all. https://t.co/TB0wyx6qcr