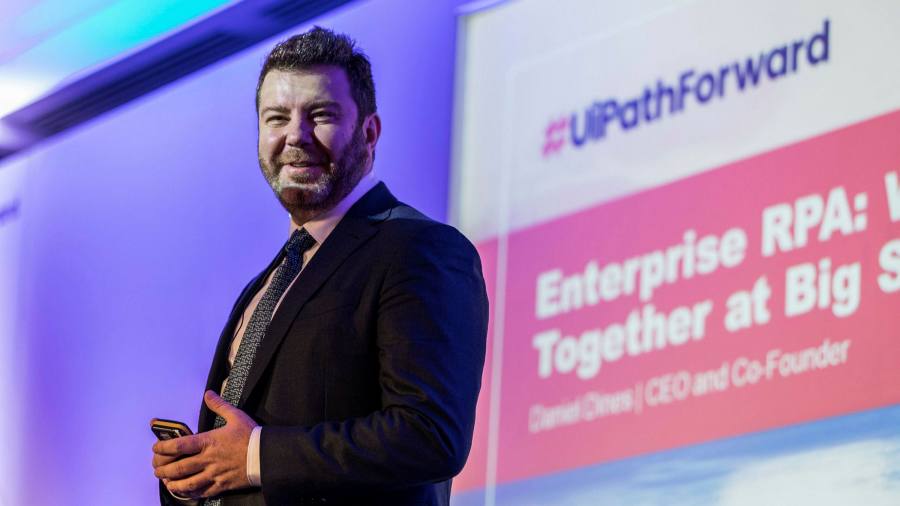 Shares in workplace software company UiPath rose on their Wall Street debut on Wednesday after one of the largest initial public offerings in the sector.

The Romania-founded, New York-based company, a leader in the fast-growing business of task automation, closed its first trading day at $69, up 23 per cent, giving the company a market capitalisation of $35.8bn.

The IPO brought in $530m in new capital, but UiPath settled for a lower initial valuation than in its last funding round two months ago. It sold shares at $56 apiece, higher than the company’s marketed range of $52-$54 but below the $62.28 set in February.

The company said at the time that the February financing valued it at $35bn, a number that likely included options and other forms of stock-based compensation.

“The company has the cash balance, the currency and the right strategy to go win the market,” said Richard Wong, a UiPath board member and partner at the venture capital firm Accel. “The long-term valuation will be sorted out over many quarters to come.”

UiPath had priced its IPO amid signs that investors had curbed their enthusiasm for the fast-growing software as a service sector.

The BVP Nasdaq Emerging Cloud Index has fallen 16 per cent from a peak in mid-February. The index includes Snowflake, the data analytics group whose IPO was the largest-ever in the software sector. Snowflake shares doubled on their debut but are not any higher now.

Some recent public offerings have had tepid receptions, in contrast with blockbuster offerings at the end of last year headlined by Airbnb and DoorDash in December. Compass, the SoftBank-backed real estate brokerage, cut the size of its offering last month.

UiPath sells artificial intelligence-based software that companies use to automate routine tasks such as reading documents and updating databases. This sector, known as robotic process automation, has boomed as companies in fields ranging from healthcare to insurance seek to replace or retrain white collar administrative workers.

Founded in Bucharest in 2005, UiPath spent 10 years developing its technology before raising its first round of venture capital. Its February funding round made it the second-most valuable private venture-backed business software group, behind Stripe.

“We showed our European fellows that they don’t need to sell their companies too early in the journey,” said Daniel Dines, UiPath chief executive. “If they believe in building a big business, it’s actually a good place to start.”

UiPath said it had revenues of $608m for the year ending January 31, an increase of 81 per cent on the previous year. Its net losses narrowed from $520m to $92m.

As part of the offering, public investors also purchased more than $810m in shares from existing backers including Accel and Coatue Management. Accel held the largest stake in UiPath before the IPO, with shares worth about $6bn at the offering price.

Dines will retain more than 88 per cent of the company’s voting power after its public market debut through a dual-class share structure. His stake in the business was worth $6.2bn at the IPO price.*

Morgan Stanley and JPMorgan served as lead underwriters of the deal.

*An earlier version of this article misstated the value of Dines’ stake. The headline has also been corrected to reflect that UiPath is listed on the New York Stock Exchange

#techFT brings you news, comment and analysis on the big companies, technologies and issues shaping this fastest moving of sectors from specialists based around the world. Click here to get #techFT in your inbox.