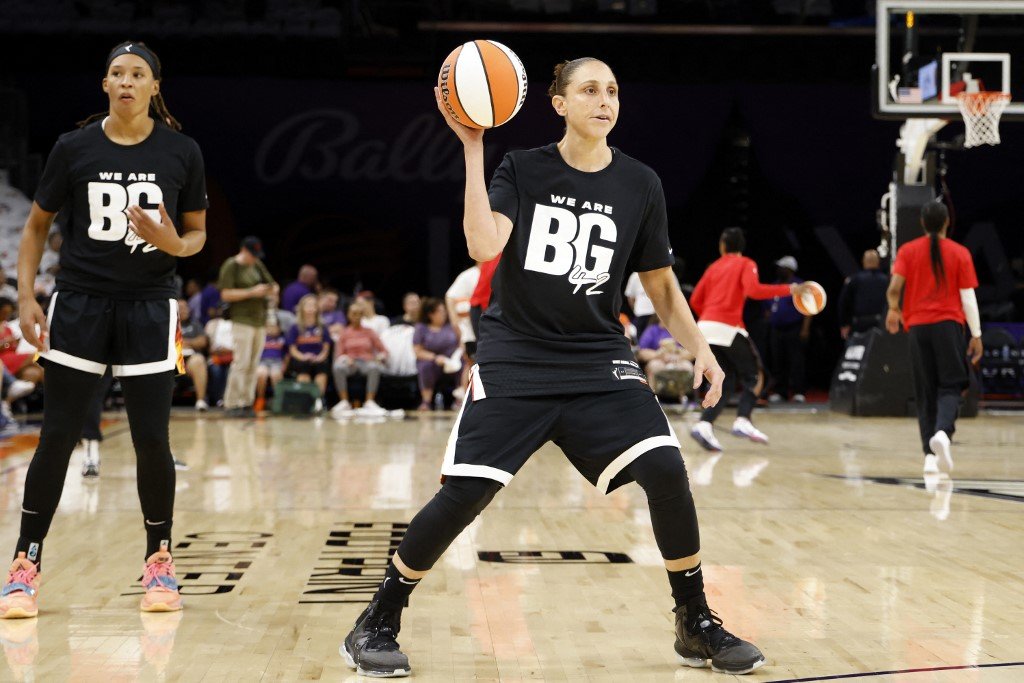 Guard Diana Taurasi #3 of the Phoenix Mercury warms up wearing a shirt to honor teammate Brittney Griner before the game against the Las Vegas Aces at Footprint Center on May 06, 2022 in Phoenix, Arizona. Phoenix Mercury center Brittney Griner has been detained by the Russian government since February. Chris Coduto/Getty Images/AFP

WNBA players and their union leaders stepped up their calls for Brittney Griner’s release from prison in Russia on Saturday, the 100th day of the US basketball star’s detention.

“Right now, on day 100 of BG’s wrongful detainment, we are calling on everyone to use their platforms, no matter the size, to bring attention to her wrongful detainment, to get (Griner’s wife) Cherelle that meeting with President Biden and to get our sister home,” the Women’s National Basketball Players Association (WNBPA) said in a statement.

Griner was detained in February amid soaring tensions over Ukraine.

The two-time Olympic gold medallist and WNBA champion was arrested at Moscow’s airport on February 17 on charges of carrying in her luggage vape cartridges with cannabis oil, which is illegal in Russia.

However, on May 3 the US State Department said it had determined that Russia had “wrongfully detained US citizen Brittney Griner.”

On May 13, Russian state media said Griner’s pre-trial detention had been extended until June 18.

In the immediate aftermath of Griner’s detention, the WNBA had commented little on the case hoping not to inflame the situation.

Since the State Department’s declaration that she was wrongfully detained, however, there have been more vocal calls for her release.

“To athletes, of any age, ability level, team, sport or country: this is OUR teammate,” the WNBPA wrote. “A member of OUR global sports community, we need to stand up and stand together to call for her release.”

Several WNBA and NBA players tweeted about Griner on Saturday.

Griner, 32, was travelling to play club basketball in Russia when she was detained.

Since then, the United States and Russia have exchanged prisoners with Russia, freeing former US Marine Trevor Reed who had been accused of drunkenly fighting with police.

The United States also says Russia has unjustly detained Paul Whelan, a former security official at a vehicle parts company who was sentenced to 16 years in prison on espionage charges.