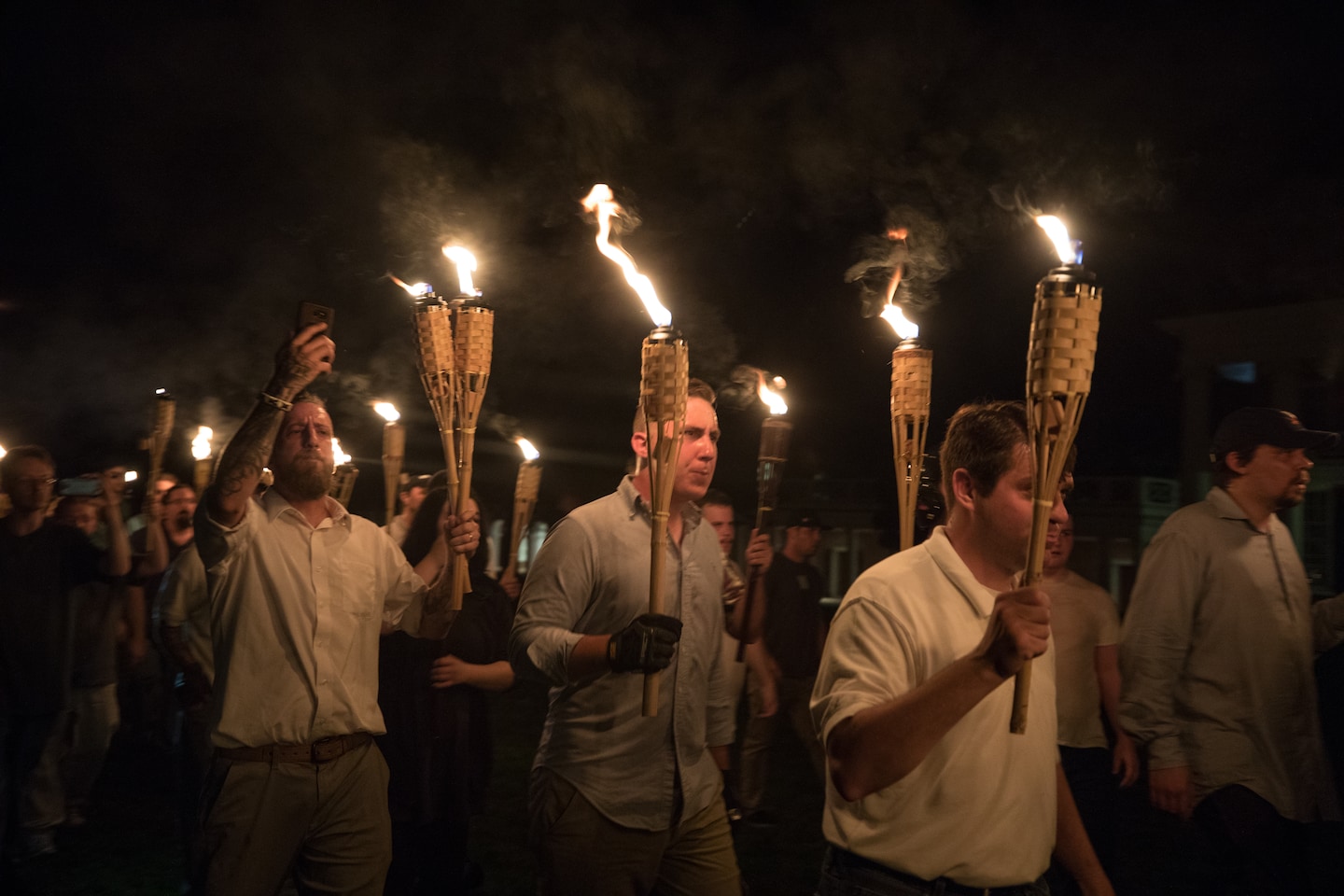 White Christian nationalism can be messy to define, but it’s critical to recognize its three animating impulses: freedom, order and violence — the ideology’s holy trinity. The freedom belongs only to Americans these nationalists see as like them (White men). The order is to be imposed on all those they don’t (everyone else). And righteous violence is to be deployed as necessary to achieve this twisted vision.

Both the racist massacre in Buffalo last weekend and the antiabortion legislation spreading rapidly through the states in anticipation of the overturning of Roe v. Wade next month are linked to white Christian nationalism, despite a pair of glaring paradoxes: The suspect in the Buffalo shooting doesn’t claim to be Christian in a religious sense, and many “pro-life” Christians are pro-death-penalty, pro-guns and pro-police brutality.

It makes sense in context. The ideology’s adherents are committed to instituting an ethno-culture that represents a shrinking minority — a traditionalist Christian social order in which the freedoms of White Christians are privileged. Theirs is a world where race, religion and national belonging have become virtually inseparable and are not necessarily tied to spirituality. And the spread of this kind of thinking is rapid and startling.

Over the last year or so, White Christian nationalism has become intertwined with the “great replacement” theory, which holds that a corrupt elite made up of Jews and Democrats is carrying out a plot to replace “real” Americans by engineering mass immigration from the Third World. Since 2015, that theory has captured the fringes and some in the mainstream on the right, from angry young men bearing tiki torches in Charlottesville; to pundits like Ann Coulter, Charlie Kirk, Matt Walsh and Tucker Carlson; to at least a half-dozen prominent Republican candidates and lawmakers, including Sen. Ron Johnson (Wis.), Reps. Elise Stefanik (N.Y.) and Scott Perry (Pa.), Arizona state Sen. Wendy Rogers, and J.D. Vance, Ohio’s GOP nominee for the Senate.

In citing the “great replacement” in a lengthy document posted online, the Buffalo suspect appears to have justified plans for his murderous assault by articulating what many of his fellow citizens already believe. “If there’s one thing I want you to get from these writings,” the suspect begins, “it’s that White birth rates must change.” Combined with a menacing “invasion” of non-White immigrants, low White fertility rates, he warns, “will ultimately result in the complete racial and cultural replacement” of Whites.

According to a recent survey by the Associated Press-NORC Center for Public Affairs Research, a third of all American adults now embrace the idea that “an effort is underway to replace U.S.-born Americans with immigrants for electoral gains,” even if they wouldn’t shoot up a grocery store in its furtherance.

That “American” implies “Christian” is not an uncommon belief, especially if you’re a White American. In a nationally representative survey we fielded in March, we found that 28 percent of all Whites and half of conservative Whites affirm that “being a Christian is very important to being truly American.” For many White Americans, Christianity is more of an ethnic culture and identity than a set of spiritual beliefs. It means “White people like us.”

In “The Flag and the Cross,” our new book on white Christian nationalism, which we have both been studying for some time, we show that the “holy trinity” embodied in it is anchored in a mythological version of American history that goes something like this: America was founded as a Christian nation; the founders were traditional Christians; the founding documents are biblically based; God has therefore bestowed immense wealth and power on America and given it a mission to spread freedom and religion around the world; but that mission and those blessings are now threatened by the presence of non-Whites, non-Christians and non-native-born people on American soil. Today this story is propagated by a veritable Christian-nationalist industry that includes radio stations, video series, scores of books and entire organizations dedicated to telling White conservative Christians that the nation is their birthright.

For a segment of Christians, the battle over abortion is just one front in a wider war to make America Christian again — by any means necessary. They are not pro-life so much as pro-control. We know this because the Americans who hold the strongest antiabortion stances are not consistently “pro-life.” When we asked a nationally representative sample of White Americans about their political views on issues including abortion, the death penalty, gun control and law enforcement, here’s what we found: Among the White Americans who believe that abortion should be outlawed, more than half think we don’t use the death penalty often enough, 4 out of 5 see “good guys with guns” as the best solution to gun violence, and nearly half support police enforcing order by “any means necessary.” By comparison, among Whites who think abortion should be kept legal, only 17 percent think we should use the death penalty more, 1 in 4 think “good guys with guns” stop bad guys with guns, and less than a quarter support carte blanche for law enforcement.

The majority of those with the strongest antiabortion views also want to impose their vision of a Christian nation on other Americans. We asked the same group of White Americans various questions about America’s relationship to Christianity. Among those who want to outlaw abortion outright, roughly two-thirds believe both that the government should formally declare the United States a Christian nation and that making God’s kingdom more present on Earth involves changing laws to reflect biblical principles. Among those who believe that abortion should remain legal, by contrast, only 7 percent hold either of these views.

It’s important to note that white Christian nationalism is not the same as conservative White evangelicalism. Some evangelicals reject the ideology, and many non-evangelicals and even some non-Christians embrace it. In our book we show that about 20 percent of Americans who believe that the federal government should declare the nation Christian don’t even identify as Christian — a view that aligns with the Buffalo suspect’s view of Christianity. Answering his own question about whether he thought of himself as Christian, he wrote in his online post: “No. I do not ask God for salvation by faith, nor do I confess my sins to him.” He added that “I do however believe in and practice many Christian values.”

When Roe was originally decided in 1973, 85 percent of Americans were White and more than 85 percent were Christian. A half-century later, conservative White Christians are just another minority group, albeit an extremely powerful and well-organized one. Not content with this diminished status, some are no longer content with majority rule, either. They want rule by “we, the people,” which they understand to mean “our kind of people.”

The Supreme Court itself is now an instrument of minority rule by White Christians. Consider: Of the five justices who reportedly voted to strike down Roe, four were nominated by presidents who lost the popular vote, and five of the six conservative justices were confirmed by senators representing a popular minority. The new conservative majority on the court represents a shrinking minority of conservative White Christian Americans. It is a bulwark against the popular will and, increasingly, a battering ram against settled law.

White Christian nationalists want control over the other two branches of government as well. In previous studies, we showed that even before the 2020 election, Christian-nationalist ideology was a leading predictor that White Americans thought we make it too easy to vote. If the goal is control, then the last thing you want is full democratic participation. Rather, you want to raise the bar so that only the “worthy” can have a say. There is nothing new about this. In 1980, Paul Weyrich, a co-founder of the Moral Majority, said the quiet part out loud: “I don’t want everybody to vote.” White Christian nationalism is powerfully related to belief in Trump’s “big lie” about a stolen election, and today, some adherents of white Christian nationalism favor insurrections and bullets over elections and ballots.

In August 2021, we asked Americans what they thought about the future of the country and how much they agreed with various statements related to violence. The patterns we observed were unequivocal. The more that White Americans agree that the federal government should declare the United States a Christian nation, the more they affirm that “true American patriots” may have to resort to physical violence to save the country. Given the connection between Christian nationalism and the desire to completely outlaw abortion, it shouldn’t surprise us that 42 percent of White Americans who support banning abortion also believe that physical violence may be necessary to rescue the country. Less than 6 percent of Whites who want to keep abortion legal support this view.

A surprising and disproportionate number of White conservative Christians are inclined to believe that defending and preserving a White and Christian America will require violence. In the August survey, 27 percent of White evangelicals agreed that “true American patriots may have to resort to physical violence in order to save the country,” roughly double the percentage for other religious groups.

Prominent white Christian nationalists often talk explicitly about the “great replacement” theory, making clear that religious and cultural transformation is their main concern. Charlie Kirk, former director of the Falkirk Center at Liberty University and a prominent Christian speaker, accused President Biden of letting Afghanistan “fall apart” because he “wants a couple hundred thousand more Ilhan Omars to come into America to change the body politic.” Rep. Omar (D-Minn.) is not from Afghanistan. But she is a Muslim. And for Kirk, as for the shooter, that means she can’t ever be truly American.

Similarly, on Facebook, outspoken Christian-nationalist Rep. Marjorie Taylor Greene (R-Ga.) shared a video claiming that “Zionist supremacists” conspired to overrun Europe and replace Whites there, while Muslim refugees were “flooding” Europe in order to replace its legal systems with sharia law. Greene commented, “This is what the UN wants all over the world.”

As the Buffalo suspect explains, the perceived threat is not just racial but religious or, more specifically, ethno-cultural. The White Western way of life needs defending, by law or by violence.

Of course, not all conservative White Christians embrace the “great replacement” theory. And very few would endorse the shooter’s acts. Still, any remaining boundaries between white nationalism and Christian nationalism are becoming blurrier by the day.