With polarization at a peak, the number of House ‘crossover districts’ is at its lowest in a century 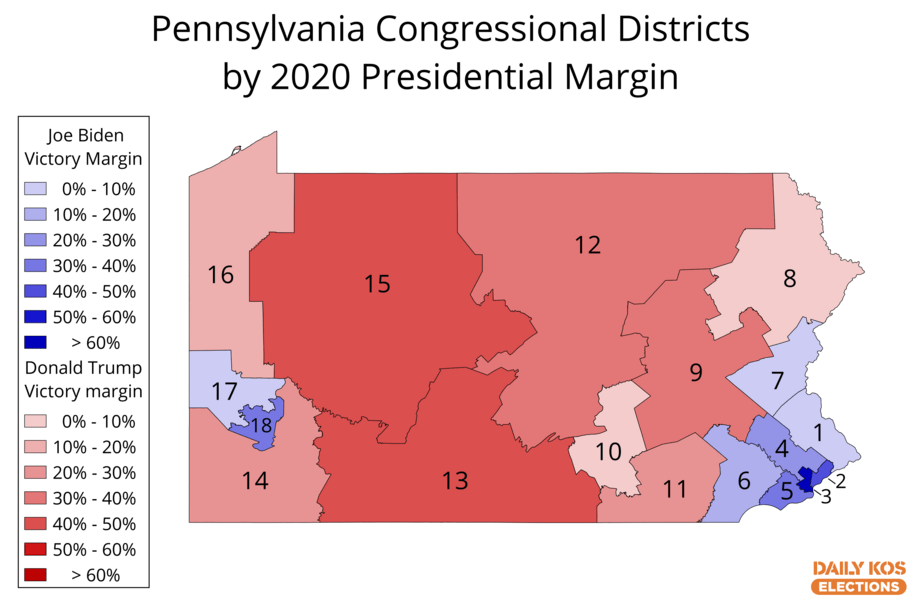 The number of crossover districts—16 in total—is extremely low by historical standards but continues a downward trend reflecting our nation’s increased political polarization. Following the 2016 elections there were 35 crossover seats, which was an increase from 2012 but a steep drop from the 83 produced by the 2008 Democratic wave. For much of the post-war era, there were 100 or more such districts, according to the Brookings Institution—to find a lower proportion in a presidential year, you have to go back to the GOP landslide of 1920, when there were just 11 crossovers.

These districts are now concentrated in just 11 states—as you can readily see in our “hexmap” that displays all districts at the same size—but Pennsylvania holds the unique distinction of being the only state in the nation that’s home to both a “Biden-Republican” and a “Trump-Democrat” seat: the 1st and 8th districts, respectively.

The 1st, located in the Philadelphia suburbs, is held by Republican Rep. Brian Fitzpatrick, a perpetual Democratic target who’s always managed to run ahead of the top of the ticket. He did so again in 2020 even as his district went from a 49-47 advantage for Hillary Clinton to a wider 52-47 win for Biden. Fitzpatrick nonetheless held off Democrat Christina Finello by a healthy 56-43 margin.

The 8th, anchored by Scranton/Wilkes-Barre in the northeastern part of the state, also got bluer, though it still went for Trump: In 2016, it supported him 53-44 but this time backed him by a much narrower 52-47 spread. Democratic Rep. Matt Cartwright hung on by outperforming Biden, beating Republican Jim Bognet 52-48.

But Pennsylvania also contributed to the decline in crossover seats on account of the fact that the 17th District, based in the Pittsburgh suburbs, flipped from supporting Trump 49-47 to backing Biden 51-48. Democratic Rep. Conor Lamb, who is now considering a bid for Senate, was fortunate to hold off Republican Sean Parnell in a tight 51-49 race.

At the other end of the state, the heart of Philadelphia yielded up the undisputed new holder of the title “bluest district in America.” That now belongs to Democratic Rep. Dwight Evans’ 3rd District, a majority-Black district that backed Biden by a thunderous 91-8 margin. That just edges out California’s 13th District, held by Democratic Rep. Barbara Lee, which favored Biden 89-9. It also displaces the 2016 champ, New York’s 15th District, which at 86-13 Biden has fallen to eighth overall.

With our efforts now complete at the congressional level, we’ll soon be turning our attention to crunching the results of the presidential election for the nation’s 6,764 legislative districts, which we expect to occupy us for quite some time.

But before we switch gears, we want to recognize a long list of people who selflessly helped us gather hard-to-find data and patiently answered our many arcane questions, folks without whom this project would never have been possible. We are particularly grateful to Derek Willis and his team at the invaluable OpenElections project, which is devoted to collecting and publicizing election results, and Benjamin Rosenblatt of Tidal Wave Strategies, who’s been tireless in his efforts to track down data from every county in New York.

We are also indebted to:

Lastly, we must thank the godfather of our “pres-by-CD” project, Jeff C., who emerged from behind the scenes in early 2009 to steer our very first attempt to calculate this data when we were still known as the Swing State Project. Jeff brought a level of accuracy, transparency, and rigor to the effort that guides us to this day, and he continues to provide us with his singular advice.

P.S. We have one final request for all readers: If you use our data, we’d be very appreciative if you’d cite Daily Kos Elections by name and link to us. Thank you!

Germany set to vote in most unpredictable elections in years