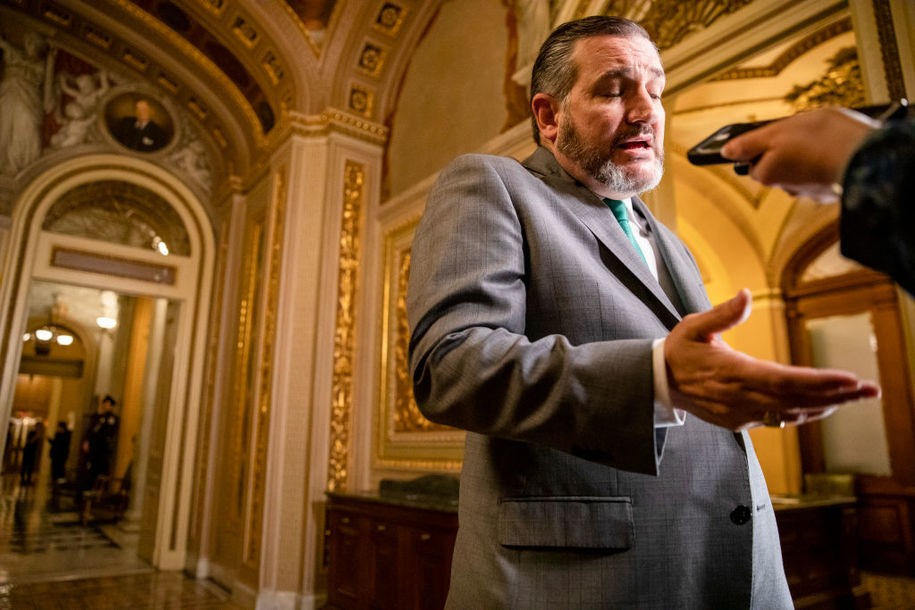 Sen. Ted Cruz jaunts off to Cancun, leaving his Texas constituents to fend for themselves without power in subzero temperatures. But it’s not like he’s responsible: No, he’s blaming his kids.

Sen. Ted Cruz, back in Texas, says it was “obviously a mistake” to go to Cancun.

You can hear protestors chanting “Resign!” in the background. pic.twitter.com/FwA6Dsg4fv

This is really quite the pattern lately. Let’s start in reverse order, shall we?

Thousands of people wearing Trump garb and using Trump flags as weapons assault the U.S. Capitol. Most of them are caught on film and boasting about their insurrection on social media. Upon arrest, most of them claim they were lured into attacking the Capitol by Donald Trump. As a result, five people die.

Who does the conservative media say caused the riots? “Antifa!”

Trump gets his ass kicked in the 2020 election. Could it have been a) because of the hundreds of thousands of dead Americans?; b) because he showed not a shred of empathy?; c) because he was the most criminal, racist, misogynistic, incompetent president in American history?; d) because he had no achievements to speak of that helped the American people?; or e) all of the above?

No, it was “Election fraud! Stop the Steal! Dominion!”

Over 500,000 people in this country, more than any other, die from the novel coronavirus. Trump was president for the vast majority of those deaths, and his lackeys were in charge of coordinating a federal response.

Who is responsible? “China! The World Health Organization!”

Who should get the blame? “Andrew Cuomo!” Why? Because New York nursing homes!”

Would that have changed anything about the federal response? “Didn’t you hear me? Andrew Cuomo!!!”

Meanwhile, unemployment, hunger, and evictions skyrocket as businesses close. Could it be because of Trump’s gross mismanagement of the worst pandemic ever to hit the country? “No, it’s the Democratic governors!“

Why? “Because they should have left their businesses open!.” Wouldn’t that have doubled the number of deaths? “No! Hoax! Flu!”

Trump is impeached. Is it because he tried to extort a false story out of Ukraine to damage Joe Biden? And that was akin to bribery? And he tried to cover it up?

No, it’s because of “Hunter Biden. It’s all on a laptop somewhere … We’ll get back to you.”

Millions of people protest in the streets of America for Black Lives Matter. Why are they protesting? Maybe because of bad, violent, racist cops? “No, it’s Black people’s fault cops use so much force! Portland! Blue Lives Matter! Portland! Antifa! Look, they broke a window in Portland?”

Republicans get hammered in the 2018 midterms despite gerrymandering the entire country. Was it because a) of Donald Trump; b) they had no ideas except tax cuts for mega-corporate CEOs; c) Donald Trump; or d) Donald Trump? “No, none of those reasons, and to prove it we’re going to double down on Donald Trump!“

It goes on and on. Global financial collapse? “It was all the fault of poor Black people buying houses they couldn’t afford!”

Katrina?“It was that Black mayor’s fault! He should have used the schoolbuses!”

Just once, I’d like to hear a conservative say, “Man, we really f*cked up, or “Totally our fault, folks,” or “We made a big mistake here.”

But that may never happen. Because being a member of the “personal responsibility” party means you’re never, ever responsible for anything.

Boston Fed president Eric Rosengren to step down this week

As Israeli unicorns rise from one five years ago to 13 in June, a look at the startup scene's impact on Tel Aviv, including booming housing and living costs (Wall Street Journal)