Will the Longhorns “Chase Money” in 2022, or Will They Chase Wins? 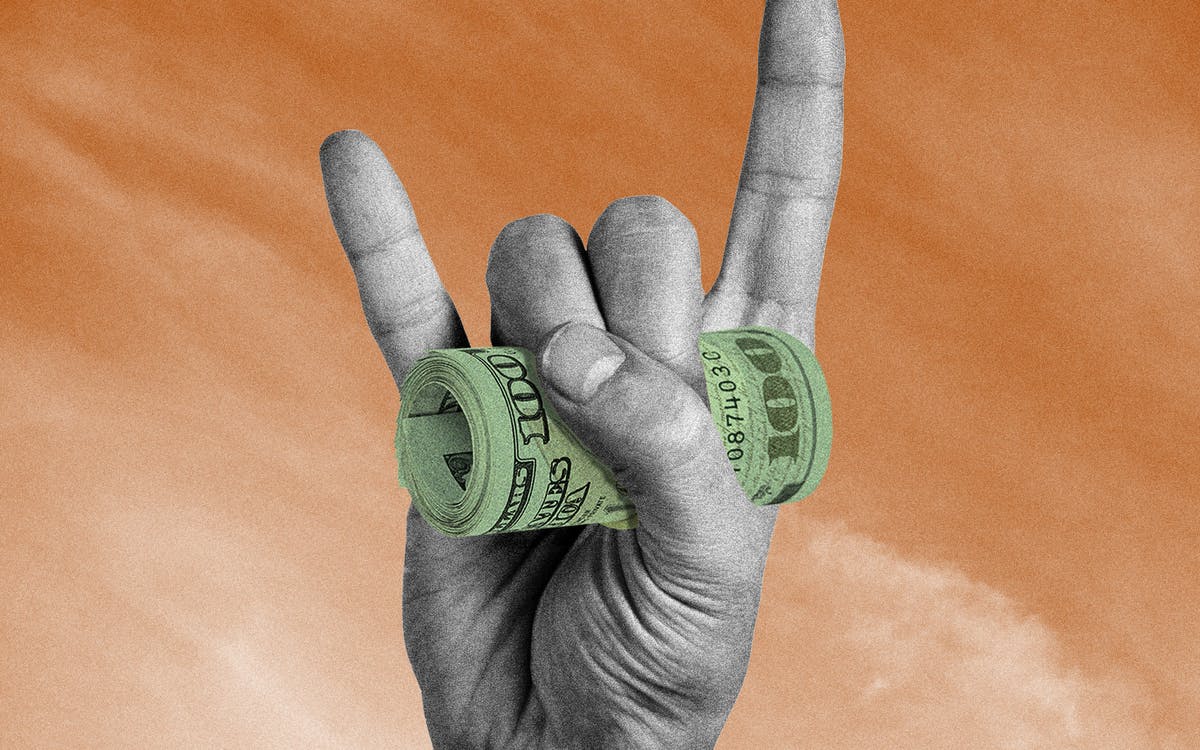 The Texas Longhorns were having their usual great off-season. Excellent recruiting class. Arrival of a potential franchise quarterback. Ranked sixth nationally in something called the ESPN Power Index 2022. In short, the program oozed confidence even after a dozen underachieving seasons.

If college football isn’t your thing, you need to know that off-seasons are a big deal around the Forty Acres. There’s something about a stretch of months when games aren’t being played—no blown leads, no late collapses—that convinces Longhorn fans that We’re back, baby!

That’s why it was so sobering to see one of the team’s leaders—fifth-year senior defensive tackle Moro Ojomo—inject some arguably bad vibes into the usual springtime optimism.

Actually, Ojomo’s comments to reporters earlier this month reflected what anyone with even a casual interest in the sport knows to be true: losing has become “ingrained” at Texas.

Ojomo said a few teammates cared more about women, parties, and money than winning games. He also said—and this is important—that only the players could fix the problem. He understood that coaches, even great coaches, can only do or say so much. Elite programs create a culture in which players hold each other accountable.

When a Houston recruit named Jaylen Waddle, who now plays for the Miami Dolphins, visited Alabama several years ago, he came away impressed by the way Crimson Tide players kept one another focused on the team’s ultimate goals of competing for and winning national championships. Coach Nick Saban had recruited the talent and established the expectations, schedules, and infrastructure for success, but the program maintained its excellence because the players remained committed to it.

“Players have to make a stand and basically be like, ‘Enough is enough,’ ” Ojomo said during his 25-minute question-and-answer session. He added that some players are “more worried about being on Sixth Street than, like, balling and making fifty million dollars. It’s crazy. . . . They’re eighteen- to twenty-two-year-olds that want to chase women, want to chase money, want to chase alcohol, and they don’t see the future. They’re distracted by what’s in front of them.”

Referring to how common mediocre seasons have become in Austin, Ojomo added: “Seven-six BS at Texas isn’t happening anymore. We have the ability; we have the talent—get your mind right.”

“It’s such a hard thing, especially [for] guys that haven’t been in a winning culture,” he also said. “It’s very easy for a lot of these powerhouses to keep going, because it’s established. So the new guys come in, and they’re like, ‘Oh s—, this is how we have to do it. This is what we do.’ ” That culture hasn’t existed at UT for years, and Ojomo said establishing it is easier said than done: “They always talk about coming here and changing stuff. Coming here, changing stuff, it’s like it’s ingrained. Like you’re uprooting, what? Ten years of s— that’s just been let go.”

Ojomo was handpicked by UT officials to speak during spring practice because he’s a senior team leader and because his life story—a Nigerian immigrant, a pastor’s son, and a devoted student—is so compelling (and wholesome). As the Austin American-Statesman put it: “UT officials usually make only key contributors or captains available. It’s a merit-based approach, to a large degree, and common in college athletics.”

Ojomo’s words carry weight because he’s among the most respected players on the roster and is someone who represents everything college football says it wants to be. He has started 25 games for the Longhorns and is on track to graduate. He worked for a financial asset management company last summer and has been effusive in his praise of the UT McCombs School of Business.

Ojomo’s only misstep was singling out a couple of his teammates. Regarding the Texas offensive line, he said: “Christian Jones has got to figure it out. Andrej Karic and Jaylen Garth need to grow up.”

Second-year Longhorns coach Steve Sarkisian should have told—and probably did tell—Ojomo that he can never criticize teammates in public. If he wants to call them out behind closed doors, fine. Otherwise, Sarkisian has to know that Ojomo spoke a difficult truth about the state of Longhorns football. He could have mostly backed Ojomo up and told reporters that those problems are exactly what everyone in the entire program is dedicated to fixing. Instead, Sarkisian said Ojomo wouldn’t be allowed to speak to reporters for the foreseeable future.

(Nothing Ojomo said was much different from the content of a postgame rant from assistant coach Bo Davis last season that was caught on video, although Davis didn’t name names.)

Sarkisian called it “a little disheartening” that Ojomo’s comments would be construed by some as characterizing the entire team. “Culture is always challenging; culture is organic,” the coach told reporters. “And I think Moro would be the first one to tell you, I think he’d love to have some of the things he said back.”

Words aside, Texas has become the gold standard for college football underachievement, despite having the deepest pockets and finest facilities (or close to them) in the land. Despite signing first-rate recruiting classes almost every year. Despite all of the energy and appeal of Austin. Even with all those advantages, UT has finished the season ranked higher than nineteenth in the AP poll only once over the last twelve seasons.

Sarkisian is the fourth head coach in that span to attempt to bring change, and his first season couldn’t have gone much worse. Texas lost six straight games for the first time in 65 years on its way to a 5–7 record. Kansas hung 57 points on the Longhorns. Texas blew double-digit leads in losses to Oklahoma, Oklahoma State, and Baylor. Of 130 Division I football programs, Texas ranked ninety-ninth in defense.

Failing to hold leads and getting pushed around at the line of scrimmage indicate a lack of something besides talent. Some call it resolve. Some would call this team “soft.” That’s what has become “ingrained” at Texas.

But this much is also true: Texas has had a terrific off-season. Even the most cynical Longhorns fans would be justified in springing for a spot on the UT bandwagon. Sarkisian is on track to replace about thirty players on his roster, and the biggest of those changes comes for the most important position: quarterback.

Ohio State transfer Quinn Ewers would have been the nation’s top high school recruit in 2022, except he decided to forgo his senior season at Southlake Carroll to attend Ohio State University and cash in on about $1 million in endorsement deals under the NCAA’s new rules permitting athletes to earn money from their names, images, and likenesses. (Texas high school regulations prohibit players from cashing in on such deals.)

Ewers rode the bench in Columbus last season, entered the transfer portal in December, and has already enrolled at Texas and participated in spring practice. Texas fans know better than almost anyone how much impact one great player can have on a program. Under Mack Brown, the Longhorns were 75–10 in games started by quarterbacks Vince Young (30–2) and Colt McCoy (45–8).

During the summer before Texas won the 2005 national championship, it was Young who organized early-morning workouts with his teammates. When Texas was down sixteen points at Oklahoma State that year, it was Young who interrupted Mack Brown’s halftime speech by putting a hand on Brown’s shoulder and saying: “We got this, coach.” Then, less than a minute into the second half, Young broke free for an 80-yard touchdown run to begin the Longhorns’ comeback. He finished with 506 yards of total offense as the Longhorns rallied to win, 47–28.

Texas may never have another college player as great as Young was, but Ewers has the type of ability that can turn the program’s fortunes around—and quickly. If he’s close to being the player he’s projected to be—with help from a slew of talented new arrivals on the offensive and defensive lines—UT certainly should expect much-improved results this fall.

Officially, Sarkisian said the starting quarterback job is still a competition between Ewers and sophomore transfer Hudson Card. But it would be a huge surprise to see anyone other than Ewers starting the season opener against Louisiana-Monroe.

A week later, Alabama comes to Austin to provide the mother of all stress tests for Sarkisian’s program. If the issues Ojomo raised haven’t been resolved by then, then expect the Crimson Tide to serve Texas a bitter slice of humble pie. But if the Longhorns can rally around one another over the next five months and somehow get to the point of springing an upset on ’Bama, then there won’t be a single empty seat on the UT bandwagon.