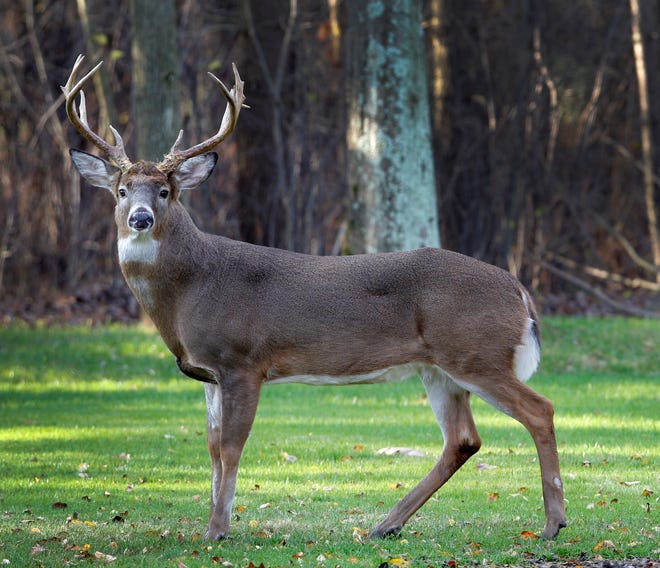 In its meeting on Wednesday, the Commission on Wildlife, Fisheries and Parks passed a regulation to remove any county from a CWD management zone that has not had a positive case in three years. Counties removed would no longer be under CWD management regulations such as a ban of supplemental feeding of wildlife.

Counties coming out of CWD management zones include Sharkey, Leflore, Tallahatchie and Pontotoc.

It was introduced by commissioner Bill Cossar.

“What I’m saying is I believe in supplemental feeding and I also understand all there is about CWD, but when we adopted our plan, once you got into a CWD zone there wasn’t an expiration date on that — after this date you come out,” Cossar said in the meeting. “We don’t have an exit ramp to get off out of the CWD zone if you don’t find any sick deer for a number of years.”

That wasn’t exactly the case, though.

Deer hunting:How to get more bucks on camera (and fewer pictures of other animals)

Mississippi’s CWD management plan already included a mechanism to remove counties from CWD management zones in as little as three years if no additional CWD-positive deer were found. It was adopted by the commission in 2021.

It was an assessment tool that provided a score which indicated the probable prevalence of the disease. The tool took into account certain data collected by the department and factors like geographic features that could impede the spread of the disease. Any county that scored lower than 55 would have been taken out of a CWD management zone, and those scoring higher would have remained.

Hunters played a key role in the process. Hunters in these counties were required to submit an average of 300 or more tissue samples for CWD testing per year from deer for three years before the department determined if the county remained in the CWD management zone or was removed.

However, the assessment tool was not used because it was only in place for one year.

Afterward, Cossar said he was unaware of the provision that could allow counties to be removed and made the motion to be fair to hunters and allow them to provide supplemental feed for deer if they want in counties where no additional cases have been discovered for at least three years.

“If there’s been only one deer found in five years, it’s not a pandemic,” Cossar said. “Chronic wasting disease is serious. It’s probably the most serious thing wildlife has faced, but it’s not everywhere.”

Deer hunting:Early velvet season for bucks set. Here’s what you need to know

Claiborne, Lafayette, Prentiss and Tishomingo counties will now be included in CWD management zones and will be subject to supplemental feeding bans and other regulations designed to slow the spread of the disease, which is fatal to white-tailed deer and other cervids such as moose and elk.

In the case of Claiborne County, it will be included in the Issaquena CWD Management Zone because a CWD-positive deer was found in Tensas Parish, Louisiana, close to the county line on the Louisiana side of the Mississippi River.

Subscriber exclusive:Want a hunting camp that’s the envy of your friends? Here’s what $13.9 million gets you

Also, transporting deer carcasses harvested in CWD management zones outside the zones is banned except for the following:

For complete information on CWD in Mississippi, visit www.mdwfp.com.

GolfSuites hits snag in Madison, says it will push through. Find out the details here