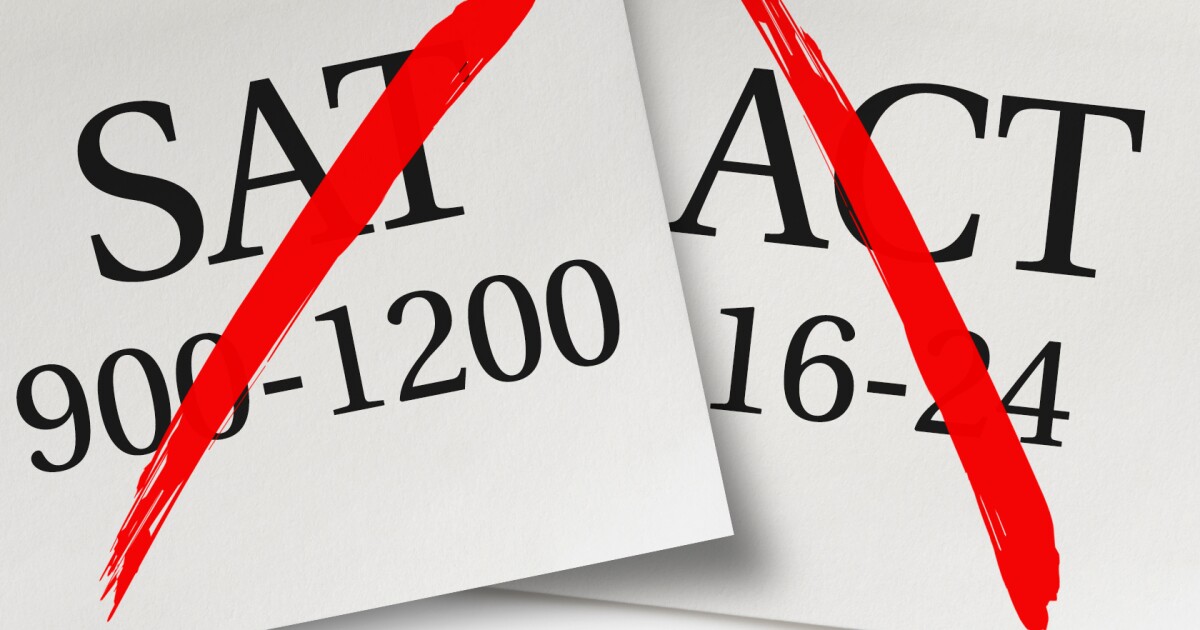 The Fiske Guide to Colleges, a widely used source of information for applicants and parents, will stop publishing ACT and SAT score ranges for all 325 institutions listed in its pages. In an email to The Chronicle on Wednesday, Edward B. Fiske, the guide’s creator and editor, said the change was “simply the right thing to do in the current context.”

The current context is this: Circumstances have shredded the status quo, complicating the very meaning of test scores and all that they supposedly tell us.

Previously, the Fiske Guide listed the range of test scores for the middle half of enrolled freshmen at each college, a standard practice in the admissions realm. Many selective institutions report their “middle 50,” the range of scores between the 25th percentile and the 75th percentile. That helps students understand where their own ACT or SAT scores would fall within a given applicant pool — a gauge of their competitiveness for admission. For some applicants, that’s illuminating.

But “several recent trends have conspired to call into question the validity of admissions-test data — and hence the reliability of using them,” the introduction to the forthcoming 2022 edition of the Fiske Guide says.

The first trend was the long-term growth in the number of test-optional colleges: By the beginning of the pandemic last year, more than 1,000 four-year institutions didn’t require the ACT or the SAT. Then, after Covid-19 shut down the world, more than 600 other institutions suspended their testing requirements, at least temporarily, according to the National Center for Fair & Open Testing. Widespread testing-site closures prevented hundreds of thousands of applicants in the current admissions cycle from taking either exam; just 44 percent of students using the Common Application had submitted an ACT or an SAT score through February (down from 77 percent last year).

All that led Fiske and the guide’s editorial advisory group of more than two dozen college counselors to question whether to continue publishing middle-50 numbers. In early discussions, Fiske wrote in the email, some counselors said that score ranges are a familiar part of the admissions process — and that failing to provide them might “turn off” some readers. “In the end, though,” he wrote, “everyone came around to the view that, whatever disappointment we might cause, we should not be in the business of providing dubious information.”

Here’s what the introduction to the new guide says: “Unless the published score ranges reflect the scores of all freshmen, not merely those who were able to take the tests and chose to submit scores, the usefulness of these score ranges for assessing both an applicant’s chances of admission and where they would fit into the academic environment of the school is seriously compromised. Incomplete, and thus misleading, scores serve no one’s interest.”

The dearth of ACT and SAT scores during the 2020-21 cycle did not necessitate the removal of score ranges from the guide. After all, the numbers that would have appeared in the new edition, the introduction explains, would have come from students who were freshmen in 2019, who took the exams long before the pandemic began. But that data, the introduction notes, “would not reflect the realities that students will encounter when they enter in the fall of 2021.”

The debate about standardized testing is now unfolding in a world that’s reeling from the pandemic, which has intensified longstanding racial and socieconomic inequities. The introduction includes a strongly worded statement describing that context. “There was a time when one could make a credible argument that, since the tests, especially the SAT, were not curriculum-oriented, they offered colleges an independent way to identify ‘diamonds in the rough’ — talented applicants, especially those from racial or ethnic minorities or from disadvantaged backgrounds, whose abilities might otherwise have gone unnoticed. In some cases, this still happens, but the broader argument no longer holds water. … Indeed, a wide body of research has shown that SAT and ACT scores closely track with socioeconomic data and may say more about a student’s ZIP code than about their academic potential.”

Alyson Tom, associate director of college counseling at Castilleja School, in Palo Alto, Calif., serves on the guide’s editorial advisory board. She described the change as revolutionary. “Even though it’s a small thing, it’s actually a really big thing, because words matter, language matters,” Tom said. “By not including these stats, the guide is saying they’re not as important as how you’re doing in school, the classes you’re taking, the grades you’re getting. It’s making a really big statement.”

Tom, who previously worked in Rice University’s admissions office, described middle-50 scores as useful but sometimes “extraordinarily limiting” for applicants. She has advised strong students whose scores fell below the middle-50 range of a particular college they were considering. “That can be discouraging,” she said. “They might cut themselves out of that applicant pool before they’ve even started, even though they could still be competitive at that college.”

Then there’s the other side of the coin. Tom, like many counselors, has worked with families who perceived that one college wasn’t as good as another — and perhaps not worth considering — just because its middle-50 was somewhat lower.

In the future, the many students who will continue to crave middle-50 scores from each and every college on their list will be free to toss their Fiske Guide aside and look up the numbers on College Navigator, on colleges’ websites, or in various rankings, such as U.S. News & World Report’s annual Best Colleges guide.

On the long list of concerns in higher education, such as the recent decline in the enrollment of Latino/a students, the editorial decisions of a guidebook catering to affluent applicants eyeing highly selective colleges doesn’t rank highly. The fate of the ACT and the SAT will turn on how many colleges that required the exams before the pandemic decide to reinstate their testing requirements after Covid-19 recedes. If anything is keeping officials at the ACT and the College Board up at night, it’s surely not the changes that Fiske, a former education editor at The New York Times, might make in his guide.

Still, the change is a noteworthy sign of the times. Though the ACT and the SAT were created to measure an applicant’s potential, test scores long ago insinuated themselves into a whole set of products designed to measure the quality of a given institution. Those products, which have long emphasized the importance of test scores, form the vast scaffolding around higher education, shaping many people’s perceptions of what those numbers tell you, about a college or a student.

That scaffolding will endure. But one small piece of it just fell away.