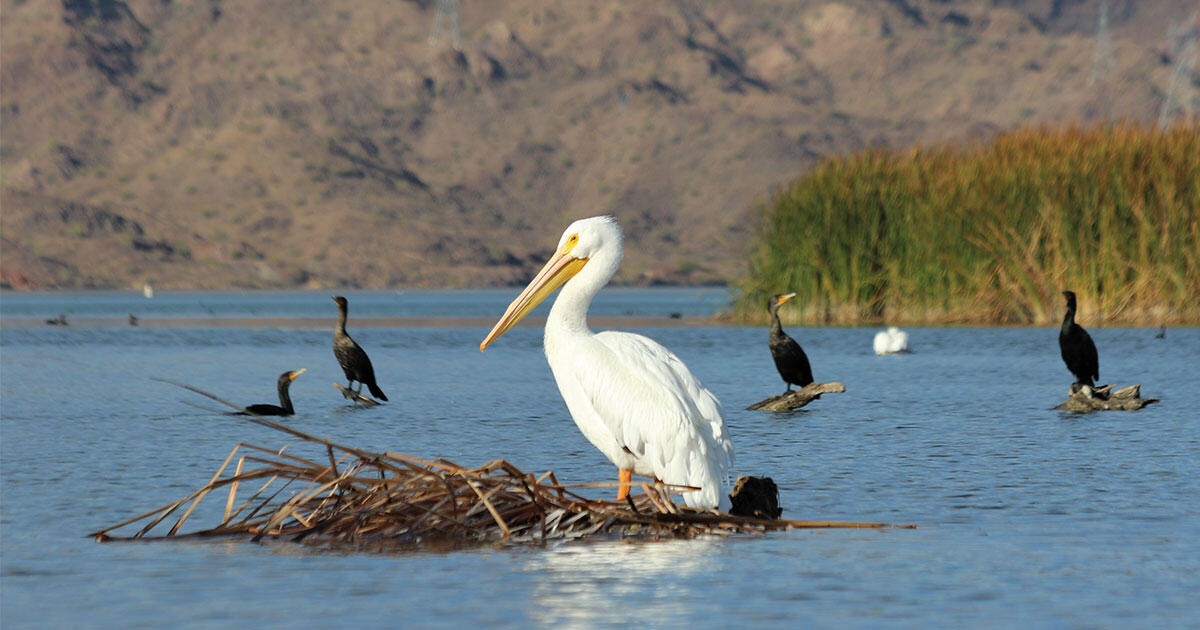 Q: Why are we in this situation, with the Colorado River and its reservoirs shrinking so quickly?

A: Truth is, we saw this coming. We use more water than the river provides. The only reason we got away with it for so long was because the reservoirs were full when the climate’s shift to hotter temperatures and reduced river flows began 22 years ago. We did not reduce the amount of water we used until recently, and it has not been enough in the face of drought exacerbated by climate change.

Q: What happens if we stick with the status quo?

A: If we keep doing what we’re doing, and take water out of the reservoirs—not because it’s wise but because the law allows it—our system as we know it would crash. Water could not be released from Lakes Powell or Mead. A “Day Zero.” This is bad for ALL water users in the Colorado River basin.

Q: Why does this matter for birds?

A: A future without a running Colorado River would impact 400 bird species including California Condors, Bald Eagles, Southwestern Willow Flycatchers, and countless fish species and other wildlife that reside in and migrate through the Colorado River basin. The Colorado River Delta alone provides habitat for 17 million birds during spring migration and 14 million in the fall, from American White Pelicans and Double-breasted Cormorants to Tree Swallows and Orange-crowned Warblers.

And because the Delta acts as a “bottleneck” for migrating birds—meaning concentrations of bird populations are significantly higher inside its geographical boundaries than outside of them—changes to water availability or habitat in the Delta could have outsized impacts on tens of millions birds. These impacts could be seen on a global scale.

Q: Water users need to reduce use by 2-4 million acre feet for 2023, and possibly for 2024 and 2025, according to the U.S. Bureau of Reclamation (USBR). How will the seven Colorado River Basin states (Arizona, California, Colorado, Nevada, New Mexico, Utah, and Wyoming), Tribes, other water users, and the federal government agree to the water reductions necessary to stabilize the river and reservoir system?

A: The short answer: we don’t know.

A deadline set by USBR came and went this past August. It’s unclear whether the seven states and water users will reach their own agreement on how to use less water, if federal officials will decide, or, likely the worst-case scenario, if the courts will be the ultimate decision-makers. In the past, the states, Tribes, and other water useres have managed to come up with agreements on how they will use less. Presently, the Upper Basin states (CO, NM, UT, and WY) have agreed to reopen a program that pays water users to use less water. They have also agreed to examine how releases of water stored behind dams in the Upper Basin can help stem the decline of downstream reservoirs such as Lake Powell. The trouble now is water levels are dropping so quickly in our two largest reservoirs—Lake Powell and Lake Mead—and water managers as a whole have not been able to come to agreements fast enough.

All water users could agree to use less. That means cities, farms, and businesses could all agree to reduce the amount of water they use so that the difficult task of stabilizing the system is distributed more evenly.

Q: Why aren’t we all doing that right now—using less?

Part of the reason more water users are not cutting back is because of the current way water is managed. Water management in the Colorado River Basin is based on a seniority system of water rights. First come, first served. This means those with junior rights would have their water reduced completely before a senior water rights holder would see their water reduced at all. While this has been the way the system has operated for more than 100 years, it is wearing thin in the face of 20+ years of drought and a shrinking river.

In the 1960s, Arizona accepted junior priority rights on a portion of its Colorado River water in exchange for federal funding for the Central Arizona Project (or CAP, the 336-mile long canal that delivers Colorado River water to the central, populous parts of the state). As such, Arizona has stepped up and taken water cuts, sooner than originally anticipated. That’s a good thing. But if Arizona is forced to bear the entire shortage burden in the Lower Colorado River Basin, the impacts to millions of people, including vulnerable communities, will be considerable.

In the face of a shifting climate—reduced snowpack in the mountains due to hotter temperatures and thirstier, drier soils, resulting in less water in rivers—previous efforts to reduce use and save water in Lake Mead, such as the Drought Contingency Plan and the 500+ plan, have not been enough to prevent the Colorado River system from crashing.

Q: What are specific ideas for using less water and improving the outlook of this dire situation?

A: We could pay people to use less water as well improve the health of the ecosystems and watersheds on which we all rely. Recent federal legislation such as the Inflation Reduction Act allocates $4 billion across the West to do just that. We want to see wise use of this funding—through multi-year agreements and durable projects that reduce water use and improve the health of our rivers and watersheds.

How will we get there?

There is also plenty of work to do just within the state of Arizona to improve our water outlook. We must do everything we can to use the water we do have as wisely as possible. Audubon and our partners in the Water for Arizona Coalition developed the Arizona Water Security Plan, which outlines six critical steps the state of Arizona could take to get our own water house in order.

Q: What should we be watching out for in Arizona?

A: Given the circumstances, some may want to weaken existing laws that protect groundwater in the populous parts of the state. Weakening existing protections just so Arizona can continue to grow without changing how we use and manage water would be irresponsible and short-sighted.  We should be closely watching the next legislative session to ensure that doesn’t happen.

Furthermore, Arizona has failed to pass meaningful groundwater protections in the rural parts of the state where none currently exist. We cannot allow Arizona’s rural groundwater to meet the same fate as the Colorado River–especially as rural leaders plead for change. For the benefit of all people in the state, lawmakers must allow rural communities to protect their groundwater supplies. And the better we manage all of our water resources, the more credible a partner Arizona is with other states in ongoing Colorado River negotiations.