Why Does the Official Story of the Uvalde School Killings Keep Changing? – Texas Monthly 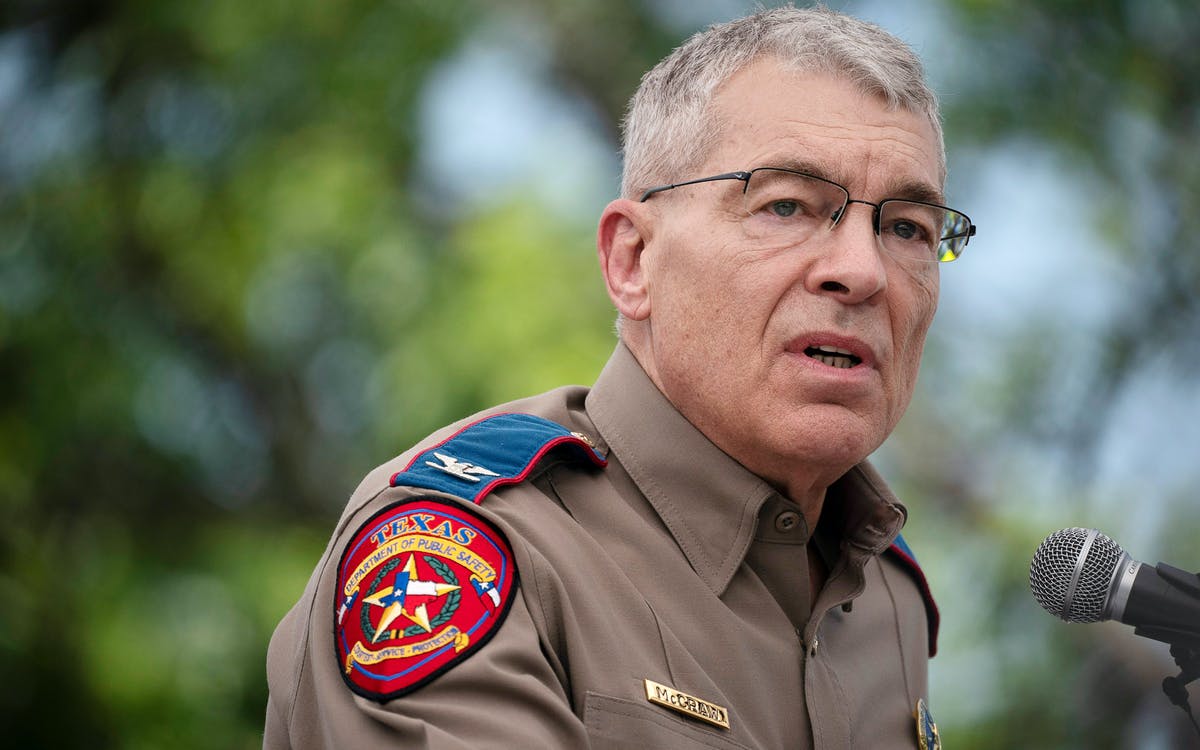 In the immediate aftermath of Tuesday’s school shooting at Robb Elementary School in Uvalde, Governor Greg Abbott was quick to praise the reaction from law enforcement. “As horrible as what happened [was], it could have been worse,” the governor said at a press conference in the small town on Wednesday morning. “The reason it was not worse is because law enforcement officials did what they do. They showed amazing courage by running toward gunfire for the singular purpose of trying to save lives. It is a fact that, because of their quick response, getting on the scene, being able to respond to the gunman and eliminate the gunman, they were able to save lives.”

In the days since the shooting, the information we’ve learned about what happened in Uvalde has thrown practically everything Abbott stated as “fact” into question. At a press conference on Friday afternoon, the governor professed to being “livid” that he was “misled” about what happened. Since Wednesday, we’ve seen video of parents being tased and handcuffed by police even as their children were inside the school where students were being murdered—and where police said they feared to venture. We’ve heard Texas Department of Public Safety director Steve McCraw boast on Wednesday about the “orderly” manner in which a “tactical stack” of local police officers and Border Patrol agents was put together, and then change the story dramatically by Friday.

That police badly mishandled the crisis is no longer in question. McCraw conceded on Friday that it was “the wrong decision, period” for police to wait outside the school while a classroom full of children was trapped inside with the killer. But with every passing hour and day since Tuesday, the public’s trust in the agencies sworn to serve and protect them has suffered from the way those agencies have revised their stories.

Here is a ticktock of the various accounts the Department of Public Safety has provided since the tragedy unfolded.

In the immediate aftermath of the shooting, law enforcement officials offered few details. A post on the Uvalde Police Department’s official Facebook page indicated that the school was an active police scene, and later was updated, shortly after 1 p.m., with a notice that the shooter was in police custody. At a press conference that afternoon, an official said that a gunman had entered the school and was eventually stopped and killed by law enforcement. It’s not unusual, of course, for initial reports to be vague as those responsible for informing the public work to collect details.

Tuesday Evening: The Version in Which the Shooter, Wearing Body Armor, Fought His Way Into the School

Around the time that Abbott made his comments about the “amazing courage” of law enforcement, DPS sergeant Erick Estrada claimed that the shooter, with “a rifle and body armor on,” approached the school. Estrada’s colleague Travis Considine, the department’s chief of communications, said that a school police officer attempted to stop the killer outside of the building, and that the two “exchange[d] gunfire,” during which the gunman “shoots the officer, wounds him, [and] goes into the school.” This version of events was backed up by a third DPS spokesperson, Lieutenant Christopher Olivarez, who maintained that there had been an exchange of gunfire that led to the school resource officer being shot and injured before the massacre began.

On Friday, Abbott claimed to have been told the same story by the DPS officials who briefed the public. If so, he was misled. Officials now say the shooter did not wear body armor, and he was not confronted by anyone before entering the school.

Wednesday: The Version in Which Police “Contained” the Shooter in a Classroom Full of Children

On the day following the carnage, videos of the scene outside of the school and posted on social media began to circulate. Those videos include footage of panicked parents being kept away from the perimeter of the school by police, who had declined to attack the shooter, even as he was killing schoolchildren. In one video, police can be heard shouting at parents who urge them, more and more frantically, to take action to save their children; one officer, in response to a parent who asks why he’s not inside trying to stop the shooter, shouts, “Because I’m having to deal with you.” The video depicted police using pepper spray and handcuffs on parents whose children were inside the building.

Once the videos went viral, DPS’s version of events changed. McCraw now claimed that, while a school police officer had “engaged” the shooter, the two did not exchange gunfire. Police “did engage immediately,” McCraw said. “They did contain him in a classroom, and they put the tactical stack together in a very orderly way, and of course breached and assaulted the individual.” Despite the immediate engagement that McCraw alleged, however, the shooter had been “able to make it into the school.” He was, McCraw claimed, “pinned down” inside a fourth-grade classroom by the police outside the school. Officers could not enter the school, McCraw said, because the gunman shot at them, so they broke windows to engage with him and try to rescue students and teachers. In another version offered by DPS on Wednesday, the shooter “barricaded himself” in the classroom.

Thursday: The Version in Which No One Confronted the Shooter, While Police Rescued Their Own Children From Classrooms Not Under Fire

Two days after the massacre, during an interview with San Antonio’s KENS-TV, Olivarez described the actions that local police supposedly took upon arriving on the scene: “We’ve heard that some law enforcement officers went into the school to get their kids out. Can you talk about that?” the station’s reporter asked. Olivarez responded, “We do know that some police officers tried to enter the school to get their kids out, because it was an active shooter situation,” and added: “We’ve got to keep acknowledging the brave men and women that actually were there on scene and met the suspect.”

During the interview, Olivarez made multiple references to the officers who allegedly engaged the shooter. But later that day, regional DPS director Victor Escalon Jr., offered a version of events that sharply contradicted the ones that were crafted by his agency on Tuesday and Wednesday. “It was reported that a school district police officer confronted the suspect that was making entry,” Escalon acknowledged. “Not accurate. He walked in unobstructed.” During the same press conference, DPS officials alleged that the gunman entered through an unlocked door.

The alacrity with which the shooter entered the school was also overstated, according to the revised version of events that Escalon began giving at a press conference on Thursday. After the gunman crashed his truck on the street just outside the school at 11:28 a.m., the public was now told, he remained outside the building until 11:40 a.m. During that time, Escalon alleged, “Officers are there, the initial officers, they receive gunfire. They don’t make entry initially because of the gunfire they’re receiving.”

Those officers, Escalon said, called for additional resources, and also evacuated students and teachers, which was consistent with the account Olivarez had given. When a reporter asked Escalon to confirm that the shooter was outside the school for twelve minutes before he entered the building, he agreed with the reporter’s math. “We got a crash and a man with a gun, and then you have responding officers. That’s what it is, if that’s twelve minutes,” Escalon acknowledged. He also spoke of the agency’s duty to provide information to the public. “At the end of the day, our job is to report the facts and have those answers,” he said. “We’re not there yet.”

Friday: The Version in Which the Police Believed All of the Children in the Classroom Were Already Dead, and Thus the Situation Did Not Require Urgency

On Friday, McCraw held a press conference in which he contradicted several  of his earlier statements. He stopped short of a mea culpa—when asked if he would offer an apology, McCraw replied that “if I thought it would help, I’d apologize.” But he did attempt to offer an explanation—a new one—for the actions, and inactions, of officers on the scene.

The Uvalde school district’s chief of police, McCraw claimed, had made the decision that there was no longer an active shooter in the elementary school. The gunman was instead treated as a “barricaded subject,” McCraw said, which was why the focus of the officers on the scene was on preventing the parents from attempting to rescue their children, rather than on engaging the killer.

The shooter, however, was still actively murdering children. According to a timeline provided by McCraw, students made a series of 911 calls while the gunman was in the building. At 12:03 p.m., a student called 911 to whisper that she was in the classroom. She called again at 12:10 to report that multiple classmates were dead. At 12:13 she called the emergency line again, then did so again three minutes later, when she told the dispatcher that eight or nine of her classmates were still alive. At 12:19, another student called from a different classroom. On yet another call, two minutes later, the dispatcher heard three shots. At 12:36, there was still another call from inside the school, followed by another at 12:43, when a student asked for help from police. At 12:47, a child begged the dispatcher, “please send police now.” The gunman was killed by a SWAT team from Customs and Border Protection at 12:50 p.m.

The actions of police outside of the school during the time when the children were calling 911 can be seen in this video, which began streaming on Facebook Live at 11:54 a.m. and ran until 12:54 p.m. Inside the school, according to the new version of events presented by McCraw, the killer moved freely between two classrooms—not one—in which the callers hid. McCraw did not have an answer for why the information being received by the 911 operators was not conveyed to the incident commander, who, according to McCraw, ordered his nineteen officers on the scene, as well as the Border Patrol tactical team that had arrived by 12:10, to wait until more equipment and more officers arrived.

McCraw also amended Escalon’s account from Thursday of how long the shooter was outside of the building before he entered: now it was five minutes, not twelve. He also changed the story of how the shooter entered the building—rather than through an unlocked door, McCraw now said that a teacher had propped open the door through which the killer entered. Additionally, McCraw offered a new narrative about the school resource officer who he had claimed, two days earlier, exchanged gunfire with the shooter. In the story McCraw told on Friday, this officer did exist but was not on campus at the time the shooter entered. The officer allegedly drove back to the campus, drove past the shooter, and instead confronted a teacher he misidentified as the gunman.

For the first time, McCraw acknowledged that the choice not to send officers into the building during the more than forty minutes in which children called 911 while their classmates bled to death had been “the wrong decision.”

It’s unclear if the narratives advanced by law enforcement officials will continue to change in the days and weeks to come. Will there will be consequences for the officials who have offered false versions of the events, or for police commanders who ordered their officers to stand by while children were murdered? That too remains to be seen.

On the floor of the U.S. Senate on Friday afternoon, John Cornyn expressed his gratitude for the “unwavering courage” of the officers on the scene and referenced the “harrowing experience” they endured. It is unclear which version of events Cornyn was referring to.