Why are water thieves so hard to catch? 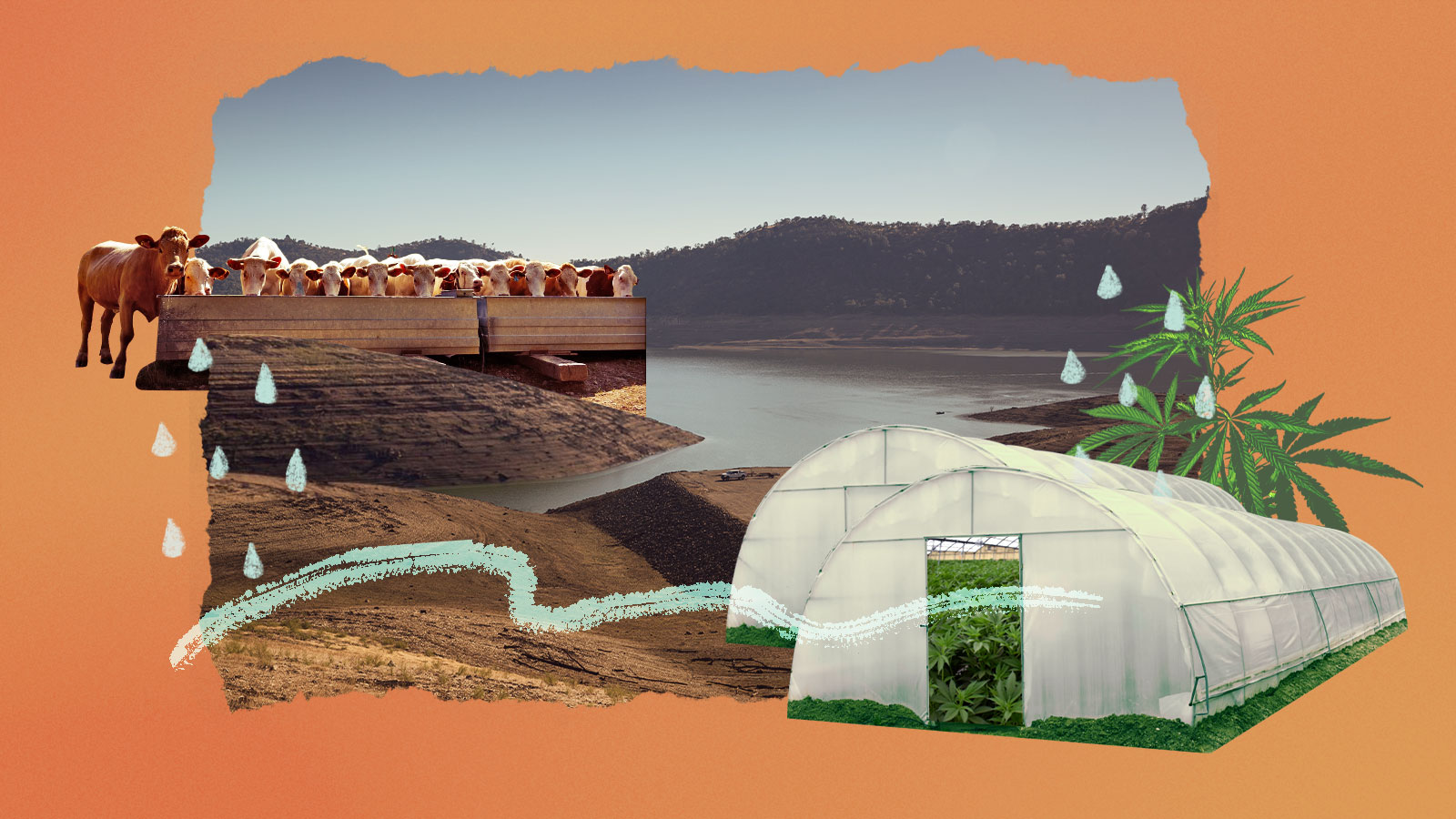 It’s not easy enforcing water regulations in the West. Just ask the officials in California who have been trying for almost a decade to penalize a man who took water from the river system that feeds San Francisco and bottled it for sale to stores like Starbucks.

It sounds like a tall tale, but it’s illustrative of just how hard it is to stop scofflaws from using water the rest of the state needs during a water crisis.

In 2015, at the height of a severe drought, California’s state water agency received a series of complaints about water theft on a small tributary of the Tuolumne River, the source of the Hetch Hetchy reservoir that supplies most of San Francisco’s water.

G. Scott Fahey, the owner of a water bottling company called Sugar Pine Spring Water, was siphoning water from the spring and loading it on trucks, the complainants said. Fahey’s company had been tapping the spring for more than a decade—he supplied water to a company named on Starbucks’s list of water bottle suppliers at the time—but the state had imposed drought restrictions on the Tuolumne that year, which barred Fahey from using it.

The state issued a cease-and-desist order to Fahey within weeks, and a few months later investigators began gathering information to prosecute him. It looked like a slam-dunk case. In the end, though, it would take the state more than six years to complete the prosecution—long enough for the 2015 drought to end and another drought to begin. During that time Fahey would appeal the state’s initial decision and sue the state for wrongful prosecution, dragging the case out for years in an effort to avoid paying $215,000 in damages.

In the fall of last year, just as the state was nearing the end of the prosecution, officials received another complaint about Fahey—according to the complainant, he was stealing water from the same river again, undeterred by the full force of California’s prosecution.

Across the West, major water users are subject to strict regulations that govern how and when they can draw water from rivers and streams. These rights vary from state to state, but the general principle is always the same: older water users have stronger rights than newer users, and the state has the authority to curtail water usage during drought periods. (Thanks to the colonial foundations of water law, tribal water rights date from the creation of tribal reservations, not from when a tribe started using a water source. In theory these rights are senior to those of private water users, but in practice many tribes face steep barriers to realizing these rights.)

But enforcing those rules is easier said than done. Over the past decade, as more states have clamped down on water usage, water managers across the west have found themselves struggling to monitor all potential violations, and to implement water rights law that they’ve never had to use before. Even a large and well-funded state like California can’t keep track of all illegal water diversions, and attorneys often have trouble prosecuting even those violations they do identify. Even when the state has an airtight case, its enforcement powers are limited, and the punishments it can mete out often aren’t severe enough to deter potential violators.

That means that many water users who violate drought restrictions may get off with just a slap on the wrist, if the state notices them at all. This makes it difficult or impossible to protect vulnerable waterways from being overtapped.

“Their capacity is minuscule compared to what they’re expected to do, and I think the water rights unit has been systematically underfunded from day one,” said Felicia Marcus, the former chair of California’s State Water Resources Control Board, also known as the “Water Board,” which regulates water in the state.

The first challenge the state faces is measuring water withdrawals in the first place. An investigation from the Sacramento Bee found that the state has just a thousand working water gauges to monitor almost 200,000 miles of river, and furthermore found that just 11 percent of water users comply with a 2015 law that requires them to report their water usage. Without an accurate sense of who’s using what, it’s hard to know where to look.

But the bigger problem for the Water Board is that its enforcement staff is too small to enforce even the portion of water violations that it does end up detecting. The Water Board’s enforcement division has only 50 permanent staff members, and just three are dedicated to enforcing water rights violations. The division receives hundreds of complaints a year, but it can only investigate a few of them, and only 10 percent of received complaints lead to any enforcement action.

Representatives for the Water Board argue this is in part because the department receives a high volume of repeat complaints, but also acknowledge that the state can’t investigate everything.

“Just like the IRS doesn’t audit every single taxpayer, we do not conduct a detailed enforcement investigation into tens of thousands of water rights,” said Ailene Voisin, a spokesperson for the Water Board. “We use our limited resources and our enforcement discretion to conduct investigations where circumstances warrant it.”

During drought periods, investigators focus on monitoring streams where the state has issued restrictions, but even then it’s difficult for them to check on more than a fraction of all the water users under restriction.

Still, some divisions have more resources than others. Of the fourteen cease-and-desist orders the state has issued since the last drought, seven were issued to cannabis growers. That’s because the cannabis enforcement unit has a bulkier budget, as well as five dedicated employees, compared to three for all other rights violations. When California voters approved a recreational marijuana referendum in 2016, the state government plowed extra funds into regulating the newly legal pot market. In fact, many of the water enforcement actions against producers result from unrelated drug busts against illegal grow operations.

Even when the state knows who’s breaking the rules, bringing offenders to heel can be difficult. That’s in large part because the state’s water rights system is large and multifaceted, and officials have never comprehensively quantified and sorted all the different kinds of rights in the state. This has made it difficult to enforce the letter of the law during drought periods.

The Fahey case was a textbook example. Investigators found Fahey had diverted about 25 acre-feet of water illegally—as much as 25 to 50 households use in a year, but not an enormous amount in the grand scheme of things. State officials managed to schedule a hearing date for Fahey within a few months of getting the first complaints. But thanks to the complexities of the water rights system, and the historical quirks of Fahey’s specific water rights, it took another three years for the administrative board to reach a decision ordering Fahey to pay the state back for his theft in the form of either water or cash. The facts of Fahey’s diversion were clear, but the complex nature of the water rights system made it difficult to arrive at a swift decision, and even after the decision came down, Fahey appealed for a reconsideration of his case. It took until March of this year for the board to refuse his request, again because of the legal complexities involved. Now Fahey is suing the state water board over its decision, which will lead to yet another trial, this one in civil court.

This process took so long that it may have allowed Fahey to violate the law again. In October of last year, the state received another complaint that Fahey was diverting it illegally. Records obtained by Grist show that a complainant said they “witnessed water trucks going and coming from [the] Sugar Pine facility.”

“Have been following his case through the water board,” the anonymous complainant wrote, “and last [I]looked, he had been ordered to cease and desist.”

In theory, state officials should have investigated the complaint, but Fahey was in the middle of petitioning for reconsideration, and the state couldn’t enforce its cease-and-desist order while his case was in legal limbo. State officials told Grist they decided not to investigate the new complaint against Fahey so as to avoid derailing the ongoing prosecution from the last drought. The state’s powers were so limited, and the enforcement process was so time-consuming, that the state couldn’t stop Fahey from violating drought restrictions, even after it had caught and prosecuted him for doing so. (Starbucks stopped sourcing spring water from California a few months after the case began. Fahey could not be reached for comment.)

“California, which prides itself on being ahead of other states on a lot of issues of climate change and water quality, is way behind when it comes to the water rights system,” said Marcus. “Having tried to implement it during that last drought, it’s very difficult to do. They don’t have enough staff to be able to manage a wieldy system, let alone an unwieldy system.”

The limitations of the state’s enforcement power were on display again this year during a conflict between ranchers and indigenous tribes over a vulnerable river in the northern part of the state.

This past summer, the Water Board imposed drought restrictions on the Shasta River, a winding mountain waterway near the Oregon border. The state has conflicting responsibilities on the Shasta: it must release some water from the river every summer to irrigate farms and ranches in nearby valleys, but it also has to hold back enough water in the mountains to protect vulnerable salmon populations. In drought times, the salmon are supposed to take priority.

This summer, the ranchers upset that balance. After the state imposed the curtailment on the Shasta, the irrigated fields in nearby valleys started to dry up, jeopardizing the health of crops and cattle. A group of ranchers decided to violate the order on purpose, and wrote a letter to the state announcing their intentions to start diverting water in violation of the curtailment. They turned on their spigots and drained water from the river, filling up the ponds and fields on their property. Within hours, the water level at the river’s main gauge had dropped precipitously, and it continued to drop over the coming days, throwing the survival of the salmon into jeopardy.

Leaders from the state-recognized Karuk tribe of Indigenous people, who are the stewards of the mountain salmon, pleaded with the state to intervene and stop the ranchers’ violation of water law. As with Fahey, the state issued a cease-and-desist order almost at once, but the order was toothless. For the first twenty days after an order is issued, the state can only impose fines of around $500 a day, which the ranchers were more than capable of paying. A few days after they turned on the water, the ranchers turned it off, claiming victory.

The case was emblematic of the shortcomings Marcus identifies. Even when there was clear evidence of wrongdoing, the state didn’t have a big enough “stick” to enforce the letter of the law. The Shasta case set a disturbing precedent for future drought years: if there’s no real punishment for violating water rights, why shouldn’t everyone just take what they want?

The ranchers seemed to understand this too.

“At $500 a day, it would probably be worth it, I’ll be quite honest,” one of the ranching association leaders told CalMatters in August when asked about potential fines from the violation. “It’d probably be more than affordable.”

A few months later, in November, the state hit the ranchers with a fine of $4000, or about $50 per rancher. It was the maximum allowable fine.