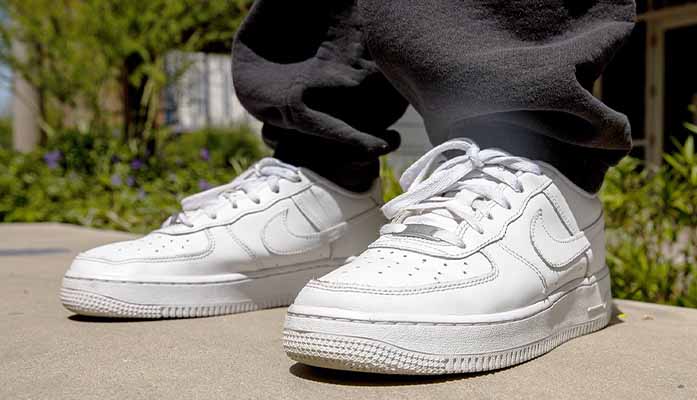 Many Worlds, a streetwear and shoe store in central Phoenix, caters to sneakerheads as well as those looking for a specific brand of athletic footwear. (Photo by Susan Wong/Cronkite News)

Sneakers long have lived at the intersection of sports and fashion. More than a hundred years have passed since Chuck Taylor struck his deal with Converse that changed the athlete-brand relationship forever.

In the mid-1980s, Michael Jordan’s collaboration with Nike to create the Air Jordan is largely considered revolutionary for shoe culture. Nike publicly paid the fines Jordan accrued for wearing his shoe during games, which violate team and NBA rules.

By being “Like Mike” and wearing the Jordan 1, sneaker lovers were fashionable while making a statement against authority. Basketball shoes became daily shoes. With Michael Jordan back in the news cycle after the 2020 release of “The Last Dance,” his long-awaited documentary, the Jumpman image had a resurgence.

A typical pair of Air Jordan 1 hightops goes for about $150 on Nike’s website.

“From 2018 to 2020, (we) saw the acceleration of ‘The Last Dance,’” sneaker journalist and expert Luis Torres said. “The Jordan boom recently, and some people having more money, (have) really flooded demand for more Jordans and Nikes.”

Air Force 1s have had a presence on the hardcourt since the early ’80s when Hall of Fame center Moses Malone debuted them for Nike. They have stood the test of time from a fashion perspective, with shoe companies and sneakerheads altering their products to mimic the sleek design.

“That’s what everybody (wanted), because it’s just such a clean look,” Torres said. “But now it’s kind of trendy among a younger demographic to … just wear them beat up. Like it’s kind of the trend to have your sneakers look like they’ve been run over a few times.” 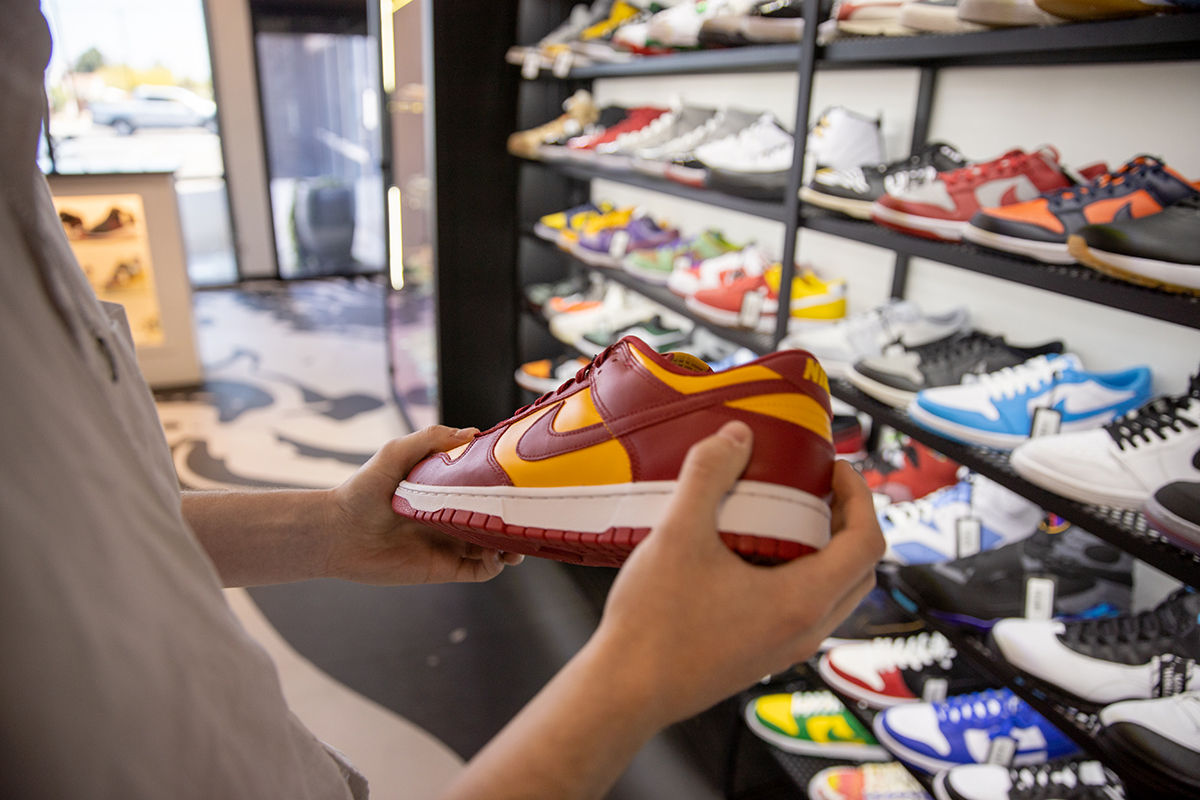 Sneakers have been at the intersection of sports and fashion for years, and they’re no longer just athletic wear. Even high-end designers are in the game now.

Despite their popularity, Air Force 1s and Jordans, or “Js,” are not allowed in many Scottsdale nightclubs. The rules are meant to establish a certain look or feel to the club, but Valley residents are confused as to why they should opt for cheaper attire when the rest of the dress code implies a higher-end image.

Noah Jones, 23, said he was wearing a pair of tan Air Force 1s the first time bouncers at Casa Amigos denied him entry. Jones had worn Yeezy sneakers, which is Kanye West’s fashion and sneaker collaboration, into the club on a previous occasion, so he was confused why his more subtle AF1s caused so much trouble.

The bouncers told him that these rules were in place to prevent fights, as patrons in the past have been aggressively protective of their high-end sneakers, which have led to confrontations.

“I could see how it could happen, but I haven’t personally witnessed that happen,” Jones said. “And then, also, it wouldn’t really explain them denying me with my Air Force 1s because that’s just not a shoe that people are getting worked up over.”

Brandon Jones, 22 – no relation to Noah – also was wearing Air Force 1s when HiFi Kitchen and Cocktails refused him entry. He received a similar explanation.

“That would only be a concern to me if somebody looked like they were wearing some brand new shoes, or specifically Jordans,” Jones said. “Ninety-dollar Air Force 1s should not be starting any type of fights. In fact, there are more expensive shoes that they let people wear into the club than Air Force 1s.”

The rules themselves raise questions, but the inconsistencies in the enforcement of these rules are confusing for some clubbers. Although the dress codes come from management, it appears enforcement is left to the bouncers, and it’s fairly arbitrary.

Sarah Kurtze, 21, frequents Scottsdale nightclubs, including Casa Amigos, on weekends. She has never had an issue wearing her white Air Force 1s.

“They’re, like, my shoes (that) I don’t care what happens to them,” Kurtze said. “And my feet get stepped on at the clubs a lot, and so I would rather not wear nice shoes because I don’t want them to get ruined.”

Justin Tinsley, a senior culture writer for Andscape, formerly The Undefeated, tweeted in April that a Scottsdale bar wouldn’t let his friend in because he was wearing Jordan 1s: “A sports bar. That’s showing the UNC game. That’s the definition of irony.”

On request, one security guard at Casa Amigos provided Cronkite News with the club’s nighttime dress code: pants with a belt, no open toe shoes, no face tattoos, no gang-affiliated merchandise, no sports gear and no Jordans. Air Force 1s were not mentioned.

HiFi Kitchen and Cocktails also did not respond to repeated requests for comment.

As a bouncer at Hifi and Casa Amigos, Baines, 26, regularly removed patrons from the lines because of their sneakers. He has since chosen to work security for establishments farther west and closer to Phoenix.

Baines, who is Black, doesn’t believe the sneaker bans are meant to prevent brawls.

“That’s something they say,” he said. “But at the end of the day, it’s not the reason why.

“From my experience and, you know, what I’ve seen and from both sides, just, you know, from partying and working, is it’s really more to keep a certain crowd out. Because you know, if you had 10 people in line with (Jordans) on, eight of the 10 people probably are going to be Black.”

Although some say these rules could be racially motivated, others point to class distinctions in the demographics of Old Town clubs. Baines also said it’s common for bouncers to accept cash at the door to allow patrons to skip the line, reserve a table or order bottle service.

In Scottsdale, a $20 bill also can act as a get-out-of-jail-free card for partygoers who forgot to leave their J’s at home, he said.

“You can wear whatever … you want, as long as you want to pay for it,” Baines said.

For some, coughing up the cash is worth keeping plans intact, but not everyone has the means to do so. Hope Denslow, 26, decided that she won’t return to Old Town nightclubs after several denied entry to her boyfriend, who is Black, because of his Jordans.

“We’ve just decided to start going to their clubs in downtown Phoenix or we just go to … dive bars further in South Scottsdale,” she said. “Why waste, you know, $14 on a drink for some people that don’t want those kinds of people in? We work hard for our money. Why would I spend $15 at a club that doesn’t want my boyfriend there.”

Torres, the sneaker journalist, thinks there’s a disconnect between club managers and the culture and lifestyle they promote. Fashion trends come and go, he said, and sneakers are no different. Five years ago, designer brands like Balenciaga and Versace made a splash with sneakers, promoting them through social media and song lyrics.

Now, retro-style basketball shoes are back at the forefront, but the designer phase could be making a comeback, he said.

“Dior, Givenchy, Prada, you’re seeing all these high-level brands collaborating with sneakers,” Torres said. “So I think, maybe in five years we’ll have a reset to some degree, where a nightclub might be more accepting of (retro shoes).”

Sneakerheads are pleading for transparency.

“I don’t know what their end goal is, and why they continue to be inconsistent with the rules,” Noah Jones said. “But I do know it’s backfiring because a lot of my friends who frequented Old Town are not going anymore.”

As Baines said, these rules are nothing new for most Valley residents who enjoy nightlife. They just know that when the beat hits their feet, it’s time to check their shoes. 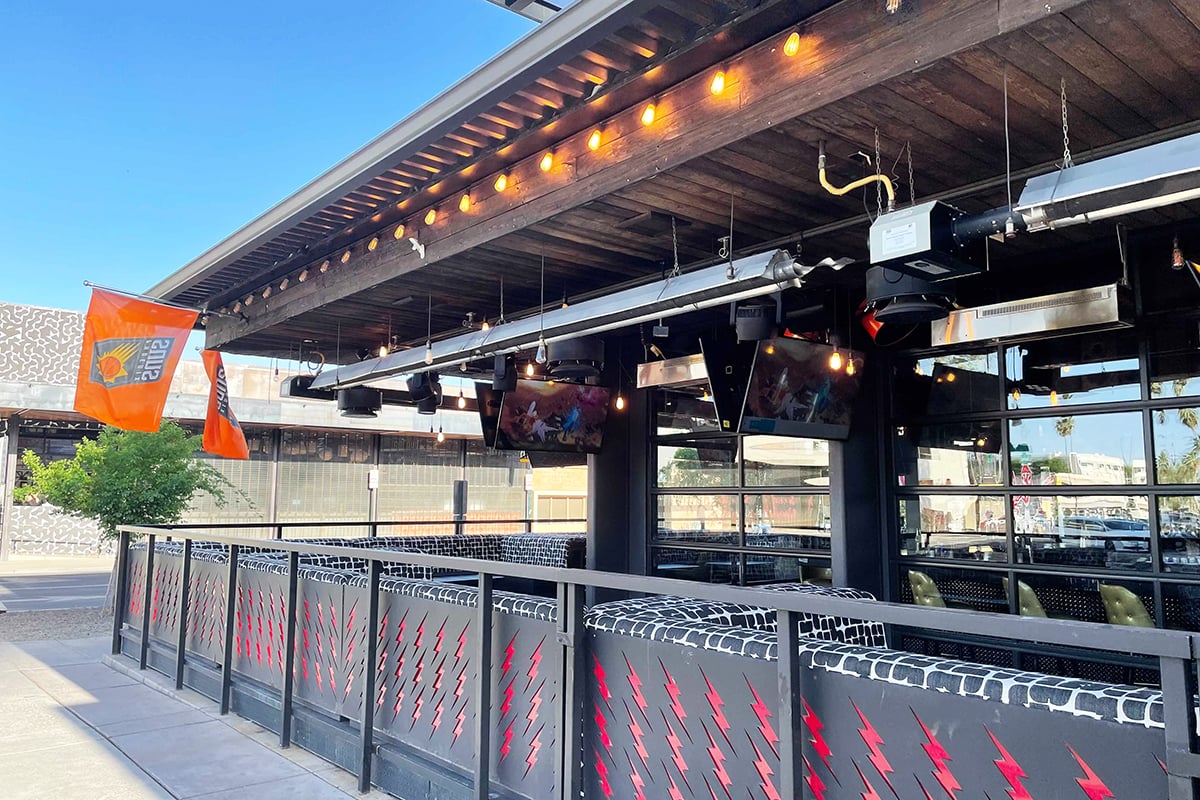 Scottsdale nightclubs are sending mixed signals about dress codes, patrons say, and they believe the rules are arbitrary and discriminatory. (Photo by Kevin Redfern/Cronkite News)