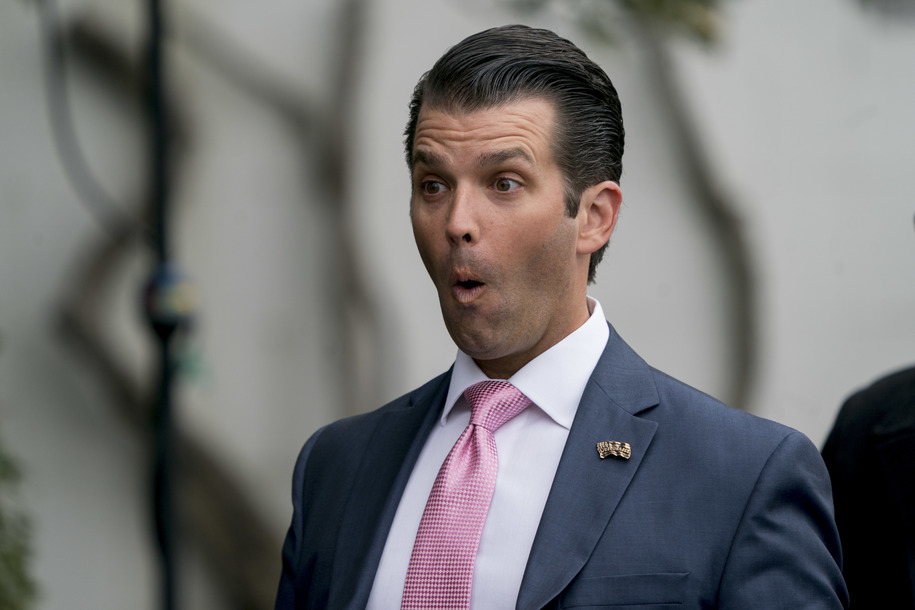 Appearing on this week’s episode of the “UnPresidented” podcast, Trump, a psychologist who has written a highly-critical book about former President Donald Trump, referred to her cousin Donald Trump Jr. as “weak” and “the stupidest one” in her family.

“Donnie is a deeply unintelligent person. I’ve been asked this, who’s the stupidest one, and it’s him,” Mary Trump said.

“He has no core. He has no ideology,” Trump added, before saying her cousin has an ability to “out-racism anybody, he’ll out-misogyny anybody, he’ll shoot as many innocent animals as possible to get whatever passes for affection in my family.”

Of course, as a layman with no connection to the Trump family—other than the Svengali-like hold they have on my vomit reflex—I have to say I agree. I don’t know if he mistook Ajax for cocaine at some point, but the dude’s not all there.

Sure, he’s “written” two collections of words called “books,” but any dumbass can do that. If I were writing for Junior’s audience, I could pretty much fart into Google Translate for 10 minutes and be done with it. And if it turns out I’m not that ambitious, I could simply hire a ghost-farter, then just sit back and watch the royalty checks roll in.

In fact, according to his cousin, sitting back was always Junior’s life plan, even though his sister is his father’s favorite son.

“He had no intention of striking out on his own. He had no intention of doing anything but sucking up and toeing the line, and the problem is — one of the problems is — and who knows how this happens — but kind of the same problem that happened to him happened to my dad. My grandfather, for whatever reason, didn’t like my father and saw something in his sibling Donald, and the only thing that’s weird is that Donald did the same thing but with Ivanka.”

In honor of his “Stupidest Trump” award from Cousin Mary, let’s review some of Junior’s greatest hits, shall we?

There was the time he compared Syrian refugees to Skittles. That was a classic. And remember when he urged his followers—twice—to get out and vote for a Republican gubernatorial candidate the day after the election?

And then there are the tweets where his stupidity folded into his awfulness like a fluffy omelet.

Can I pretend to be? @clayaiken: Eric Don’t be jealous that gay guys get to stick our hands up women’s shirts like that with no issue!

And the time he excoriated a fellow tweeter’s bad grammar with an ungrammatical tweet of his own:

And, of course, there was the infamous Trump Tower meeting, which Don Jr. helped set up to extract information from foreign operatives about his dad’s political opponent. In this case, Junior’s gormlessness was a double-edged sword. He was dumb enough to eagerly solicit dirt on Hillary Clinton, but apparently too stupid to realize he was breaking the law.

This is far from a comprehensive list, believe me. Feel free to add your favorite Junior moments in the comments.

Mary Trump is proof that genetics don’t necessarily determine our destiny. A shit-for-brains parent is necessary to help one along the sort of path that Don Jr. is blithely traversing. Either that or a Tony Montana-worthy berm of premium coke.

Or, you know, maybe both.

It made comedian Sarah Silverman say, “THIS IS FUCKING BRILLIANT,” and prompted author Stephen King to shout “Pulitzer Prize!!!” (on Twitter, that is). What is it? The viral letter that launched four hilarious Trump-trolling books. Get them all, including the finale, Goodbye, Asshat: 101 Farewell Letters to Donald Trump, at this link. Or, if you prefer a test drive, you can download the epilogue to Goodbye, Asshat for the low, low price of FREE.