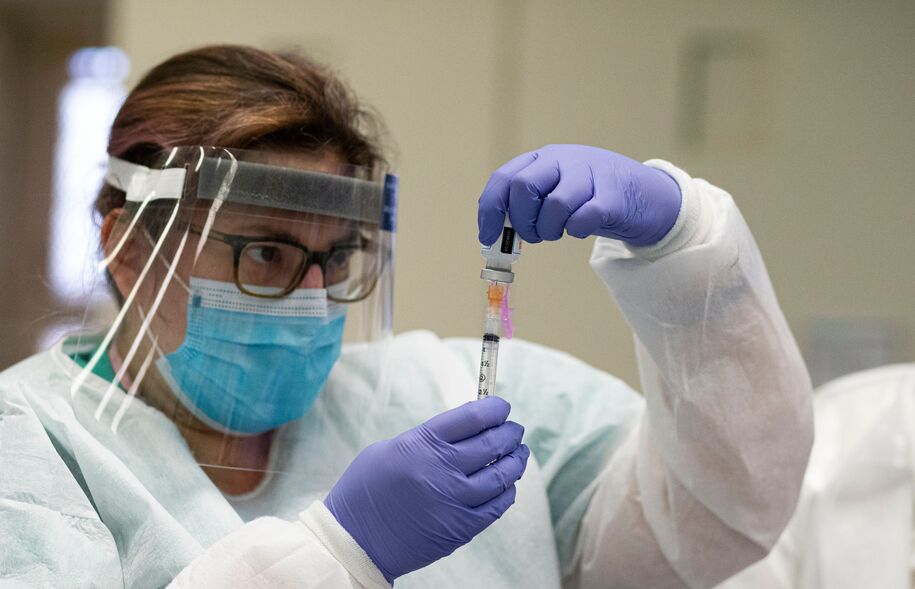 This, of course, is not a problem limited to just New York City. An Associated Press analysis released Saturday found that, across the 17 states that have released vaccination data with racial demographics, that white people are getting vaccinated at far higher rates than Black, Hispanic, and Native American people. CNN’s analysis spanned 14 states and found white people were getting vaccinated at twice the rate of Black and Hispanic people. Neither analysis included New York.

In Washington Heights, which was particularly hard-hit by the virus, 69% of the population speaks Spanish. Josefa Velasquez, a Spanish-speaking reporter for THE CITY, was asked by site workers to interpret for Spanish speakers seeking the vaccine because there was nobody else who could. Of the 12 people she spoke to, only two were from New York City. One of them, Olga, needed Velasquez to translate on the first of two trips.

One guide explained that Olga needed an appointment to enter the facility. Olga had tried calling time and time again but “the process is difficult for older people,” she said.

She asked the guide, via THE CITY: Is there someone inside I could speak to who could help?

No, she’d have to make the appointment first, he replied, pointing at a number written on the top right corner of a document with vaccine appointment information.

“This is why people don’t get vaccinated,” an exasperated Olga said. “It’s too hard.”

“It’s like The Hunger Games,” said New York City Councilman Mark Levine in an interview with CNN, referencing the wildly popular post-apocalyptic book and film series, where an entire nation encourages children to kill each other on live television so that their neighbors can eat; success in the Hunger Games arena is largely dependent on the resources a community can provide their combatants. “People who don’t have a computer, don’t have good internet, aren’t comfortable with technology, maybe have limited English language skills, they are not getting through. And that’s reflected in who is showing up at these sites,” Levine explained.

And who was getting vaccinated at the Washington Heights Armory? As the bottom-feeding local tabloid The New York Post found, these folks weren’t the best humans of New York.

“This is New York City and, to me, you give it to everyone who needs it. The people here can get on the computer just like everyone else,” said Judy Stevens of the Upper West Side. The Post noted that Stevens’ daughter actually was the one who “scored” the white 76-year-old her vaccine appointment.

An Upper East Side woman vaccinated at the Armory told The Post that she’d been trying to get the needle for nearly two months, lamenting how “crazy” the process was.

Carol, who declined to give her last name, and her husband — who declined to be identified at all — were picked up after their appointment by a black Cadillac limousine, their driver waiting with their small dog in tow.

“You have to fight for it,” said Carol’s husband with a laugh, when asked if he felt the vaccine was being distributed fairly.

But who are they fighting?

THE CITY interviewed people who had driven down from Westchester to get the vaccine out of impatience; Ann and Dennis already had standing appointments close to home, but didn’t want to wait, so they trekked 26 miles to Washington Heights instead, seemingly oblivious to the fact that local residents aren’t likely to be able to do the reverse.

And that’s the problem, really, with the rollout so far (supply issues aside). Zip code analysis from major cities like Chicago, Los Angeles, and Miami show that the vaccines are being disproportionately distributed in whiter, wealthier parts of town. But even when poorer folks get a chance, and even as vaccine hesitancy among people of color is lessening, the Armory fiasco shows that whiter, wealthier people are showing up to get it, and nobody’s stopping them.

The Armory vaccine site was lauded in a city where Black and Hispanic people are twice as likely to die from COVID-19 than white people. “The COVID pandemic has highlighted pre-existing inequity in our society and our healthcare system,” announced Gov. Andrew Cuomo. “And as we fight against this virus, we also have to fight back against those forces of inequality.”

What the state and the city seemed to ignore was the fact that the greatest “force of inequality” is always those who benefit most from it.

Once the greed of those living outside of Washington Heights, and those living outside Manhattan itself was exposed, New York—the city and the state—scrambled to find solutions. By the time THE CITY story was being reported, a Spanish-language online portal and hotline had already been established, but less than 24 hours after its publication, de Blasio acknowledged that wasn’t enough.

“The whole idea of a successful vaccination effort must be community-based,” he said. “And community people have to see those sites are really for them, and they’re not being somehow left out of sites in their own community. So this needs to be fixed right away.”

On the citywide level, de Blasio acknowledged that both public and private hospitals could be doing a better job of ensuring that paperwork and appointments related to the vaccination process were available in languages beyond English and Spanish.

“It’s a huge, sprawling effort, but we’ve got to make sure it’s as inclusive as possible,” said de Blasio, pressed on whether the city could compel private facilities to offer materials in other languages commonly spoken throughout the city, including Chinese, French, Creole and Russian.

de Blasio also conceded that vaccine hesitancy wasn’t the greatest barrier to vaccination for Washington Heights residents. “There’s plenty of people who want the vaccine in the community. That’s who the opportunity should be focused on,” he admitted. Cuomo, up in Albany, acknowledged that vaccine chasers were driving as far as “100 miles to … get a vaccine” before suggesting that targeting distribution to the hardest hit areas might be a future strategy for the Empire State.

Community organizers are demanding to be involved in the revised strategy.

Community groups in Washington Heights say they need to be involved in all distribution efforts if health care leaders want to reach people of color. Jon-Paul Dyson, program director of Community League of the Heights, or CLOTH, said many residents don’t have Wi-fi or email access so they rely on word of mouth, literature in the mail or their social service providers to get information.

Dyson said he is working with the health care community to help get residents vaccinated.

“Education is the biggest piece that’s missing right now,” Dyson said Thursday. “The locations of where to go, the transportation for our seniors to get there, all of the above.”

For now, the Armory is now vaccinating only residents of the five boroughs; 60% of all shots have to go into arms attached to neighborhood residents, who don’t need a limousine to sweep them away once they get jabbed.