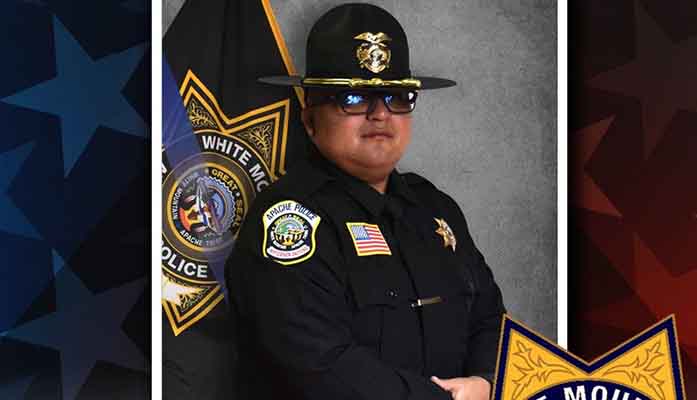 A White Mountain Apache Police Department officer is dead and another officer is wounded after a  shoot out with a criminal.

According to the Navajo County Sheriff’s Office, Officer Adrian Lopez, Sr., stopped a vehicle driven by Kevin Dwight Nashio on E. Fork Rd. in White River Arizona. An altercation occurred between Officer Lopez and Nashio. During the altercation Officer Lopez was shot.

Nashio took the officer’s vehicle with White Mountain Apache Police officers in pursuit through very remote areas of the Fort Apache Indian reservation to the Holly Lake area where officers and the suspect were involved in a gun battle. One officer was shot during the gun battle of the suspect was killed.

The officer was transported via air ambulance to the Phoenix area hospital for treatment.

The White Mountain Apache Tribe released a statement saying that “was indebted to our police department and EMS for their prompt and courageous response, and grateful for the assistance rendered by our neighboring jurisdictions. Our prayers, tonight are with the families of those officers involved, and with all of our first responders.”