While DeJoy was gloating ‘Get used to me’ in hearing, Biden was engineering his ouster 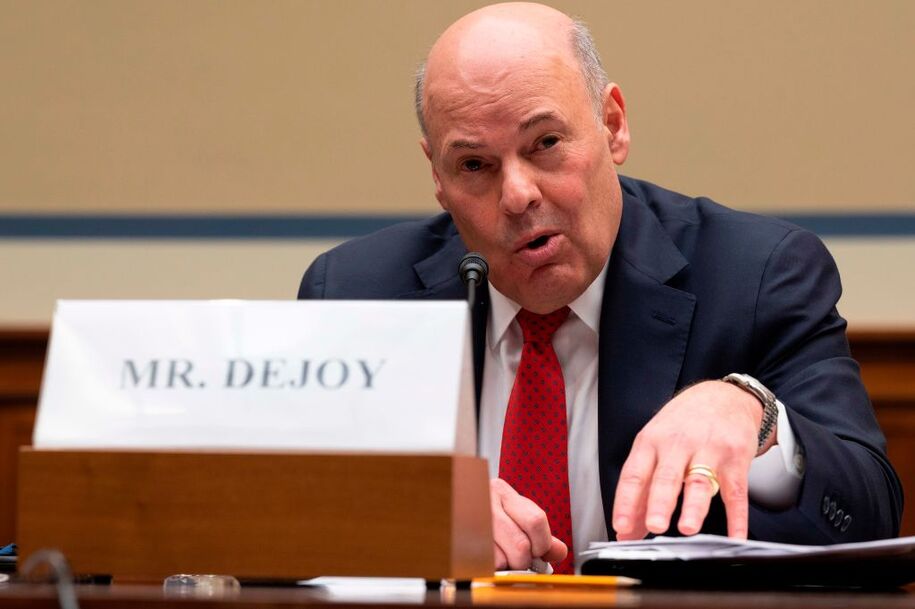 “Far too many constituents across the Chicago region have gone days and sometimes weeks without mail,” Rep. Marie Newman, a Democrat, told the local ABC affiliate. “Our residents rely on postal mail to receive their medicine, bills, tax refunds, and essential documents but these delivery delays and customer service issues are causing them to lose faith in one of America’s most trusted and respected institutions. Our seniors are falling behind on their prescriptions and essential services are being shut off because bills were not delivered on time—this is unacceptable.” That’s the message Democratic lawmakers tried to make break through with DeJoy Wednesday, to little effect. “You can sit here and think I’m bringing all this damage to the Postal Service,” he told Rep. Jamie Raskin, but “the place was operationally faulty because of lack of investment and lack of ability to move forward, which is what we’re trying to do.”

What he’s trying to do is is further slow the mail and make it cost more. That includes ending one- and two-day delivery for local first class mail and hiking postage rates, a plan that is being panned pretty much everywhere. One analyst spoke to NPR, saying that “degrading” first class mail is a terrible ideal. Paul Steidler, a senior fellow at the Lexington Institute, said, “You shouldn’t even call it first-class mail if it takes three days for something to get a short distance.” He added: “There’s going to be greater instances of court notices not being received on time, payments to credit card companies not getting in on time and penalties being assessed … and it’s completely unnecessary.”

Michael Plunkett, president of PostCom, a trade association for large mailers, said DeJoy’s rate hikes can’t be justified. “Customers of the Postal Service have been experiencing the worst service in decades in the last couple of months,” he told NPR. “It seems to me to be shortsighted and perhaps imprudent to plan on a large price increase in the middle of a pretty significant economic recession when your customers are extremely dissatisfied with the level of service they’ve been experiencing.” It is both imprudent and shortsighted if you’re trying to make the USPS function to the best of its ability. It makes perfect sense if you’re trying to destroy the service so that private competitors can swoop in and finally kill it off.

Biden’s nominees are unlikely to allow that to happen. Stroman left his position as Deputy Postmaster General last year specifically because of DeJoy’s hiring. “It was certainly clear to me that when they hired Louis DeJoy, the board of governors [was] going in a completely different direction, and looking to bring someone in whose philosophy and approach, I think, to managing the Postal Service was probably inconsistent with my own philosophy,” he told NPR. “So after having considered that, I made a decision it was time for me to leave the Postal Service.” He continued that “it seemed likely that there were going to be significant reductions in the Postal Service and possibly a move closer to more of a private-sector approach to the Postal Service, one which de-emphasized, I think, the overall mission of the Postal Service.” Last August, Stroman blasted DeJoy and his supposed reforms of the USPS on MSNBC. “The postmaster general specifically said, ‘Leave mail behind.’ That’s not an unintended consequence. That is a deliberate delay of the mail.”

So there’s a potential new governor who is not likely to endorse DeJoy’s sticking around. The other nominees aren’t too likely to lend DeJoy any support, either. McReynolds, the chief executive of the National Vote at Home Institute (NVHI), made it clear that she is unaffiliated politically, as a voting rights advocate probably should do in public. But her nonpartisan, nonprofit organization’s sole focus is “making sure every American can vote in secure, safe, accessible, and equitable elections by expanding vote-at-home systems in all 50 states.” Before founding the NVHI, she served as Denver’s director of elections from 2011 to 2018, and implemented a fully vote-by-mail elections system for the city. Hajjar, a labor and employment attorney, brings representation for postal workers into the mix, having served as general counsel to the American Postal Workers Union.

There’s one more slot Biden needs to fill. Current USPS Board Chair Ron Bloom, a Democrat, is serving in a one-year holdover term as his approved term technically expired. With Bloom, these three nominees and the other Democrat on the board, Donald Lee Moak, the majority of votes to fire DeJoy would be there without Biden firing anyone on the board and starting over from scratch. He should do that since the Republican members are there solely because they are cronies of Sen. Mitch McConnell and big-time donors to the Republican Party and to Trump. Between the two of them, McConnell and Trump turned the USPS into another arm of the GOP, and it’s only by the grace and intervention of the hero U.S. District Judge Emmet Sullivan that they weren’t able to stop the USPS from delivering mail-in ballots in November’s election.

The nominations Biden made do one big thing: They change the structure of the board. That’s something pointed out in Wednesday’s hearing. “Do you see it as a problem that the board of governors of the United States Postal Service looks like a millionaire White boys’ club?” Democratic Rep. Cori Bush asked DeJoy, noting that “more than 35 percent of postal workers are people of color.” There will at least now be two people of color on the board—Stroman and Hajjar—and a woman.

“These experienced and tested leaders will ensure the USPS is running at the highest of service standards and that it can effectively and efficiently serve all communities in our country,” the White House said in announcing the nominees. That’s only going to happen with DeJoy booted out of the top job.

U.S. child care system is heading for catastrophe, and the economic damage could be widespread