What we’ve learned from first 5 practices 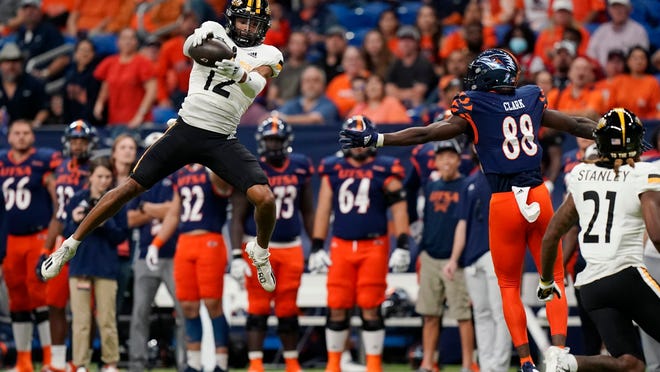 Southern Miss football is through its first five preseason practices as Will Hall gears up for his second season at the helm of the program.

After last season’s results, it’s likely no surprise for Southern Miss fans to hear that the defense holds the edge on the offense through five preseason practices.

The Golden Eagles’ front seven has looked solid, with a firm anchor at the back of the defense in the form of a highly experienced secondary.

But the offense has started to make some progress. Hall described Tuesday’s session as the best practice the Golden Eagles have had with their pass protection since his arrival before last season.

Continuing that trajectory will be vital for new offensive line coach and offensive coordinator Sam Gregg as he looks to turn around one of the nation’s worst offensive lines from a season ago.

STATE OF THE PROGRAM:Why talent is the biggest difference for Southern Miss football in Will Hall’s second year

The Hernando High School product has mostly been working with the third team, though he did step in to take some reps with the second unit during Sunday’s practice.

Certainly, talent is only part of what it takes to be a good college quarterback, with the mental strain of the position holding as much – if not more – importance. But it’s already clear that Wilcke has a solid foundation from which to build.

If you need a lesson in Football 101, spend some time hovering around the Southern Miss defensive backs.

The Golden Eagles secondary spends the time between sessions transacting on a marketplace of ideas – throwing out pointers, asking for feedback, dissecting each rep.

Such is the benefit of returning such a wealth of experience with players like Natrone Brooks, Eric Scott and Malik Shorts.

“I think that’s one of the strengths of our team,” Hall said.

4. The Southern Miss WR room holds a pair of players looking to make a move

Hall has said he believes wide receiver Jakarius Caston could be the Golden Eagles’ breakout player in 2022.

Caston’s preseason performance has backed that up as he looks to build on a 2021 season in which he caught 16 passes for 239 yards with a score.

Southern Miss fans should keep an eye out for freshman wide receiver Tiaquelin Mims, too.

Mims’ athleticism jumps out just about every time he touches the ball, and wide receivers coach Desmond Lindsey singled him out as the new arrival that has impressed him the most.

5. The Golden Eagles are dealing with some short-term injuries

Hall said Cavallo got “banged up” and will return before long. Baker might be out a bit longer, Hall said, with a lower extremity injury.

“It’s not season- threatening or anything,” Hall said.

The Golden Eagles are also waiting for transfer offensive lineman Calvin McMillian to get the green light for contact drills. He is dealing with a hand injury.