What to see, do and hear: “Lizzie” rocks, “West Side Story,” Blue Man Group, more 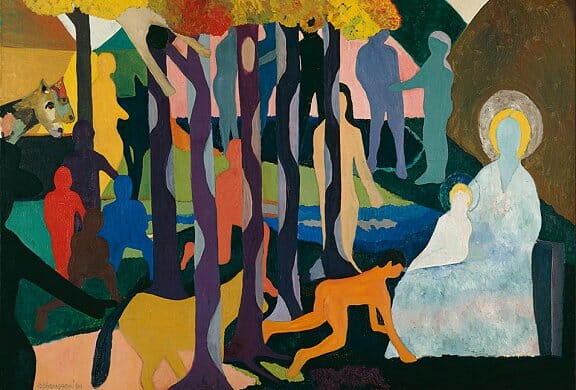 The Bob Thompson exhibit at the High Museum of Art, This House is Mine, is “like walking through an explosion of color and psychic energy, followed by a tantalizing sense of déjà vu” writes ArtsATL art critic Catherine Fox. Thompson, who died in 1966 just shy of his 29th birthday, was a prolific artist who borrowed from art movements of the past but understood that love and sex, brutality and revelry are universal human experiences that transcend history and time. This is the first major survey of his work in more than two decades. Through September 11.

Gallery 378 occupies an unassuming building around the corner from the Flying Biscuit in Candler Park. The current group show, Coterie, gathers the work of six women artists – Lauren Betty, Linda Mitchell, Eleanor Neal, Marienelly Piñango, Corrina Sephora and Susan Ker-Seymer. They came together over time to form a critique group while working out of their studios in the Goat Farm Arts Center. Now they are sharing an exhibit. Through July 30. Opening event Friday 6-9 p.m. with music by Jeff Mark Diamond and Friends.

Atlanta’s Tony Hightower, who moves effortlessly from soul to blues to jazz, celebrates the release of his second album — Legacy — with four performances at The Velvet Note in Alpharetta on Friday and Saturday. Hightower grew up in Atlanta and was a member of the Neo Soul group 4.0. But one of his stated goals was “one day I’m going to make a record like Nat King Cole and perform in a tux holding a brandy snifter.” Hightower will perform both nights at 7:30 p.m. and 9:30 p.m. Tickets are $39.

The Highlands-Cashiers Chamber Music Festival is back for its 41st year with a line-up that includes a lot of familiar Atlanta names (David Coucheron, Julie Coucheron, Charae Krueger and the Vega Quartet among others) plus groups with international followings such as The Ulysses String Quartet and The Gryphon Trio. Emory University’s William Ransom is the artistic director of the annual concert series in the mountains of North Carolina. It runs through August 7. Ticket prices vary.

If you’re like a lot of Broadway musicals lovers, you’re still sad that Stephen Sondheim is gone. But what a songbook he left us. One of his earliest and greatest achievements, West Side Story, opens Friday at City Springs Theatre Company. When the musical premiered in 1957, Sondheim was just 27; it marked his first foray on a Broadway stage. His mentor Oscar Hammerstein had convinced him to debut as the show’s lyricist and he was the junior member of a creative team for the ages: composer Leonard Bernstein, director and choreographer Jerome Robbins and playwright Arthur Laurents. Together they created the innovative musical transposing the framework and action of Shakespeare’s Romeo and Juliet to 1950s New York City, substituting warring street gangs for the lovers’ feuding families. Through July 24.

As with so many other touring acts, the Blue Man Group was quieted for a spell because of the pandemic. The perpetually touring trios of already-wordless improv comedians came off the road as a safety precaution. But now the chrome-domed performers are back, with one of the Blue groups returning to the Fox Theatre for four shows Friday through Sunday on a tour carrying the clever slogan “Still Blue. The Rest is New.” Yes, Blue Man Group writers have been hard at work in the lab, but each show is different regardless of the outline. To be sure, the comics remain — as the title of this tour goes —  Speechless. But even sans words, mischief and music and artful absurdity will be the language spoken.

You know the morbid rhyme: “Lizzie Borden took an axe and gave her mother 40 whacks. When she saw what she had done, she gave her father 41.” “Or did she?” asks Actor’s Express, which opens the rock musical Lizzie at Oglethorpe University’s Conant Performing Arts Center on Saturday. The show speculates on the motivations Lizzie (Jasmine Renee Ellis) may have had in late summer 1892: loss of inheritance, history of sexual abuse, oppression and madness. By her side is her older sister Emma, maid Bridget and neighbor Alice. Directed by Jennifer Alice Acker, the four form the band that sets Lizzie’s plight to a rock ‘n’ roll score (the cast is joined onstage by a band of five). Through July 24.

Atlanta author Vanessa Riley will discuss her new novel, Sister Mother Warrior, on Tuesday at 7 p.m. at the Atlanta History Center as part of their Author Talks series. Riley’s new book is set during the Haitian Revolution and is based the stories of two real-life women: Marie-Claire Bonheur, the first Empress of Haiti, and Gran Toya, a West African-born warrior who helped lead the rebellion that drove the French out of the country and freed the enslaved people of Haiti. Riley is also the author of Island Queen. Tickets start at $5.

It’s always hard to know how to categorize glo these days. Is it a dance company? Not really, although that’s how it began. Is it a community organization? Yes, if making masks during the pandemic and providing play kits for kids counts. A presenter? Yes, if you include its residency earlier year this at West End’s Gallery 992. A florist? Yes, if decorating the Atlanta Symphony stage with 900 flowers counts. A nonprofit dedicated to the regenerative power of nature? Yes, if broadcasting wildflower seeds around the city and environs counts. That’s what the company will be doing in Community Sowing #3 on Sunday from 5-8 p.m. at 17th and West Peachtree Street in Midtown. It’s part of glo’s lost loose and love project that runs through December. Kombucha and mangos will be served.