What to see, do and hear: A.I.M., Fringe Fest, Mike Luckovich, Kwame Onwuachi 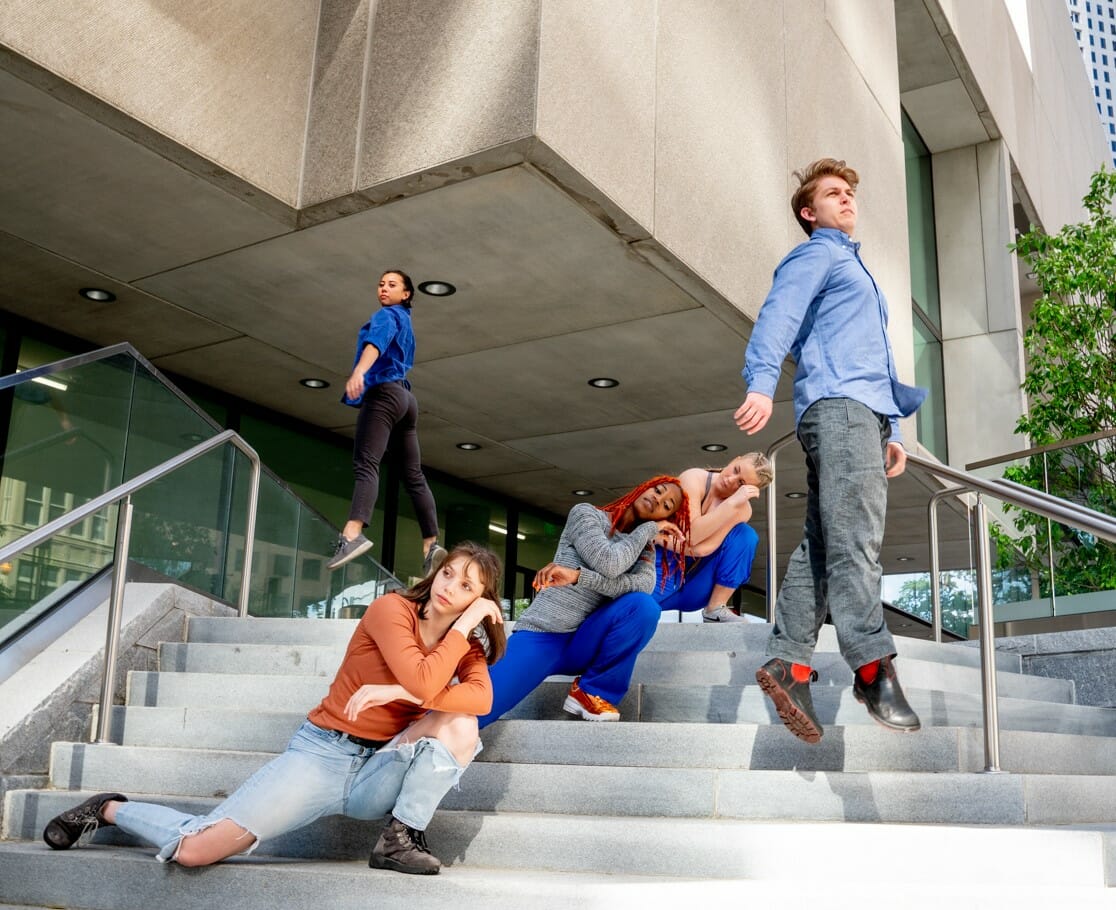 Bautanz Dance presents its first downtown site-specific work Arches and Textures DWTN at 8 p.m. Friday. To be performed at Underground Atlanta’s Fountains Plaza, the piece is inspired by the architecture and history of the Central Library, which recently reopened. Music by Xay Zoleil who will also present VIAUNI, a new dance company under his direction. Free.

It’s too bad that Terminus Modern Ballet Theatre and Kyle Abraham’s A.I.M. are performing on the same night, Saturday. each for one night only. Both are good choices, if very different in tone. Terminus’ Everything is Waiting (above) was first performed in March 2019 at the Off the EDGE festival. Choreographer Tara Lee has reworked and expanded it for this performance at Stillwell Theater at Kennesaw State University. It still expresses the joy that awaits if we can transcend the anxiety and perpetual discontent of contemporary existence. The work promises to be all the more relevant in light of the pandemic. 8 p.m.  $35. Students $15.

“It’s a Black love sitcom.” That’s how Catherine Kirk, a dancer with Kyle Abraham’s New York company A.I.M., described An Untitled Love in a recent New York Times interview. Unlike some of Abraham’s earlier, darker works, this full-evening contemporary ballet exudes joy, flirting, community and girls sitting on the couch talking about ashy ankles. Being performed Saturday at Rialto Center for the Arts, it’s set to music by Grammy-winning R&B legend D’Angelo and is a nod to his hit single “Untitled (How Does It Feel).” Abraham hasn’t forgotten his social justice conscience, however, and there are some darker moments as well. Read ArtsATL’s preview HERE. 8 p.m. Tickets start at $39.10.

Twenty different edgy and entertaining hourlong shows will be staged at 7 Stages, Neighborhood Church and Wrecking Bar beginning Thursday as Atlanta Fringe Festival moves into the heart of its schedule. The first in-person fest since 2019 due to the pandemic, this year’s edition includes solo storytellers, dancers, a folk singer and a traveling circus. “The best part about Fringe is, like, running around Little Five for a weekend and potentially seeing the most vulnerable, beautiful, cut-your-heart-out stuff you’ve ever seen,” writer-performer Dani Herd said in ArtsATL’s preview story.  Through Sunday.

Aurora Theatre isn’t being bashful about its ambitions for its season finale: It wants to send the comedy Swindlers, opening Thursday, to the Great White Way. Aurora is collaborating with Broadway Factor, whose partners claim a track record for hit musicals including Mrs. Doubtfire and Kinky Boots as well as the acclaimed revival of Frankie and Johnny in the Clair de Lune. “They have treated Swindlers wonderfully,” said William Fernandez, Broadway Factor’s founding producer. “They are a true testament that top notch work is being done outside New York.” The farce by first-time playwright Chris Anthony Ferrer is about a pair of bungling burglars whose plans to make easy pickings of a Miami mansion and a $300 million diamond go way wrong. Through June 5.

The Artificial Island, opening Friday at PushPush Arts in College Park, is described as a fun mix of Being John Malkovich and The Simpsons, which sounds both cosmic and comic. Written by Atlanta musician Jeffrey Butzer, the comedy unspools the story of Penny, who is not doing great at adulting. In the middle of her 25th birthday party, she escapes from her bar-hopping buddies to a fortune teller’s place, where Penny doesn’t like the picture the reading paints of her future. Soon she finds herself incarcerated for assault, and things only devolve from there — involving codependent fellow inmates and intervention by the devil himself before she finds a path forward. The hijinks continue through June 4.

A.B. is a solo exhibition by printmaker, painter and tattoo artist Andrew Blooms that runs through Sunday at MINT Gallery. Blooms is a Taiwanese American who says his goal is to display the beauty, simplicity and power of traditional Asian culture within a Western context. Produced by MINT and Projekt202. Opening reception Thursday 6:30-9:30 p.m.

Are cartoons art? Not fine art, for sure, but Atlanta Journal Constitution cartoonist Mike Luckovich continues to have a field day at the expense of countless politicians and sports figures, giving readers plenty of satire, humor and food for thought. And that is an art. Sketchy Truth at rek gallery features more than 40 of Luckovich’s original editorial cartoon drawings. Works in the exhibit feature his take on Trump, Brian Kemp, John Lewis, the January 6 Capitol riot and the Georgia Bulldogs. “Cartooning has become much more serious” in the last two years Luckovich says. Through June 30. 3383 Lawrenceville Highway, Tucker. 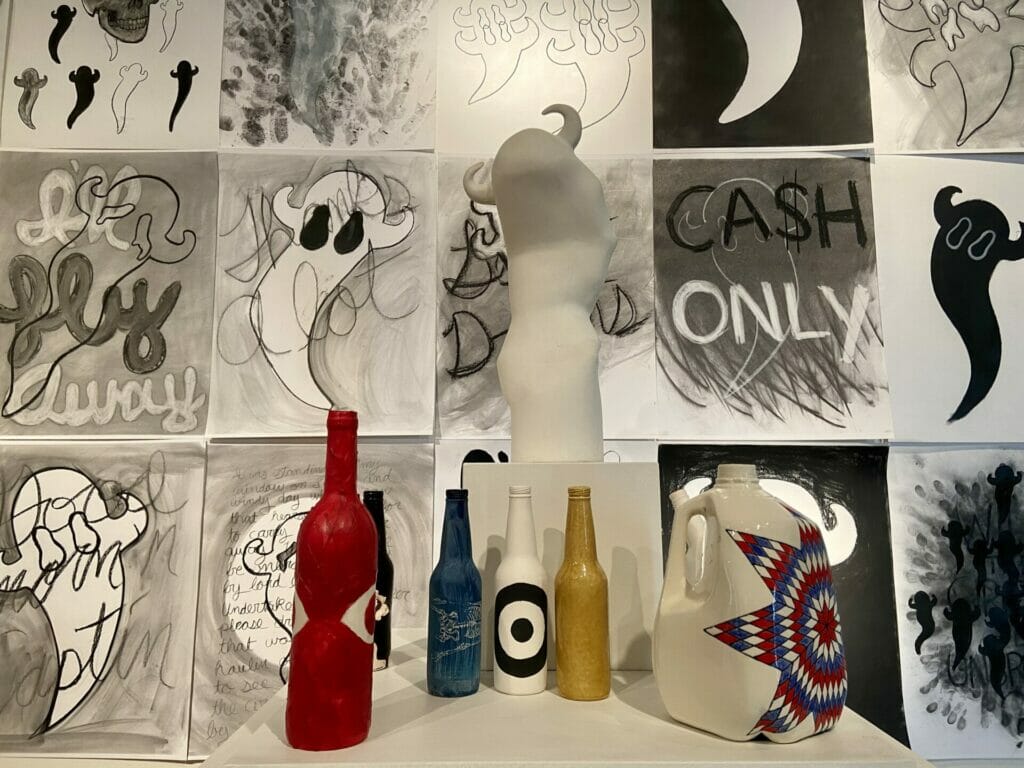 The Fowler Gallery at Hudgens Center for Art and Learning is showing the work of Marty Two Bulls Jr.  (above) in a solo exhibit, Consumption Americana. Based in Rapid City, South Dakota, Two Bulls is a member of the Oglala Sioux Tribe and comes from a family of artists. His work has been exhibited in galleries nationally and internationally and is in several museum permanent collections. Through July 16. 6400 Sugarloaf Parkway. Building 300, Duluth. 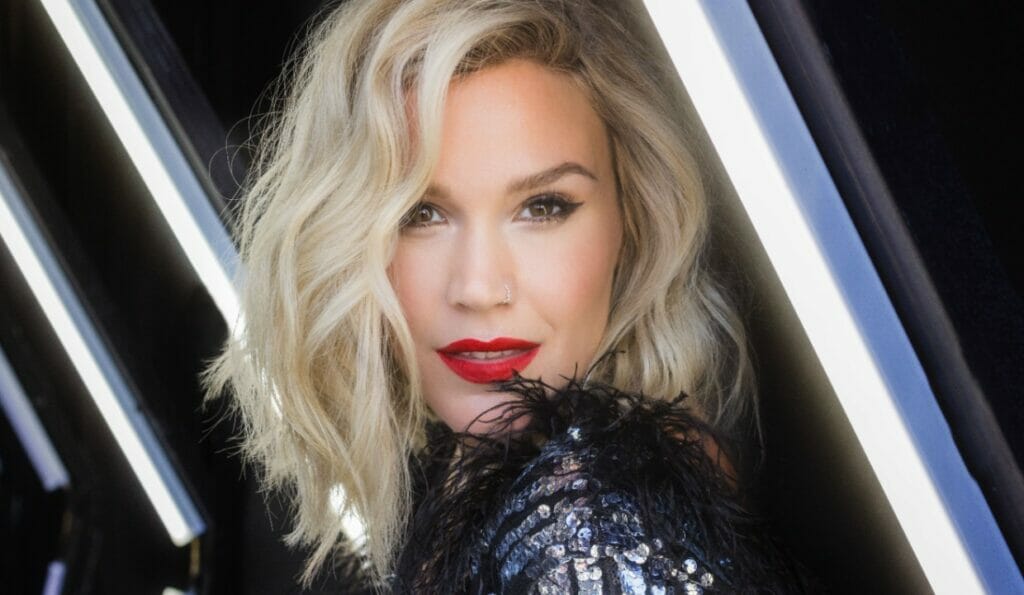 British singer Joss Stone comes to the Variety Playhouse on May 26, at 8 p.m. to support her latest album, Never Forget My Love, which was produced in Nashville by the Eurythmics’ Dave Stewart. Stone made a powerful debut with her 2003 album The Soul Sessions, her voice and aesthetic warmly recalling classic Aretha Franklin. She has since released seven studio albums that have sold more than 15 million copies worldwide. Tickets start at $44.

American Idol winner Taylor Hicks returns to Atlanta for a show at Eddie’s Attic, Friday at 9 p.m. Hicks won season 5 of American Idol and parlayed that into a No. 1 single (“Do I Make You Proud”), an autobiography, a starring role in the Broadway version of Grease and a residency in Las Vegas. He has performed with artists ranging from Willie Nelson to Snoop Dogg to the Allman Brothers Band. Tickets start at $35.

Former Top Chef contestant (season 13) and James Beard Award-winning chef Kwame Onwuachi will discuss his cookbook My America: Recipes From A Young Black Chef in a virtual talk from the Atlanta History Center’s Author Talks series Tuesday at 7 p.m. Onwuachi’s book features more than 125 recipes and celebrates the food of the African Diaspora with flavors from Nigeria, the Caribbean and the South. Free, but registration is required.