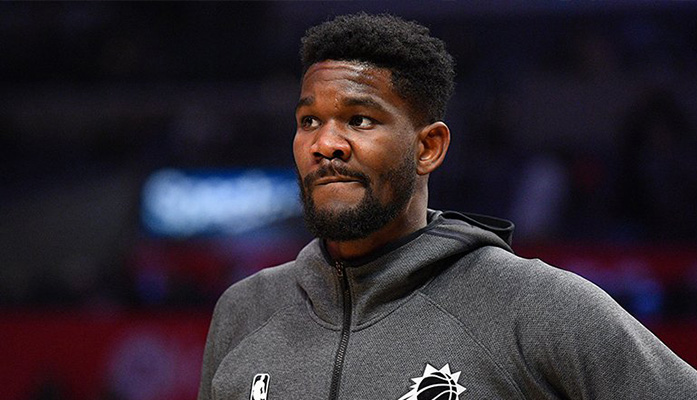 PHOENIX – Kevin Durant to the Phoenix Suns? What about Damian Lillard? Pascal Siakam? When it comes to the Deandre Ayton saga, Suns fans have had a field day putting trades together.

As a restricted free agent, Ayton, 23, has the opportunity to sign an offer sheet from any franchise that presents one, and the Suns can match any offer.

While it would make sense for the Suns to keep their ​No. 1 overall pick, the relationship between the two appears strained.

When asked about Ayton after the Suns’ semifinals loss to Dallas, all-star guard Devin Booker emphasized the close relationship they shared, but left lingering questions about Ayton’s future with the team.

“I care about him as a brother,” Booker said. “Just making sure his mental is right, making sure he’s straight off the court, just making sure he’s in the right position. We have that type of relationship. Whatever happens, happens. It’s kind of hard to look so far ahead in the future and try to determine your future. Just have to be ready to go.”

With the possibility of a sign and trade becoming more real every day, Suns fans have taken it upon themselves to put together packages for Ayton to preserve a championship roster next season.

Those ideas include securing Kevin Durant, Damian Lillard or Pascal Siakam, all stars in their own regard and the best players on their teams.

The rumors have circulated so much on social media that the Suns have the highest odds to land Kevin Durant next season outside of his current team, the Brooklyn Nets, reports OddsShark.

While fans would be happy to add a seasoned veteran third star to the Suns, the process is complicated.

A sign and trade is subject to the following rules, according to the NBA’s Collective Bargaining Agreement (CBA):

Under these rules, only four teams would have the salary cap expected to acquire Ayton in a sign and trade: the Detroit Pistons, Indiana Pacers Orlando Magic and San Antonio Spurs.

“The Suns, because of the complex rules of the NBA’s collective bargaining agreement, would be credited with half of Ayton’s outgoing salary in a trade,” Salary Cap Strategist and Bleacher Report Writer Eric Pincus told Cronkite News. “In other words, if he signed for $30 million in the first year via sign and trade, the incoming team would need to account for $30 million, but the Suns are only credited with $15 million in outgoing salary. That can be problematic in a two-team trade.”

Pincus also said, “The incoming team would have a ‘hard cap,’ a spending limit in the $156 million range for the 2022-23 season. That would knock out several teams with high payrolls, like the Golden State Warriors.”

That means it would be possible for even teams over the cap to acquire Ayton from the Suns in a sign and trade, but the return would not be nearly as glamorous as Suns fans might wish.

All these packages have solid role players that will help boost the Suns rotation, but what they don’t appear to include is a star player.

With all the sign-and-trade rules, it would be hard to trade for a star player from a salary perspective.

If the Suns were to trade for one of these max salary star players, it would have to be midseason, meaning they would likely have to sign Ayton to the max, assuming he would still be willing to play in the Valley.

Suns coach Monty Williams only briefly touched on the subject when asked about it following the playoff loss,

“Deandre’s situation is something that we’ll deal with this summer. I don’t want to say anything in regards to that. (Suns general manager) James (Jones) and I are going to have conversations about the team in general.”

If Ayton is adamant on landing with a new team this offseason, then the only true option for the Suns would be letting him walk for nothing, matching an offer at risk of a disgruntled Ayton or a sign and trade.

No matter what happens, the Suns hope to put together a championship level team next season as the championship window may close sooner rather than later.