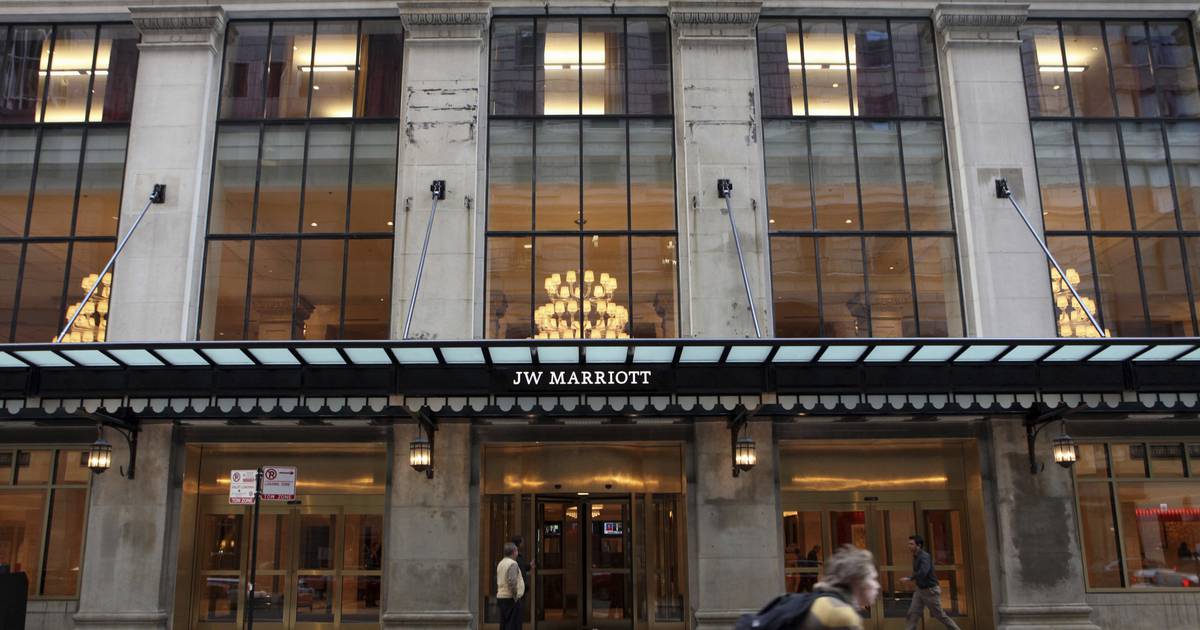 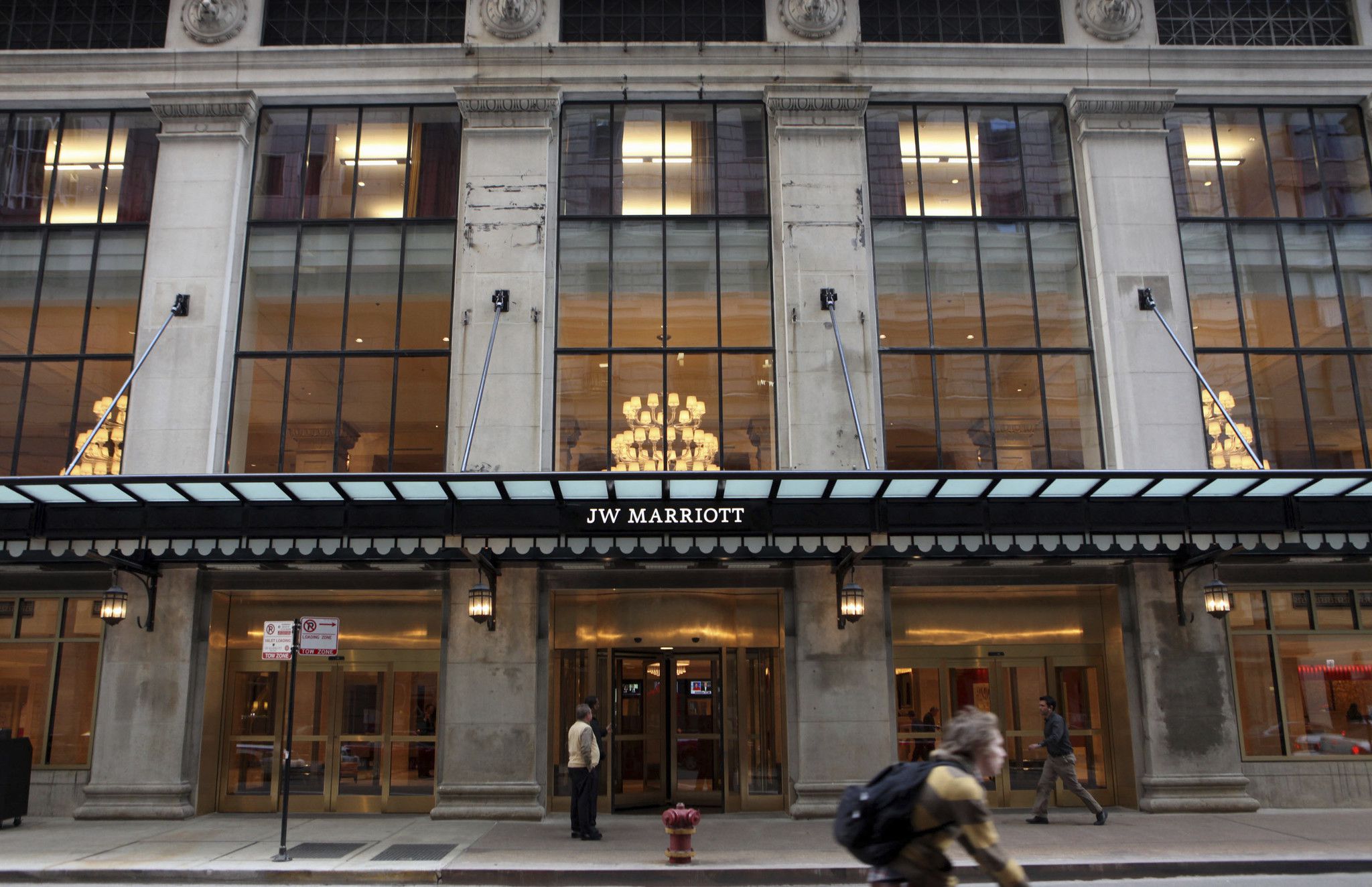 Orlando-based owner Estein USA hadn’t made a payment on the $203 million loan tied to the property at 151 West Adams St. since last summer, according to the Illinois Foreclosure Listing Service. The amount owed eventually grew to $243 million, and as trustee for investors in the loan, Wells Fargo filed a foreclosure lawsuit last year, and a sheriff’s sale was set for Friday. The bank was the sole bidder on the hotel, which remains open.

The foreclosure is a possible sign of distress for a downtown hospitality industry still struggling to recover from the pandemic. Tourists began filling downtown hotels when warm weather returned, providing much-needed relief to beleaguered owners. But business travelers remain sparse, so the hard times may not be over, and other hotels could also be headed for trouble.

“JW Marriott may not be the last hotel to find itself in the soup,” said Maverick Hotels and Restaurants CEO Robert Habeeb. “If a prominent hotel like that can fall into foreclosure, it’s a sign of some weakness in the market.”

The hotel opened in 2010, soon after developers began transforming aging Financial District office buildings into hotels to serve convention-goers and the growing tourist trade. It was riding high in 2019, the year before COVID shuttered downtown, bringing in more than $72 million with expenses of about $50 million, according to CoStar data. But it lost more than $6 million in the first nine months of 2020.

It’s not the only hotel working through a foreclosure process, or even the biggest. Wells Fargo in 2020 also sued New York-based Thor Equities, the owner of the iconic Palmer House Hilton, for missing $338 million in loan payments on the 1,641-room Loop hotel. That suit hasn’t been resolved yet.

Most hotel operators have so far avoided getting dragged into court by their lenders, Habeeb said, even though back in 2020 many thought the pandemic-related flood of red ink might overwhelm the industry. But the federal Paycheck Protection Program, which funneled billions to suffering businesses, along with the willingness of many lenders to renegotiate hotel loan payments, got many hotels past the initial crisis.

“Most people in the industry will admit PPP saved their bacon, and lenders understood the pandemic was a once-in-a-lifetime occurrence, so they were willing to be flexible,” Habeeb said.

And with tourists returning, downtown hotels are for now back in the black, according to Habeeb, who opened in March 2021 the 223-room Sable at Navy Pier. The crowds at Millennium Park, the museums, Willis Tower and other attractions, are raising hopes that the industry will finally get past the worst slowdown in its history.

“We are putting up some seriously good numbers this summer,” he said.

For the week ending July 2, downtown hotels were 78.3% occupied, and overall occupancy for June will probably be in the high 70s, roughly where it was in June 2019, according to Stacey Nadolny, Chicago-based managing director of HVS, an industry consultant.

“The Loop was jammed last week, just people everywhere,” she said. “It was a lot of fun to see so many downtown and doing stuff in Chicago again.”

The real test will come when summer ends and most tourists vanish. Business travelers historically filled Chicago’s hotel rooms in colder months, but with offices nationwide less than half full, most companies are reluctant to send employees on trips.

Hotel operators still see a future in the Financial District. The 215-room Canopy by Hilton Chicago Central Loop opened in 2021 at 226 W. Jackson Blvd., and the 232-room LaSalle Hotel, developed and owned by Michael Reschke’s The Prime Group, opened this year on the top five floors of 208 S. LaSalle St.

That could be stiff competition for the JW Marriott Chicago, which has been popular with business travelers due to its large meeting spaces, Nadolny said. She assumes Wells Fargo will now sell to recover its losses, and that JW Marriott will continue as manager, but whoever ends up owning the property may need to renovate it to keep up with new neighbors such as LaSalle Hotel.

Whatever the future holds for downtown hotels, owners will still have to meet their loan payments, Habeeb said. Many also worry about rising property taxes, rising interest rates, and perceptions about increasing crime. And unlike in 2020, lenders will probably be less flexible if financial hardships continue.

“You can negotiate a new [loan] agreement for a once-in-a-lifetime pandemic, but you’re not going to get one for high crime rates,” he said.