‘We’ll get around Kabul like an anaconda’: Taliban sets sights on capital 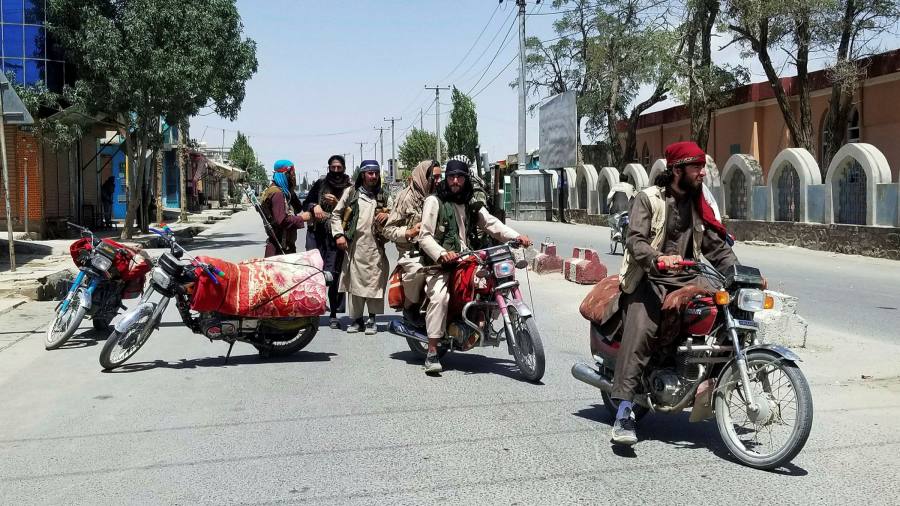 Faizabad, a rugged outpost in the Hindu Kush mountains of north-east Afghanistan, was long a base of resistance to the Taliban, never falling to the Islamists when they ruled in the 1990s.

But the town was among at least 11 Afghan provincial capitals, a third of the total, captured this week in a lightning Taliban offensive launched in the wake of US troops’ hasty departure that has shifted the balance of power in Afghanistan. The Islamist militants now control Herat and are on the verge of taking Kandahar, the country’s third- and second-largest cities, respectively.

Analysts, diplomats and security officials said they underestimated the military strategy of the Taliban, which has routed a better-equipped Afghan army that outnumbers them at least three to one.

The offensive has left little hope that the Taliban will seek a political settlement as its fighters encircle Kabul. The insurgents want to force President Ashraf Ghani’s surrender or will launch a bloody assault on the capital of about 4.5m residents.

Taking advantage of the confusion following the US exit, the militant group swept the countryside, laid siege to Herat and Kandahar in the south and west before assaulting the north, a historic bastion of anti-Taliban resistance. Demoralised Afghan troops surrendered or fled, leaving behind weapons and supplies. The insurgents’ numbers were bolstered by an agreement signed with the US to release prisoners, based on a 2020 deal signed by the Trump administration that bypassed Ghani’s government.

The insurgents’ numbers were bolstered by a US deal to release prisoners, based on a 2020 deal signed by the Trump administration with the Taliban that bypassed Ghani’s government.

“I’ve never seen the Taliban strategise in the way they have been doing in the past few weeks in the seizure of these cities,” said Ahmed Rashid, an author who has followed the Taliban for decades.

Almost 20 years after the Taliban was forced from power by the US, the militants are closer than ever to toppling Ghani’s democratic government and installing a brutal Islamic emirate. Observers warned that the Taliban would extinguish rights for women and could once again turn Afghanistan into a haven for international terrorism — with groups such as al-Qaeda and Isis already present in the country.

A US defence official told the Financial Times that “the assessment has deteriorated”, with Kabul at risk from direct attack. “They’re probably surprised with how quickly it’s going as well.”

Muhammad Zadran, a high-ranking Taliban member in the country’s southern Paktia province, said: “We will get around Kabul like an anaconda. Control of Kabul and the Afghan regime is inevitable, perhaps a few weeks away.”

Ghani’s western allies have responded feebly, stoking fears of a snowballing humanitarian and international migrant crisis. Joe Biden this week reaffirmed his commitment to pull out the remaining US troops by the end of this month. It was time, he said, that Afghans “fight for themselves”.

But critics argued the withdrawal has ended any chance of peace.

“The Taliban’s strategy over the last two weeks has been nothing short of brilliant,” said a western diplomat. “They knew the government would fight tooth and nail [to defend southern cities], so they hit three at the same time. Once reserves were committed, they struck all the north simultaneously.”

The diplomat added: “There’s been a giant smokescreen spun that the Taliban wants peace. All they’ve ever wanted is outright victory.”

The Taliban has captured Puli Khumri and Ghazni, giving them control of the highways leading into Kabul from the north and south-west. The insurgents said they wanted to take the city before the freezing winter slows down fighting.

“Afghan forces have to defend many different cities, critical infrastructure sites, key routes,” said a former senior US intelligence official. “The Taliban can mass where it chooses, and it has done so quite effectively.”

Any battle for Kabul is expected to prove tougher for the Taliban, and deadlier for civilians. Afghanistan’s elite special forces were spread too thin defending the provincial cities, but will mass in the capital.

A member of the Taliban leadership council acknowledged that “the cream of the Afghan forces will leave the rest of the country and will gather for the fight for Kabul”.

Much of the blame for the losses has been placed on Afghanistan’s army, which has withdrawn without a fight in many places. Analysts said its capabilities have been crippled by graft and mismanagement, despite billions of dollars worth of US training and equipment.

The government has also struggled. On Wednesday, it replaced the army chief for the third time in a year and the finance minister quit and left the country. “It’s hard to imagine the Ghani government remaining in power [for long],” said Abdul Basit, a retired Pakistani diplomat.

Javid Faisal, an adviser to the Afghan government, said the country was being abandoned by its allies. “Afghanistan must not be left alone at this crucial juncture,” he said.

“Nato and US forces altogether, with all their equipment, could not win. How do they expect the Afghan forces to do it entirely on their own?” he added. “Still the Afghan forces are determined . . . They are well trained and will continue to protect their country.”

The government has blamed the Taliban’s success on neighbouring Pakistan, which has for decades been accused of quietly providing shelter and assistance to the Islamists even while pledging to support the US. A senior Pakistani foreign ministry official dismissed suggestions that it was “the villain”.

The US defence official said the Taliban was strengthening with every victory, restocking on equipment from each provincial military headquarters it over-ran.

“The Afghans need the regular forces to make a stand. So far they have not been able to,” the official said.

Faisal, the government adviser, warned the international community of a humanitarian crisis if it did not act. “If violence continues, if Afghans are forced to abandon their houses, this is going to be a loss for our neighbours, the region and the world.”