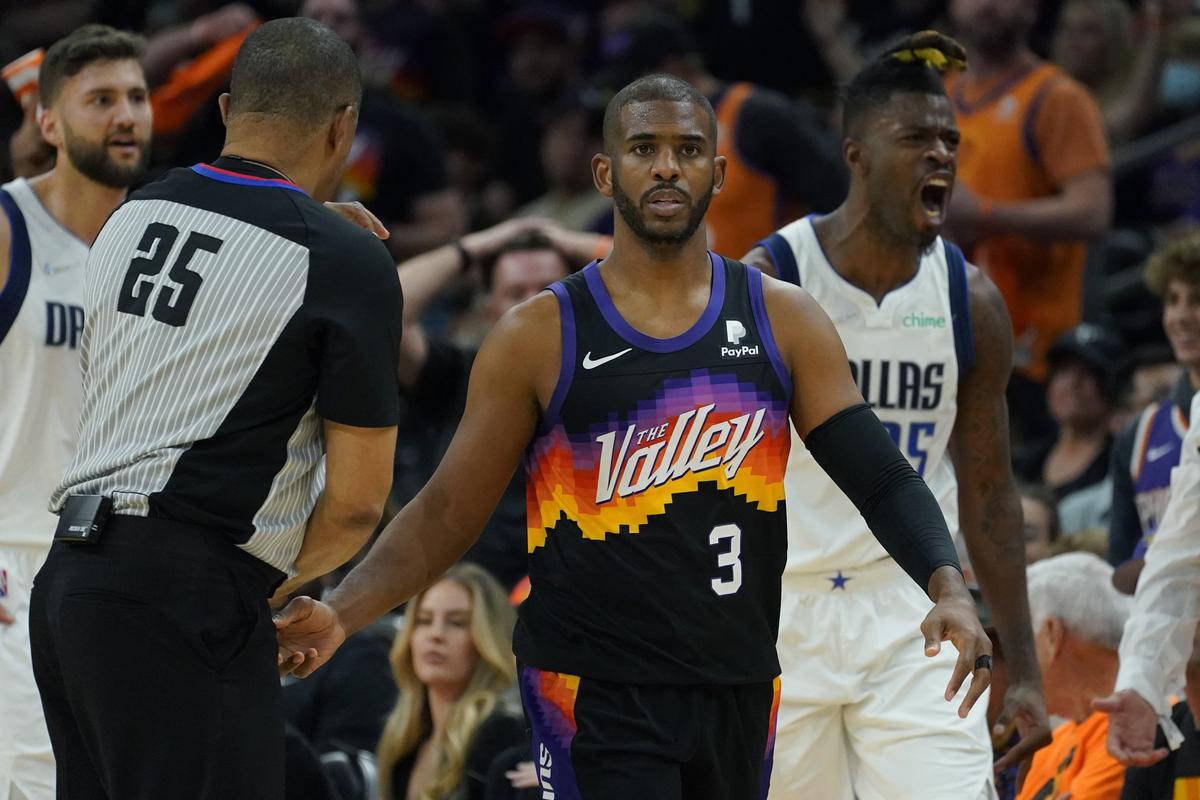 Phoenix Suns guard Chris Paul (3) and Dallas Mavericks forward Reggie Bullock, right, react after Paul was called for a foul during the first half of Game 2 Wednesday, May 4, 2022, in Phoenix.

The glory days of the sports betting calendar are starting to disappear.

With the fields in the NBA and Stanley Cup Playoffs diminishing, betting boards are slightly less packed on a daily basis. There’s still plenty of action to be found — a lot more than a couple months from now in the summer — but as recently as last week, Weekend Wagers could have found multiple betting options in 10 different sports.

That’s not the case this week. I’ll continue to try to cover everything major in the column but the NBA, for instance, had only one game sure to go this weekend as of publication time Friday — Sunday’s Game 7 showdown where Phoenix is a 6-point favorite over Dallas.

I lean the Suns, but already have enough long-term exposure on them and would rather not bet more on a do-or-die game. So the NBA will be a reluctant pass this week, and I’ll instead handicap bets in six other sports.

It’s nice to still have that much variety, at least for a few more weeks before summer takes over and preparation for football season becomes the betting focus.

Read below for this weekend’s plays. Records are attached for each individual sport since the column restarted for 2022 post-football season with a cumulative tally at the bottom of the page. Lines are the best available in Las Vegas at publication time.

Cardinals starter Dakota Hudson’s traditional statistics look a lot better than his advanced numbers. That makes him a fade candidate going forward. Saturday’s game looks like a golden spot to put that into action against a Giants’ team that has quietly had one of the best offenses in the National League. They’ve scored 155 runs and are certainly a lot more potent at the plate than the Cardinals. Giants starter Jakob Junis is no Ace himself, but he’s been solid through one start and two relief appearances this year. San Francisco had won five in a row entering Friday night’s action, and should keep up the recent hot streak Saturday afternoon.

The Kings put up a valiant effort in this series, but after blowing a chance to eliminate the Oilers with the score tied at 2-2 in the third period of Game 6 in Los Angeles, it feels all but over. The Oilers should roll in a Game 7 in Edmonton, right? So much so that I don’t mind laying the puck line considering it’s this highly priced. Edmonton -1.5 closed at +110 in Game 5 at Rogers Place, and this one should also drift downwards in that direction. Edmonton has outperformed Los Angeles by about three expected goals at even-strength through the series, and that’s with the latter playing to their peak in a couple instances. It’s never comfortable to lay the 1.5 in the NHL, but this feels like an Oilers’ win with at worst a chance for an empty-net goal to cover the spread late.

Two straight controversial heavyweight decisions have broken against me to tank this category, so let’s swing to the other extreme as far as weight classes with women’s strawweight. Size should still play a significant factor in this fight, though. Chookagian is a former bantamweight (135) while Ribas has only recently moved up to strawweight (125) from flyweight (115). In other words, Chookagian is much bigger. So much bigger that it’s hard to ignore in what otherwise looks like a pretty even matchup from a skills perspective. Ribas will need to get Chookagian down, and it’s hard to see her doing that consistently with the size discrepancy.  Chookagian has won three straight, and four of her last five, by decision. It’s been a profitable method-of-victory prop bet in the past, and can hopefully keep up here.

The Stallions are the lone undefeated team left standing in the USFL, but I’m going to continue betting against them. Their statistical profile just doesn’t match their win-loss record. They’re third in the league with a +0.4 net yard per play and have greatly benefitted from fumble luck. Birmingham is better than Philadelphia but not by much. The Stars’ offense didn’t miss a beat in a win over the Michigan Panthers last week despite well-named backup quarterback Case Cookus having to take over for the injured Bryan Scott. I made the number Birmingham -3.5 in this Week 5 matchup, leaving more than enough value to bet on Philadelphia at this price.

Chastain has been unstoppable at the cookie-cutter, 1.5-mile tracks on the NASCAR circuit this year. He’s got to be thrilled to be returning to another in Kansas City this weekend. He’s been so good that he should be a bigger favorite in matchups to all but the very best intermediate drivers such as Kyle Larson and Chase Elliott. Truex once belonged in that group, but he doesn’t this year as Joe Gibbs Racing hasn’t really kept up with Hendrick Motorsports on the 1.5-mile tracks. There will surely be better matchups around town by Sunday, but the SuperBook is currently the only shop with lines posted so this is the best available. Chastain should contend while Truex’s prospects are murkier.

Justin Thomas celebrates after a birdie on the 13th hole during the final round of the PGA Championship golf tournament at the Quail Hollow Club Sunday, Aug. 13, 2017, in Charlotte, N.C.

Thomas may not win the AT&T Byron Nelson this weekend because of a rough start in Thursday’s first round, but he’s in position to come close at -10 through two rounds. That means his price for next week’s second major tournament on the calendar may crash. And it should crash. Thomas doesn’t have a win this season, but he’s arguably playing better than anyone outside of Masters champion Scottie Scheffler. He’s crushing the ball off the tee and lapping the field in terms of approach shots. Both areas will be of the utmost importance at Southern Hills in Tulsa, Okla. Thomas, Scheffler and Jon Rahm should all roughly be co-favorites to emerge victorious. Being able to get Thomas at this high of a price is a steal, and an opportunity that won’t be around long.

The 8 Best Places to Buy Swimsuits (and Why)