‘We make the wheels turn’: Workers find power in Fight for $15 movement 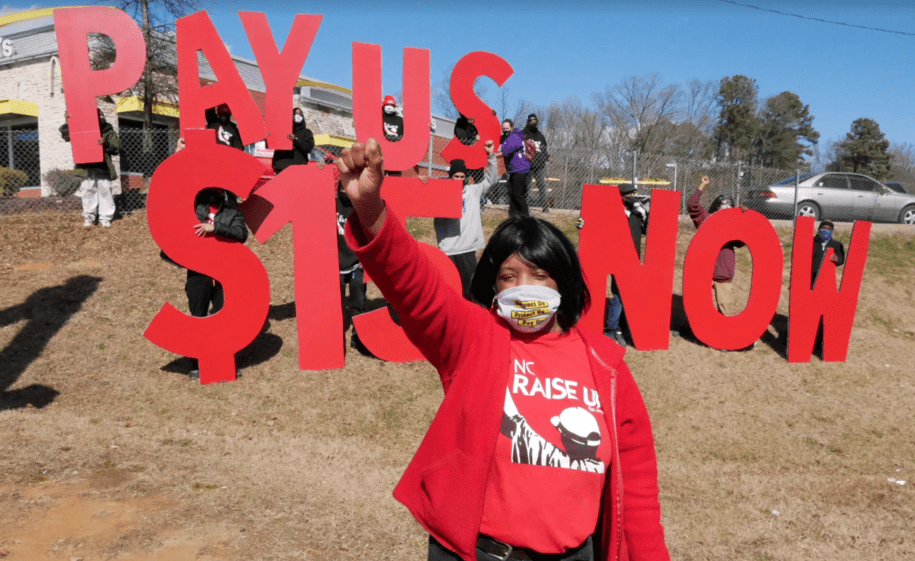 The 42-year-old participated in the Feb. 16 strike along with other fast food workers who are members of the Durham, North Carolina’s branch of Fight for $15 called NC Raise Up, which began in 2013 and includes a variety of low-wage workers organizing across the restaurant and service sectors. At the start of the pandemic, Franceis left her job at a nursing home—sites of the earliest and deadliest COVID-19 hotspots—to reenter the fast food industry, thinking it would be safer than continuing her work as certified nursing assistant. Not only did she take a significant pay cut, but she was put at risk when COVID-19 was severely and repeatedly mishandled at her Durham store. This is why Franceis joined Fight for $15 and a Union, and she has a message for workers who are afraid to organize: Know your power.

Here she is, in her own words:

I worked at Freddy’s about six years ago before I went into nursing. When the pandemic first started, I was working at a nursing home and I knew I had a hard decision to make. Cases were popping off like wildfire. I have a 2-year-old grandson I’m with every weekend; I have an 89-year-old mother-in-law; I have a 12-year-old son and a fiancé. I have a family life and their safety and my safety is most important to me. You can’t put a price on that. I decided to make the tough decision to leave my job. Not working was not an option. I knew I would make a lot less going back to Freddy’s, but that’s what I did. I went from bringing about $1,200 home every two weeks to $500 and some change. It was a big hit.

COVID-19 is like a bullet; it has no name, no direction. It’s just out there and it can hit anybody. I didn’t think I was going to dodge it by working at Freddy’s, but I also didn’t think the risk would be as high as working at a nursing home. We’ve had a lot of cases, and they were mishandled. They didn’t do a deep cleaning of the store and they didn’t pay us if we had to quarantine. We didn’t get hazard pay. There is also an emotional toll of working through COVID-19. Customers are mostly good about wearing masks, but we had a couple of incidents where people refused. There were days where I felt straight hysterical because it can feel like everyone is playing with your life.
This is why I joined the Fight for $15 and a union. I really didn’t know much about it until I needed it, if that makes sense. My co-worker at Freddy’s is Jamila Allen and she’s a key person in NC Rise Up. When COVID-19 was getting mishandled, she told me we should organize our store and that’s what we did. We did a walkout [in August] and went on strike for one day. We demanded $15 an hour and hazard pay; we demanded that they pay us if we have to quarantine. I never felt such empowerment like I did that day. From that day forward, I became a part of the Fight for $15.

After the first strike, management told us they needed time to work on things; that they couldn’t meet all of our demands. The company wanted us to bear with them. We gave them that time, but then we had a COVID-19 cluster [in October] that was totally mishandled. They didn’t inform us and we didn’t find out until it was too late. That’s when we decided to go on strike for a week. Not all employees did, but key employees did. The next thing I know, the head of HR for the entire company and the company CEO came to the store themselves. It was a moment, like come see us about us!

“If you get sick, stay at home” is not a COVID-19 policy. “If you’ve been exposed, go get tested” is not a COVID-19 policy. Freddy’s now has a real COVID-19 policy because of us. If we get sick in the store, the company is paying for our test. If we have to miss days of work to wait for our results, we will get paid. If we get COVID-19, they’re going to do contract tracing and pay us for the days we have to quarantine. They also got rid of the management who mishandled the COVID-19 cases before. None of this would have been possible without us, the little workers everyone wants to minimize. But guess what? We make the wheels turn. Without us, there is no business. After the second walkout, everyone at the top had to recognize that we make things run and they couldn’t stand in front of us and ask us for more patience when we’ve already given them so much. That sense of empowerment, I will take with me the rest of my life. I never knew how much power mere fast food workers and minimum wage workers could have.

Striking can be scary, I’m not going to lie. A lot of my co-workers were scared, especially during the last walkout. We did it at noon on the dot, during the lunch rush. There were cars in the drive-thru, people in line, food cooking—and we walked out. I think some of my co-workers felt bad, like they were leaving the company hanging. They said they would walk out until it came time to, and then they didn’t. I didn’t have those feelings. Personally, if you don’t care about me then I can’t care about you, and management was showing us that they didn’t care about us. If you are scared to organize, this is what I would say: The proof is in the pudding. In December when we had another COVID-19 case, management immediately shut down the store. Professional cleaners in hazmat suits came and did a deep cleaning. The people who had to quarantine were paid. That’s all because of organizing. Look at it like this: If we work, they make money. So what happens if we don’t work? Without you there is no business. These businesses get so caught up in business that they forget who is really running things. But don’t you forget that because that’s where your power is.

You got nothing to lose. That’s the other thing I would tell someone. Join the Fight for $15 because you have nothing to lose, and they will have your back. They know the labor laws and they have their ducks in a row. You can’t be fired or retaliated against for organizing. I know that going up against a big company is scary, but organizing with people will give you all the confidence in the world. I’m living proof that being a part of the Fight for $15 will give you a sense of empowerment like you never thought possible. I know that I’m important. I know that my work is important. You really think that they’re going to come down from their cushy offices and drop these fries and flip these burgers themselves? They are not. If we’re not here, they don’t make money. If none of us show up, they can’t open the store. These businesses crunch numbers all day, so you have to hit them where it hurts. A day with no numbers to crunch makes them crazy, just like it makes us low-wage workers crazy to try to crunch numbers for the bills we don’t have money to pay.

I think we will get $15 an hour very soon and when we do, it will have a big impact on my life—especially when it comes to paying bills. I won’t have to rob Peter to pay Paul and rob Paul to pay Joe. The raise would also definitely allow me to be able to do little things I want to do, like buy the kids some clothes or shoes. Maybe it would free up a little money from each paycheck so that I could actually save up to put a down payment on a house. A raise to $15 would help all of us; however, it’s not enough. We need more, and we need unions. I think it comes back to fear again. As low-wage fast food workers, you can feel like organizing means risking it all. It can feel like you’re rolling the dice. Organizing can feel like dealing with a mess and you would rather not risk it and just have what you have. But that’s a frame of mind you get trapped into. Like I said before: Never forget the power that you have. We need to push out of our safe zones. I’m not going to stop at $15 an hour. I’m going to fight for raises that take us to new heights. We need health insurance. We need to have a lot of things and $15 an hour is just the start.

I don’t think the Biden administration is “receptive” to $15 an hour; I think we have worn down people in government. They’re receptive because they are tired of hearing from us and have no choice but to be receptive because we have literally worn them out. At this point it’s basically like they have no choice but to lie down and give us what we need. If I had the opportunity to address the Biden administration, I would say: “Thank you for not fighting against us any longer. We’ve been fought against for so long. Thank you for allowing us to rest a little bit.” The fight is definitely not over. We’re going to get this $15 and maybe relax for a minute and celebrate, but we’re going to keep fighting and keep our eye on the ball. It will lighten the load a little bit, but it doesn’t take the load off entirely. We still have mountains to climb.

I want people to remember that when we do get $15 an hour, it took low-wage workers around the country to make it happen. We are tired and we made them so tired they had no choice. Please don’t forget that. This is going to happen because of us.

In the coming weeks, home care and nursing home workers will be holding 15 actions in 15 cities in support of a $15 minimum wage. The care workers will be taking action outside agencies that oversee Medicaid in Atlanta, Tampa, and at least 12 other cities, calling for a major investment in Medicaid and support of President Joe Biden’s care workforce plan that centers Black, Latina, Asian women, and immigrants who do the bulk of caregiving work.

The Spying That Changed Big Tech

For the love of the loot: Blockchain, the metaverse and gaming’s blind spot – TechCrunch