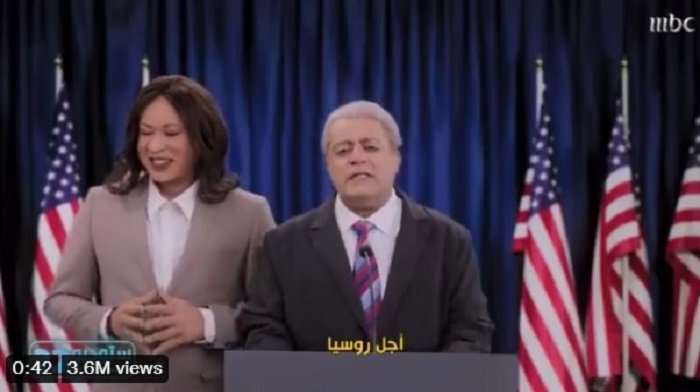 The comedy sketch was something you might expect to see out of Saturday Night Live back in their heyday … if Biden were a Republican.

Much of the very brief segment shows an actor, wearing something similar to Harris’ outfit at the State of the Union speech, which bore a striking resemblance to a UPS uniform, guiding Biden around the stage and correcting him every time he misspeaks.

It begins with the character playing Biden pointing to reporters and then meandering off stage as Harris quickly shuffles behind to steer him back to the podium.

“Thank you very much. Today, we gotta talk about the crisis [in] Spain,” the Biden character says before the fake veep whispers in his ear.

“Yeah, we gotta talk about the crisis in Africa,” he says before being corrected again.

He tries once more: “Yeah, Russia.”

In yet another jab at Biden during the Saudi comedy skit, the President refers to Kamala Harris as the First Lady.

Which, on its surface is pretty funny, but even more so when you consider that isn’t exactly parody – Biden has actually done this before.

Just last month, Biden was informing those at an event that Harris’ husband, second gentleman Doug Emhoff, had tested positive for COVID.

“There’s been a little change in arrangement of who is on the stage because of the first lady’s husband contracting COVID,” Biden announced, seemingly forgetting that the actual First Lady is his wife, Jill Biden.

President Biden mistakenly referred to ‘the first lady’s husband’ contracting COVID before correcting himself to say it was Vice President Kamala Harris’s husband, Doug Emhoff, who had tested positive pic.twitter.com/XvyoyzS6xb

Biden Embarrassing on the World Stage

What stands out here is that, had Saudi Arabia produced a comedy skit mocking former President Donald Trump in the same manner, the media would be playing it non-stop and declaring how Trump was embarrassing America on the world stage.

Instead, you’re likely only seeing this clip by coming to The Political Insider or other independent outlets.

In fact, do you know which country’s state-run media did mock President Trump? Russia’s. You know, the country he was portrayed as being in bed with.

Russian state television in 2019 described Trump as “this clown” and described his foreign policy as “failures at every turn.”

It’s clear that not only does Saudi state-run media view Biden as a true clown, but so does the government itself.

Reports surfaced last month that leaders in Saudi Arabia and the United Arab Emirates (UAE) refused to take calls from the White House as Biden was pushing for more oil production during the Russian invasion of Ukraine.

Leaders of Saudi Arabia and the United Arab Emirates declined requests to speak to President Biden during the Ukraine crisis, officials say. They both took calls from Putin. https://t.co/McsybyBKw8

Popular podcast host Joe Rogan has questioned the mental capacity of the President, suggesting “everybody knows he’s out of his mind.”

Joe Rogan on the current state of American politics: “We’re unhinged … We don’t really have a leader in this country anymore.” pic.twitter.com/0JvfzoVsFD

Former White House doctor and current Texas congressman Ronny Jackson predicted last July that President Biden will either be pressured to resign or he’ll be removed via the 25th Amendment.

“There’s something seriously going on with this man right now,” Jackson said.

Something’s SERIOUSLY wrong with Biden – and it’s only going to get WORSE! It’s past the point of embarrassment. He’s lost. He’s confused. He can barely put a coherent sentence together. He MUST have a cognitive exam and release the results! pic.twitter.com/Pk5Pq2V5Um

Problem is, if Biden is removed or steps down, ‘First Lady’ Kamala Harris will step in. And I’m not quite sure she’s any more competent or capable than what we’re seeing from the White House right now.

“The world’s gas station thinks our President’s a laughing stock. It’s not good for business,” said Watters. “So much for America being back.”