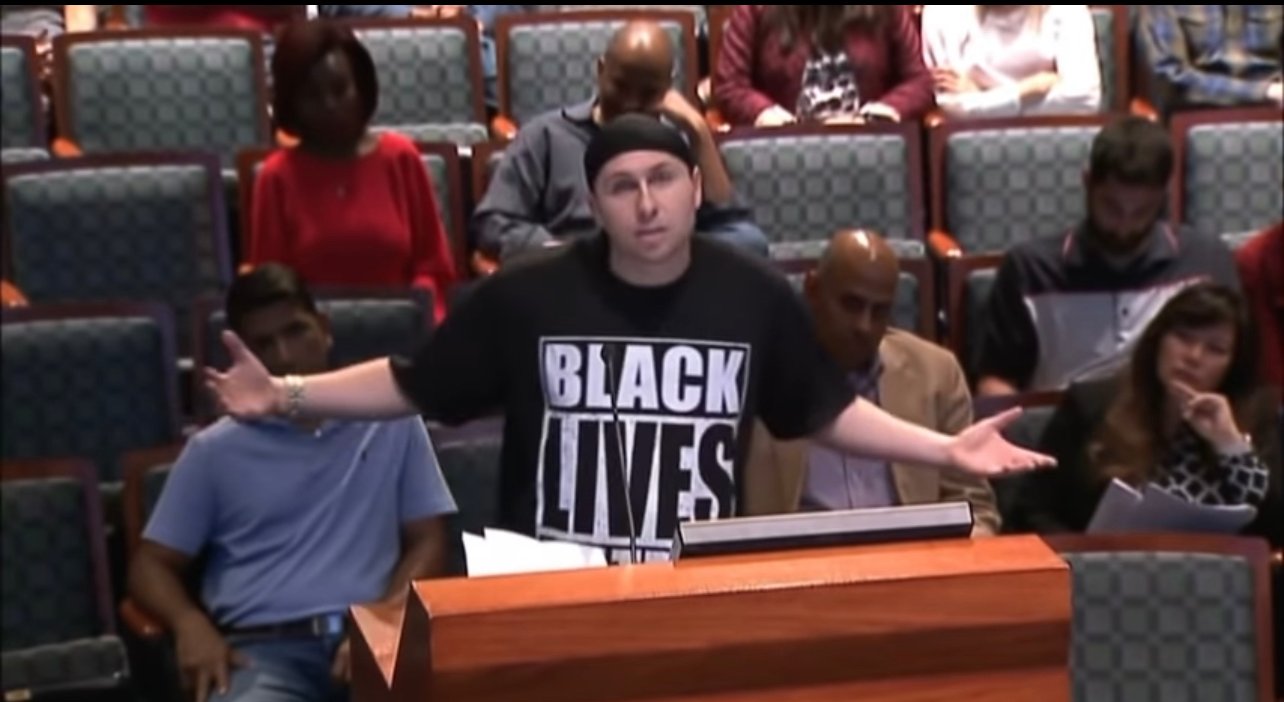 Cassady Campbell, known for his hilarious and jaw-dropping pranks, hijacked the council meeting last Tuesday. He has 1.61 million subscribers on Youtube and 38k followers on Twitter.

“I create original comedy content on various social media platforms such as Youtube, Facebook, and Instagram where I play numerous characters such as my most famous ones being the Wanksta, spoiled rich kid, Redneck and flamboyant character and many more,” according to his website.

On Tuesday, Campbell proposed “TO SAY HIS NAME BILL” to honor “my homie George Floyd” who has been “sober for two years,” during the city council meeting.

“So I just got my ancestry DNA test back, and I’m 2% black. The reason I’m up here today is because you all trifling and we need to honor my homie, George Lloyd, who has now been sober for two years. And this is going to be called, To Say His Name Bill,” Campbell said.

“So first of all, let’s take a knee to the Pledge of Allegiance of George Floyd. Well, I recite the pledge. Everybody take a knee, please,” Campbell demanded.

“I pledge allegiance to George Floyd and the Black Lives Matter movement and the causes for which they stand. One sentence, “I can’t breathe with methamphetamine and fentanyl for all.” he continued.

Unfortunately, nobody in the room listened to Campbell so he accused the crowd of being a racist.

“Nobody took a knee, I see. I guess you are all racist. You all were taking a knee back in 2020, though. Am I the only one still taking knees?”

Campbell then presented what will be included in the “To Say His Name Bill” for Kindergarten through Grade 12.

“So first of all, white kids need to hold their breath for eight minutes every day. White kids have to do the black kids’ school work. White kids have to give black kids their lunch money or else they go to the principal’s office. Everyone will watch George Floyd’s sex tape and write an essay on it. Every Veterans Day, we will honor George Floyd as he served as a security guard for the Salvation Army,” Campbell announced.

“White kids will sit in the back of the bus so that they can live the experience of Rosa Parks. Black kids will start with a baseline grade on all schoolwork of 80% and white kids will start with 0%. In order to end racism, students will post a black square on all social media platforms to end racism and spread equality. Premade Molotov cocktails will be for sale in the school store and they will be highly encouraged that they are used on school police cars. If a white kid acts up in the classroom, the teacher will be called to put on a knee on his neck,” Campbell continued.

“If a black kid shoots someone in school, it will be justified and labeled as self-defense because he was bullied no matter what due to skin color and he will be celebrated as a national hero. Black kids will be issued guns in school for protection against white supremacy. The “N-word” will be called a trigger word which means they will now be allowed to pull it. Black-on-black crime will be encouraged as it is in Chicago in order to end white supremacy. In the name of the greatest Mayor of all time, Lori Lightfoot,” said Campbell

“I love you, Lori. Bless you” as he pounded his chest and pointed to heaven.

One of the council members interrupted him and asked the city lawyer present in the meeting if they would allow Campbell to continue.

Campbell then responded to him and said, “Last time I checked you all took a knee for George Floyd.”

It’s absolute satire and he did a great job pointing out all of the ignorance.
Reverse psychology
Yet when he does it everyone thinks he’s foolish
But When our lawmakers do it it’s applauded!

Campbell continued and ended his speech by asking for reparations.

Watch the full video below: