Wall Street has reason to worry about working from home 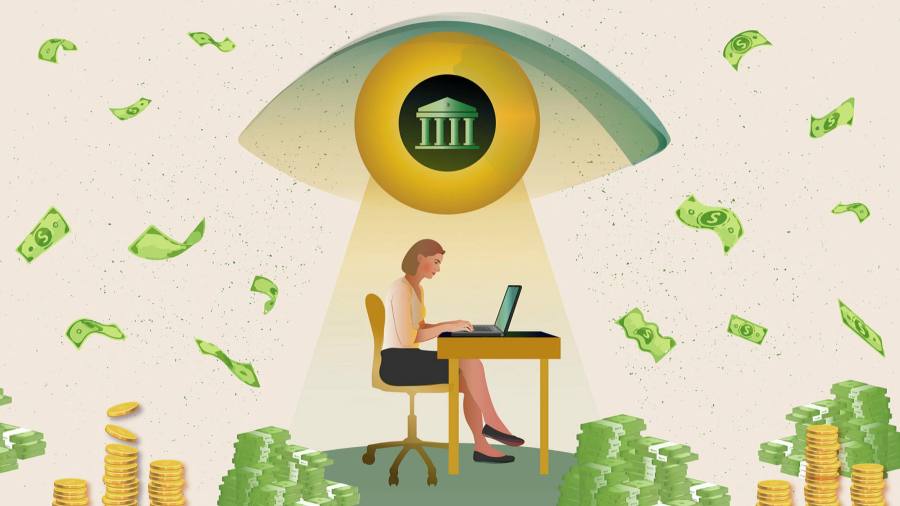 Sign up to myFT Daily Digest to be the first to know about Financial services news.

The big bankers on Wall Street like to play it cool in public. As we say in New York, it’s their shtick — the technique they employ to win the trust of other participants in the financial markets.

So it has been discombobulating in recent months to see so many masters of the universe — JPMorgan Chase’s Jamie Dimon, David Solomon of Goldman Sachs, Morgan Stanley’s James Gorman — fretting so openly about the need for their employees to return to the office.

Their proclamations have been buttressed by high-minded sentiments emphasising the importance of mentoring younger employees, building cohesive teams and promoting diversity. But their tone has been different — irritated, if not insensitive to the concerns of staff worn down by the demands of hours-long commutes.

The fact is bank executives have more reasons to worry than they let on. Working at home with trillions of dollars of other people’s money is a risky experiment. The legal and regulatory hazards are significant. It stands to reason that bank bosses and their government supervisors would be itching to get a better view of the action.

“In an industry that is more heavily regulated, there is going to be a concern about a lack of control over the day-to-day activities of their employees,” says Charles Elson, a corporate governance expert at the University of Delaware. “You are much more casual at home than you might be at an office — there is no one to watch you except your dog.”

The difficulty for banks is that it takes more than a clever canine to make sure employees follow the exacting rules of their federal regulators. One example involves the requirement that they preserve records of business communications for years — even if the conversations take place on personal devices, using messaging services such as WhatsApp.

JPMorgan revealed this month in a government filing that “certain of its regulators” had been asking about “its compliance with records preservation requirements” for electronic messages sent over channels the bank had not approved. JPMorgan said it was “co-operating with these inquiries and is currently engaged in certain resolution discussions”.

Of course, concerns about Wall Street wheeler dealers gabbing among themselves on WhatsApp predate the pandemic and have involved companies other than JPMorgan. Two senior commodities traders at Morgan Stanley lost their jobs last year for their failures to stop using such communications. Other banks will almost certainly face similar issues.

But it is hard to see how working from home would reduce the opportunities to send prohibited texts to colleagues. Nor would the practice necessarily foster compliance with, say, insider trading laws or the corporate policies aimed at preventing bullying or sexual harassment.

Bankers will tell you that they embarked on working from home in much the same way that Donald Rumsfeld said he went into Iraq — conscious that there were “known unknowns” that could undermine the mission. On the fly, and benefiting from the forbearance of regulators hoping things would work out, they redoubled efforts to improve risk, audit and other controls aimed at preventing everything from slacking to stealing by employees outside the office.

But what they cannot say for sure is whether they have succeeded. Hope abounds these days because Wall Street has dodged one bullet after another during the pandemic and prices only seem to go up. But one industry executive confessed to me that the final verdict on working from home might be years away. Banks are that complicated.

Waiting for the process to play out could be especially hard on the older CEOs who are leading the calls for a return to the office. I’m not saying they deserve sympathy — just understanding. Many of them grew up in a less bureaucratic, more personal Wall Street, where they interacted closely with their bosses and grew accustomed to such relationships.

Economist Henry Kaufman, a former Salomon Brothers executive committee member who at 93 remains an incisive commentator on the ways of Wall Street, told me that as recently as the early 1980s, the dawn of the Reagan revolution, a partner of his firm would sit at every large trading desk to make sure no one was doing anything foolish. “There was close observation by a partner of what was going on,” he adds. “The partners were at risk — it was their capital.”

That kind of personal touch faded as firms such as Salomon shed their partnership structures and were absorbed into bigger banks — in this case, Citigroup — with high-speed computerised trading businesses. Now, Kaufman says, “the owners of the business are stockholders, who are outside somewhere — and unknown”.

Wall Street’s ultimate bet is that the automation will save the day, creating audit trails that will make fraud or malfeasance harder to cover up — whether workers stay at home or not. Lurking in the background is the promise of blockchain technology and decentralised finance protocols that threaten to eliminate human intermediaries altogether.

It is almost quaint that so many bank bosses still want to look their employees in the eye. Then again, maybe they know something the rest of us don’t.