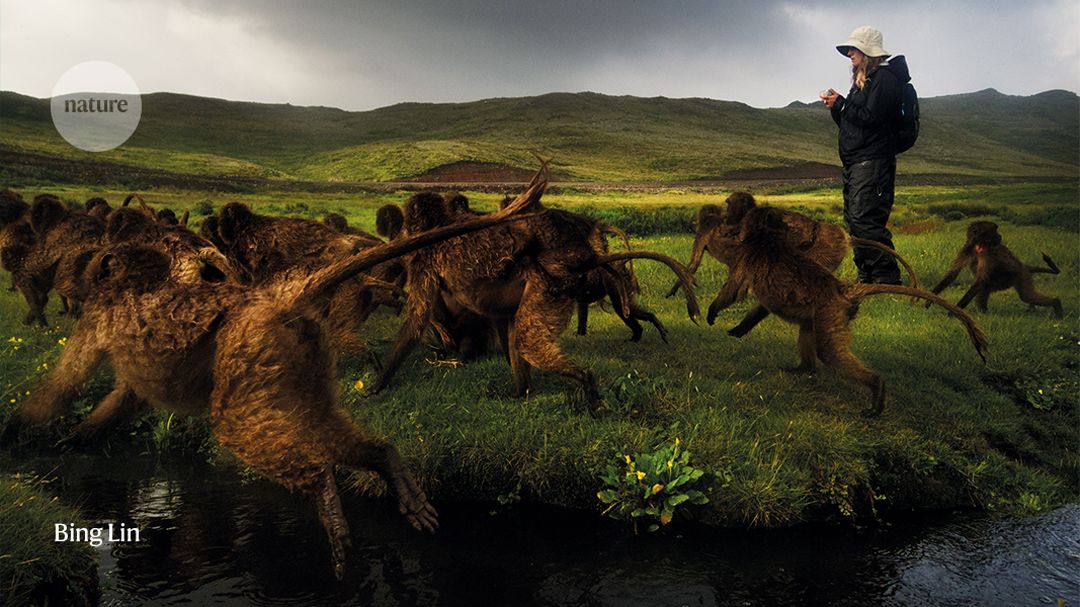 This article is also available as a pdf version.

For a year in the Ethiopian highlands, Bing Lin followed gelada monkeys with a digital notepad. “We did focal follows,” Lin explains. “You follow a monkey around for 15 minutes recording exactly what it does, who it interacts with, what it eats, where it walks. And then, you move on to a different monkey.” Lin took a break, as storms gathered, to photograph one of these processions in action.

Gelada monkeys (Theropithecus gelada) are among the last surviving species of monkey that subsist mostly on grass. Lin was a field manager on-site in Ethiopia for 13 months from June 2017, studying the monkeys with two colleagues. They lived in tents for the year. To the right of the frame is Iris Ruby Foxtrot, Lin’s co-manager in the field.

The action picture is the winner of Nature’s 2022 #ScientistAtWork photography competition, which returned this year after a pause triggered by the pandemic. We received 123 entries from around the world. Runner-up pictures are highlighted here. All will receive a prize, as well as a year’s subscription to Nature. Five Nature art editors and two guest judges selected the winning entries.

Lin captured the monkeys on camera during a teaching fellowship after an undergraduate degree in ecology and evolutionary biology at Princeton University in New Jersey. He is now a third-year PhD student in science, technology and environmental policy there. He looks back on his time with the monkeys with a wry fondness. “Knowing what the rainy season is like, I was probably soaked,” he says.

Here are the rest of the winning images from the competition.