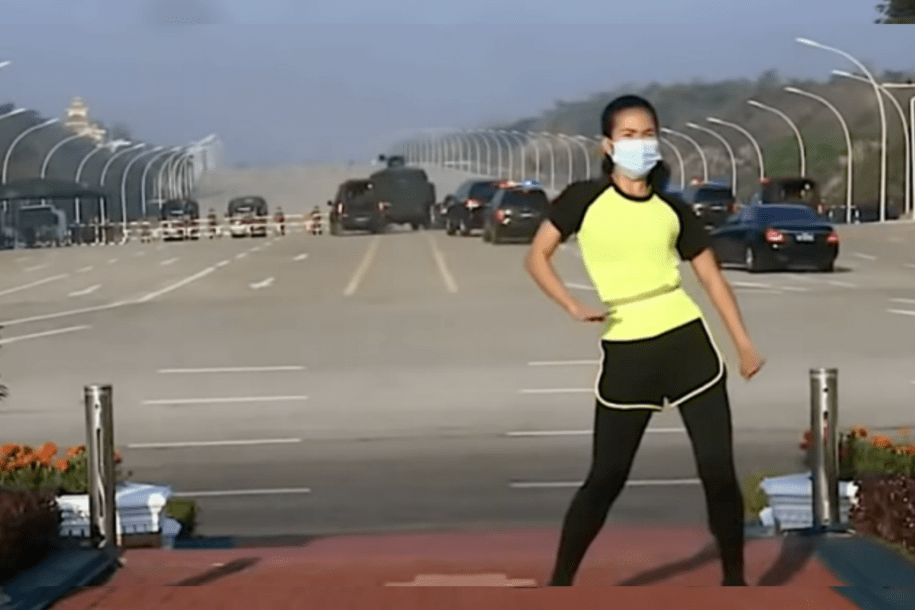 Her post garnered more than 60,000 reactions on Facebook and was reposted thousands of times on Twitter with one post alone having over 16.5 million views. Social media users compared the incident to something they’d see on the show Black Mirror, a popular dystopian TV show, and even photoshopped Hnin Wai in other historical moments.

A woman did her regular aerobics class out in open without realizing that a coup was taking place in #Myanmar. A Military convoy reaching the parliament can be seen behind the woman as she performs aerobics. Incredible! pic.twitter.com/gRnQkMshDe

After people questioned the authenticity of the video, Hnin Wai not only shared a post with other videos but issued a statement on why she continued dancing and confirmed to BBC News that it is genuine. “I wasn’t dancing to mock or ridicule any organisation or to be silly. I was dancing for a fitness dance competition,” she said. “As it isn’t uncommon for [Naypyidaw] to have an official convoy, I thought it was normal so I continued.”

The music used in Hnin Wai’s video was quickly identified by Indonesian social media users as “Ampun Bang Jago,” a popular song that begins with sirens, The Washington Post reported. According to the Post the song has been used frequently at protests and other demonstrations—this makes it an interesting coincidence that Hnin Wai’s dance video used it.

Before declaring a state of emergency and taking power, Myanmar’s military detained state counsellor Aung San Suu Kyi and other ruling party officials following raids on Monday. Phone and mobile services were also cut in the capital as the military announced it would take over the government for the next year. The move follows a decade-long transition to civilian rule and allegations that Aung San Suu Kyi’s party won last year’s election due to fraud.

Multiple countries including the United States have condemned the military’s actions, however, the Biden administration is still debating whether or not to label the takeover a coup, CNN reported. Officially declaring the incident a coup would legally bind the U.S. in cutting off foreign assistance to Myanmar’s government. The possibility of new sanctions was also mentioned by Biden in a statement Monday.

“The military’s seizure of power in Burma, the detention of Aung San Suu Kyi and other civilian officials, and the declaration of a national state of emergency are a direct assault on the country’s transition to democracy and the rule of law,” Biden said. ”For almost a decade, the people of Burma have been steadily working to establish elections, civilian governance, and the peaceful transfer of power. That progress should be respected.”

“The United States removed sanctions on Burma over the past decade based on progress toward democracy,” he continued, using another name for Myanmar. “The reversal of that progress will necessitate an immediate review of our sanction laws and authorities, followed by appropriate action.”

Despite the Biden administration’s debate on whether or not this incident was a coup, multiple news outlets have declared it as such. Additionally, some conservatives have argued in favor of coups using the Myanmar event as a successful example. But the coup has not only raised concerns because of its conservative support but because of the doubts neighboring countries are having on the new regime not honoring promises to repatriate Rohingya Muslim refugees, including those in Bangladesh, according to Forbes.

Rohingya Muslims have faced violence in Myanmar for generations and as a result, have fled to neighboring countries in efforts of finding asylum. According to Daily Kos, a report last year found that the Rohingya population was not only facing genocide but those still living in the state of Rakhine lacked access to education and healthcare and are “forced to live in conditions akin to prison camps.”

US envoy to Afghanistan resigns in wake of chaotic withdrawal