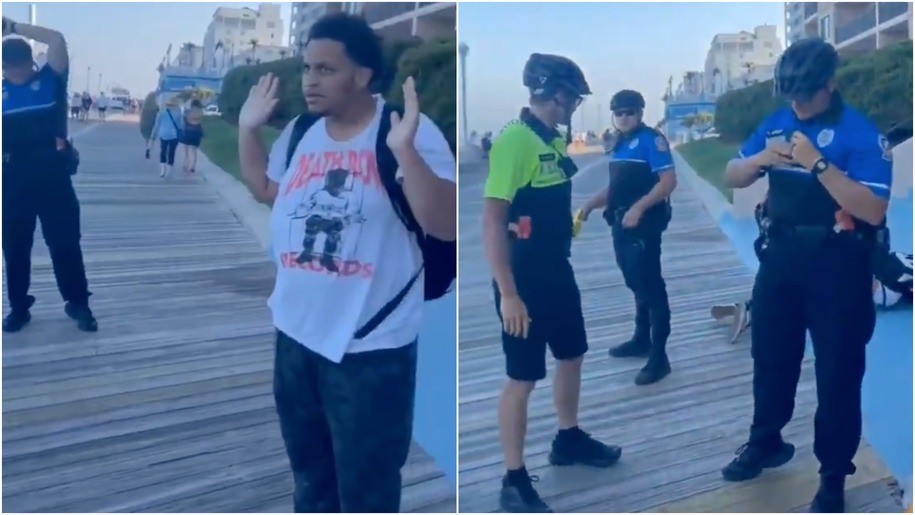 Khalil Dwayne Warren, 19, was accused of doing nothing more than “standing on private property next to two ‘no trespassing signs'” when officers targeted him. He ended up facing charges of trespassing and resisting/interfering with an arrest. “We are aware of the social media videos circulating regarding this incident,” city officials said in their release. “Our officers are permitted to use force, per their training, to overcome exhibited resistance. All uses of force go through a detailed review process.

“The uses of force from these arrests will go through a multi-level examination by the Assistant Patrol Commander, the Division Commander and then by the Office of Professional Standards.”

The teenager who had his hands up and was not in any way physically interacting with police (let alone physically resisting) when he was tasered, collapsed unconscious on the ground, was then hogtied, and placed in a police van.

Although there have been conflicting reports of the ages of those involved, none were older than 20 years old according to the police officials’ account. The confrontation allegedly started when officers saw what they described as “a large group vaping on the boardwalk.” The officers approached the tourists, asked them to stop vaping, and the group walked away, city officials said. “As the group walked away, officers observed the same male start vaping again,” city officials said. “During the course of the interaction, the male refused to provide his proof of identification and became disorderly. A large crowd of people began to form around the officers.”

The situation escalated when officers tried to arrest Brian Everett Anderson, 19, for what officials described as “failure to provide necessary identification for the violation of the local ordinance.” Authorities claimed in the release that “Anderson began to resist arrest” and was ultimately charged with disorderly conduct, resisting/interfering with an arrest, assault in the second degree, and failure to provide proof of identity. “During the interaction with Anderson, Kamere Anthony Day, 19, Harrisburg, PA, was yelling profanities and approaching officers during the lawful arrest,” authorities said. “Officers placed a marked police bike in front of Day and advised him to back up. Day refused to comply with the officer’s orders, continued yelling profanities while attempting to approach the officers placing Anderson under arrest.”

Officials said “officers approached Day to place him under arrest for disorderly conduct” and he “resisted arrest.” The city added that as officers and public safety aides tried to “provide a perimeter to separate the aggressive and hostile crowd” and “the officers making an arrest,” they saw Jahtique John Lewis, 18, push one of the aides in the chest while yelling profanities. Officials also accused John Lewis of picking up a police bicycle and trying to hit an aide with it.

“John Lewis assaulted the Public Safety Aide again,” officials said. He was arrested and charged with disorderly conduct, failure to obey a reasonable and lawful order, obstructing and hindering, assault in the second degree and resisting/interfering with an arrest. All four of the men arrested were released on their own recognizance after appearing before the Maryland District Court Commissioner.

this video was sent to me by a woman named lauryn (insta @/lodogray) of four young men being arrested and abused by police in ocean city, maryland over a vape.

The incident follows both national and local calls for measures to hold officers accused of excessive force accountable. In Brooklyn Center, Minnesota, about 10 miles north of the Hennepin County Courthouse where ex-Minneapolis police officer Derek Chauvin stood trial for murdering George Floyd, a white cop shot and killed 20-year-old Daunte Wright. Kim Potter, who later resigned her position with Brooklyn Center police, said she mistook her gun for her Taser and fired at Wright, a Black man, after he was pulled over on April 11 because his air freshener blocked a portion of his rearview window.

In Ocean City, the police department has been the subject of increased scrutiny following its policing of the city boardwalk, a popular spot amongst tourists visiting the area. Ocean City police are investigating Lt. Frank Wrench to determine if the force he used in video showing him punching and wrapping his arm around the neck of a 20-year-old white man accused of carrying an open container of alcohol. “You can tell he was getting mad from what I was saying and right when I called him a ‘pig,’ that’s when he got mad, came over, grabbed me by my throat and punched me in my face and then put me in a chokehold for literally no reason,” Taylor Cimorosi, the accused man, told Delmarva Now. “I was really just speaking my First Amendment. And I just, I feel like that cop shouldn’t be, shouldn’t have a badge no more.”

Maryland Gov. Larry Hogan vetoed three police reform bills the General Assembly passed earlier this year to mandate police use of body cameras by July 2025, limit no-knock warrants to emergency use only, and allow greater access to police discipline records, the Associated Press reported. The package of legislation would have also meant harsher penalties in excessive force cases, including 10 years in prison if excessive force leads to death or serious injury.

Maryland House Speaker Adrienne Jones mentioned the reform effort in a tweet on Monday condemning how officers handled the tourists on the Ocean City boardwalk. “The video from this weekend in Ocean City is deeply disturbing. Vaping on the Boardwalk is not a criminal offense,” Jones said in the tweet. “Black and brown children should not be tased while their hands are up. Officers should not kneel on the back of a minor. Vaping should not yield a hog tie.”

These Ocean City cops are a total disgrace. They exacerbated the situation with unnecessary brute force, and they need to be FIRED.

Their actions are not protecting or serving anyone. https://t.co/9N8PnEH9jU

“Each of these actions is why the Maryland General Assembly passed police reform this year. I urge Ocean City officials to make review of this incident a top priority, dismiss the overzealous charges against this young man and reform or retrain officers on use of force immediately.”

Sherrilyn Ifill, the president and director-counsel of the NAACP Legal Defense and Educational Fund, made a similar request in a tweet Sunday, tagging Maryland’s Democratic attorney general and Rep. Andy Harris of Maryland. Ifill wrote: “Attorney General @BrianFrosh can you please investigate these multiple incidents involving police and unarmed Black teens in Ocean City, MD? @RepAndyHarrisMD is this your district??”

View other responses from social media below:

The police brutality video from Ocean City is horrific.

That officer should be arrested IMMEDIATELY.

To the young Black men who intervened & put their lives on the line to save that young person – your courage is as immeasurable as it is heartbreaking.