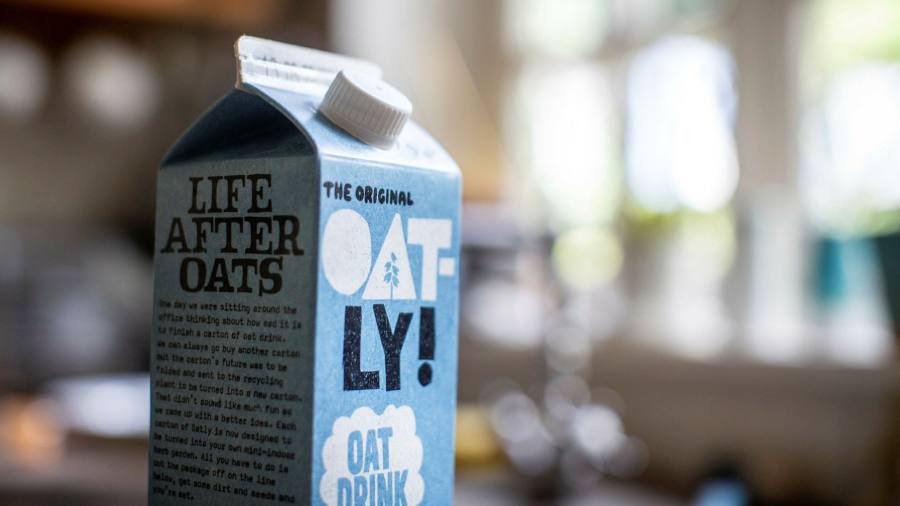 Oatly, the Blackstone-backed Swedish vegan milk maker, is eyeing a valuation as high as $10bn in a US listing that would tap into both the IPO boom and consumers’ growing thirst for plant-based alternatives to animal products.

The Malmo-based group said on Tuesday that it had submitted a confidential filing for an initial public offering with the US Securities and Exchange Commission, less than a year after a funding round led by Blackstone also brought in Oprah Winfrey and Jay-Z’s Roc Nation company as investors, valuing Oatly at about $2bn.

Two people briefed on the situation said it was looking at a New York listing with a valuation as high as $10bn. Oatly declined to comment.

The main aim of the float would be to raise money to fund growth, said one of the people, but a listing would offer a chance to cash in for investors who range from Blackstone to the Hollywood actor Natalie Portman and the Belgian family investment group Verlinvest, which bought a majority stake in Oatly five years ago.

Oatly sold about $200m of products in 2019, roughly double the previous year, and had aimed to double sales again in 2020, though no figures have been made public.

The oat milk specialist, which also makes plant-based ice cream and yoghurt, has tapped into growing demand for plant-based equivalents to dairy, fuelled by environmental concerns — especially around emissions from cattle — and a perception of such foods as healthy.

In the US, total retail sales of non-dairy milks rose 28 per cent to an estimated $2.9bn in 2020, according to market researchers Mintel.

That was dominated by almond milk, which accounted for $1.8bn. But according to the Good Food Institute, a research and lobbying non-profit for alternative proteins, consumers have embraced a growing range of plant-based dairy ingredients including seeds, legumes, pulses, grains and nuts.

The institute said sales of oat-based dairy products jumped almost eight-fold in the US in 2019. Oatly’s signature oat milk was especially successful ahead of the pandemic with a “barista edition” used in cafés that produces a froth similar to that of cows’ milk for cappuccinos and macchiatos.

Rival Chobani, a New York-based company that built its reputation on plant-based yoghurts, has also reportedly been considering a listing, while Oatly competes with companies such as France’s Danone, which has branched out from a history in dairy to produce plant-based alternatives such as the Alpro brand.

Oatly faced a customer backlash on social media over its decision to accept funding from Blackstone last year, with consumers criticising the private equity group’s sustainability credentials and a history of support for Donald Trump by its chief executive Stephen Schwarzman.

Oatly said at the time: “Our bet is that when Blackstone’s investment in our oat-based sustainability movement brings them larger returns than they would have been able to get elsewhere . . . a powerful message will be sent to the global private equity markets, one written in the only language our critics claim they will listen to: profit.”

Companies have been rushing to list in recent months and take advantage of an equity market rally that has bolstered IPOs such as that of Blackstone-backed dating app Bumble, which raised $2.15bn in a Nasdaq listing this month, and Israeli mobile games company Playtika, which raised $2.2bn in January.

US tries to soothe French anger over Australian naval pact

Runners and riders to be Japan’s next prime minister

Emma Raducanu wins the US Open