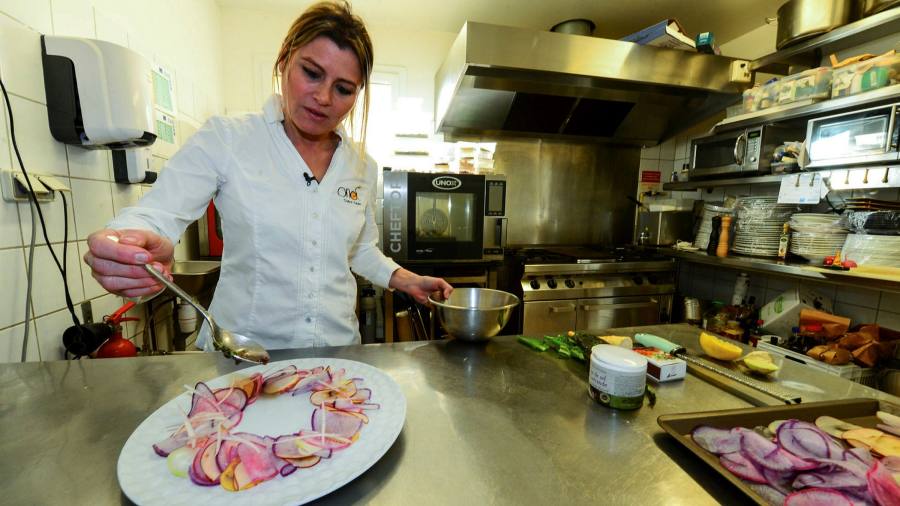 When French chef Claire Vallée wanted to open her first restaurant, banks declined to lend to her because they did not believe a vegan place led by a relative novice and located in a small coastal town would ever succeed.

She has proven them spectacularly wrong. The vegan restaurant she established five years ago with €10,000 raised via crowdfunding recently became the first in France to be awarded a star by the Michelin Guide, the bible of gastronomy.

At ONA — an acronym for origine non animale — the 41-year-old self-taught chef who originally trained as an archaeologist has turned the constraints of cooking without butter, cream, meat or fish into a liberating adventure.

“I make this food because I love it, and I want to show people you can eat differently and still enjoy it,” she said in an interview. “With vegan food, you still have a fabulous hunting ground with so many varieties of grains, spices, and plants. You can really express yourself in the kitchen with so many things to discover and preparations to invent.”

ONA’s elevation by the Michelin Guide made headlines in France and internationally as a symbol that one of Europe’s most classical cuisines was finally opening up to the plant-based food movement that has grown into a big business in recent years. The guide had awarded a star to vegan restaurants in Germany, the US and Spain, but there were none in France.

Ms Vallée’s triumph has also been welcomed by many in the restaurant industry as a rare bit of good news against the grim backdrop of the Covid-19 pandemic. Like all restaurants in France, ONA was forced to close in the spring national lockdown, and after a brief summer respite, they shut again in October with little sense of when they would reopen.

Ms Vallée has used the forced time out to write a cookbook and try out new recipes. ONA pivoted to offer takeaway veggie burgers during the first lockdown and recently started selling vegan foie gras as an alternative to the traditional version popular in France during the festive period. “Algae, chestnuts, peanuts, mushrooms, and Armagnac,” she said, rattling off the ingredients proudly. “It melts in the mouth just as foie gras does.”

That Ms Vallée dares to sell vegan foie gras in Ares, the small town near Bordeaux where ONA is located, said something about her bravery. This part of France is the home of foie gras and churns out more than half of the country’s annual production.

ONA offers a seven-course tasting menu at dinner for €59, and seats about 30 people in its spare white dining room decorated with plants and flowers hanging on the wall. The menu’s list of unusual ingredients includes black salsify, a root vegetable with an oyster-like flavour, and dulse, a type of seaweed.

Gwendal Poullennec, international head of Michelin Guides, said he hoped ONA’s selection would “upset the conventional wisdom about French cuisine” to show that today’s gastronomy was more varied than the cliché of rich buttery sauces and beloved dishes such as coq au vin or blanquette de veau.

But veganism remains far rarer in France than in the US or the UK, making it a tough sell for restaurateurs. There are vegan restaurants in Paris, but few elsewhere. Eating out as a vegan remains a challenge in a country where meat and fish still dominate the plate, cheese is basically a national religion, and fresh breads and pastry are a daily pleasure.

Traditional hotel and cooking schools in France do not really teach vegetarian or vegan cooking techniques, which makes Ms Vallée’s achievement all the more remarkable, said Karine Castro, who consults for restaurants at the Institut de la Gastronomie Végétale. “I have seen that chefs often lack the knowledge to produce vegetable-based cuisine that is sufficiently elegant, gourmet and sophisticated,” she said.

Alexis Gauthier, a French chef who owns the Gauthier Soho restaurant in London, said ONA’s Michelin star was a sign of how much had changed on the French culinary scene.

“There have been great chefs like Alain Ducasse and Alain Passard who put vegetables at the centre of their art but there was something holding them back. And I think it was the Michelin,” he said.

Mr Gauthier’s restaurant used to have one Michelin star but when he became a vegan himself and decided to convert his entire menu, the guide told him he would lose it. Such a thing would not happen now that ONA had been awarded the establishment’s imprimatur, he said. “Claire Vallée has shown you can be 100 per cent French, 100 per cent vegan and 100 per cent creative.”

In Ares, Ms Vallée is still trying to digest her win. “It’s been crazy,” she said, adding she has received calls from as far away as Japan and Australia to reserve tables. “It’s reassuring to know we’ll have a lot of clients when we can reopen.”

Oil groups accused of climate deceit in US Congress grilling